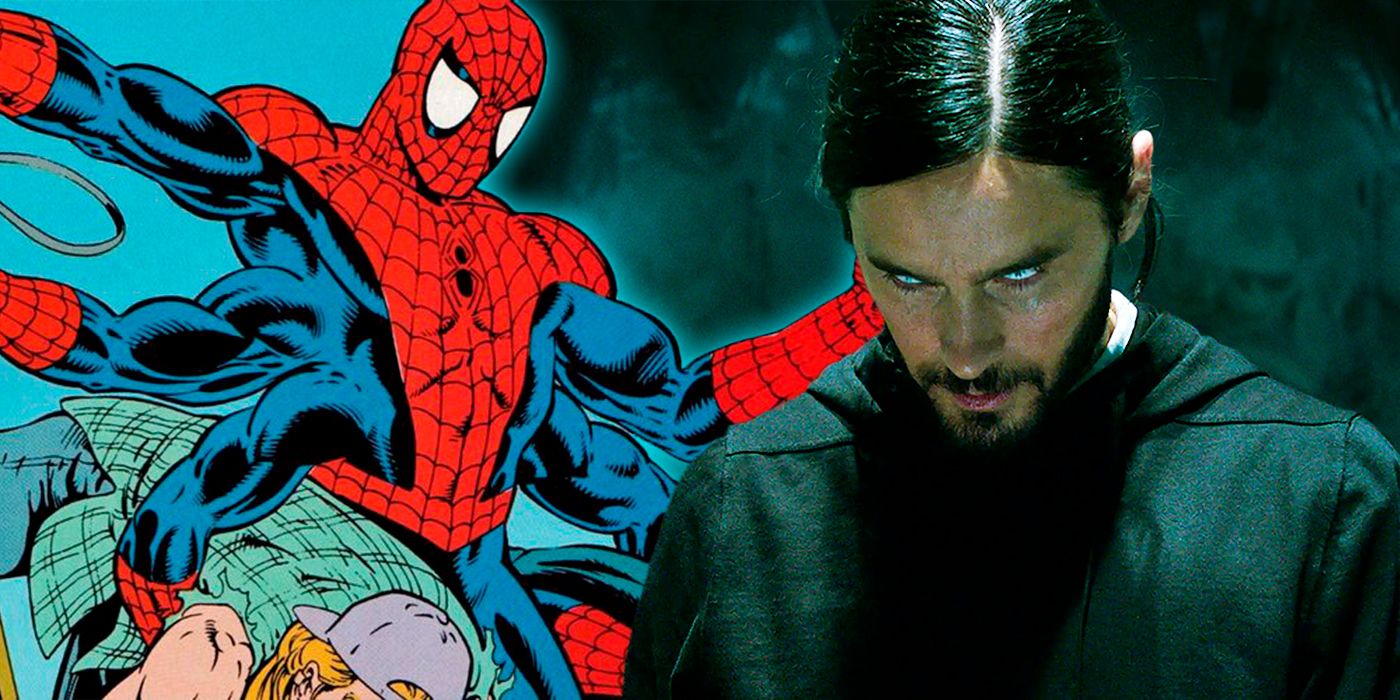 Today, we take a look at how Morbius was the resolution to one of Spider-Man’s strangest stories of all-time.

This is “And Of Course,” where I spotlight particularly outlandish/convoluted comic book plot resolutions.

One of the thing that I like the most about Spider-Man as a character is also what is also probably the most infuriating about the character, which is that he often makes rash decisions and then sort of figures them out after things go horribly wrong. We see it all throughout his comic book history. “Do anything to help stop a crook? Nah.” “Have an alien costume? I guess I’ll just wing it.” “Trade my marriage to save my dying aunt? Makes sense to me!” That attitude was what led to one of the more absurd moments in Spider-Man history.

RELATED: When the Riddler’s ‘Clever’ Plan Involved Him Being Repeatedly Punched in the Face

HOW DID SPIDER-MAN COME TO HAVE SIX ARMS IN THE FIRST PLACE?

A consistent theme throughout Stan Lee’s work on Amazing Spider-Man, particularly once Steve Ditko left the book, was a desire by Peter Parker to give up being Spider-Man and live a “normal” life. That was the plot behind the classic Amazing Spider-Man #50’s “Spider-Man No More!” Well, fifty issues later, in his last issue as the writer of Amazing Spider-Man (he would very briefly return a few months later before then leaving for good), Lee re-visited that idea again, along with artists Gil Kane and Frank Giacoia (Kane and Giacoia do all three issues that we’re looking at today).

In Amazing Spider-Man #100, Peter tested out a potion that would allegedly remove his Spider-power (as otherwise, his sense of responsibility would be too great for him to ignore being a hero if he had powers).

The serum causes him to hallucinate battles with all of his greatest foes before he finally realizes that he HAS to continue to be Spider-Man. Interestingly, the voice in his head that really pushes him to come to that decision is Captain George Stacy, Gwen’s father, who had died a little less than a year earlier. It is fascinating that back in those days, Uncle Ben obviously MATTERED to Spider-Man, but he did not have the same impact that you would normally associate with him nowadays. Instead, it was Captain Stacy who inhabited that role…

but in any event, even as Peter realizes that he must remain Spider-Man, the serum takes a strange turn…

Yes, he hilariously now gained four more arms! The funniest thing about the twist is that, again, Lee left after the issue, leaving quite a weird story for the incoming writer, Roy Thomas, to deal with.

HOW DID MORBIUS, OF ALL PEOPLE, SOLVE SPIDER-MAN’S EXTRA ARM DILEMMA?

Okay, in Amazing Spider-Man #101, Thomas takes over the book temporarily and his first course of action was to get Spider-Man out of the city. Luckily, his old buddy Curt Connors (the scientist who accidentally turned himself into the villainous Lizard) helped Spidey out with a loan of his Long Island beach house (which luckily also came complete with a lab that Spidey could use to help fix the mess that he got himself into)…

Of course, as you are likely also aware, Amazing Spider-Man #101 also introduced a certain living vampire named Michael Morbius. In the issue, he arrives off of the coast of New York City in a freighter where he has killed all of the sailors aboard by draining their blood. His thirst for blood increases despite his attempts to avoid killing people. He jumps off of the boat and swims to shore and, sure enough, he ends up camping out in the same beach house that Spider-Man is at (you might think that that is an awfully strange coincidence, but consider that Spider-Man failed to stop a crook in Midtown Manhattan and that same crook ended up breaking into the Parker residence in Forest Hills, Queens. Spider-Man’s world is ALL about coincidences!).

Morbius attacks Spider-Man and soon overwhelms him and is about to drink his blood when he is interrupted by a visitor. You see, Curt Connors was a nice enough buddy that not only did he lend Spidey the guest house, but he also decides to stop by to see if he could help the wallcrawler out. He was shocked to see Morbius there and, well, that was a problem because when Curt Connors loses control (like if he is shocked or whatever) then he turns into the Lizard! So as Spider-Man groggily comes to, he finds himself in the middle of a fight between Morbius and the Lizard and the prize of their fight is that the winner gets to kill him!

Okay, in the next issue, Morbius wins the fight, but just as he digs his fangs into the Lizard, Spider-Man chases him off and Morbius decides, “Eh, I’ll just go torment an entire city filled with people I could feed off of. Thanks, Spider-Man!”

But then shockingly, the Lizard turns back into Connors, but then back into the Lizard, with Connors in control (for now). He and Spider-Man determine that Morbius’ fangs must contain an enzyme that can turn Lizard back to Connors because…well…shut up, it just does! And since when the Lizard turns back to Connors, he loses an arm, then if Spider-Man takes the enzyme mixed with the serum he put together, he should ALSO lose his extra arms for…reasons!

They hunt Morbius down (as flashbacks fill us in on Morbius’ tragic origin of being a kindhearted scientist who was turned into a living vampire) and sure enough, after getting the enzyme from him, the Lizard turns back into Connors…

Morbius, though, needs the enzyme to live (huh?) and so he steals the serum back and takes off. Spider-Man chases after him and in the end, it appears as though Morbius crashes and seemingly dies…

But not before Spidey snares the serum off of him and they use it and sure enough, Spider-Man loses his extra arms.

That’s it for this installment. Please send in ideas for other comics with convoluted or bizarre plot resolutions to brianc@cbr.com!

KEEP READING: Batman Actually Killed Superman… But He Got Better

CBR Senior Writer Brian Cronin has been writing professionally about comic books for over fifteen years now at CBR (primarily with his “Comics Should Be Good” series of columns, including Comic Book Legends Revealed).

He features legends about entertainment and sports at his website, Legends Revealed and other pop culture features at Pop Culture References.