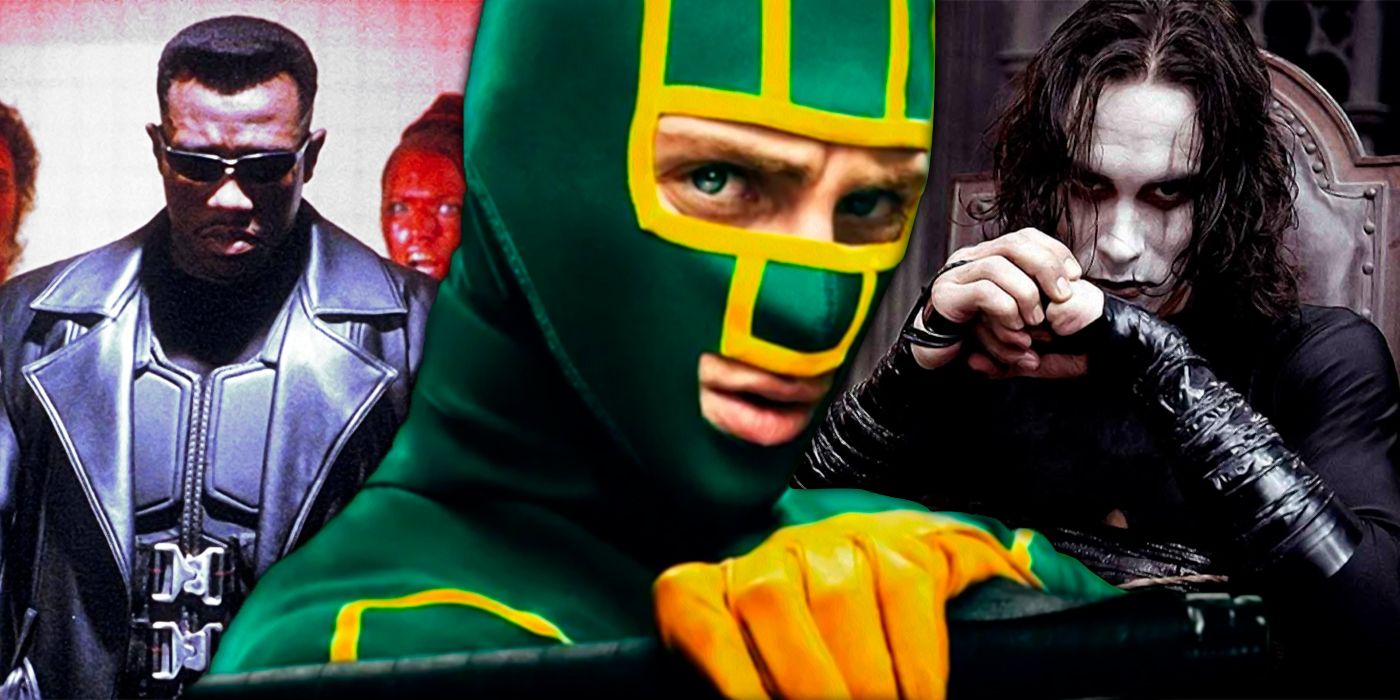 The film propelled Ryan Reynolds’ career into superstardom, making the sci-fi family film The Adam Project possible and paving the way for not one but two highly anticipated sequels. With its intense violence, quirky comedy and charming musical sex montage, Deadpool was often credited as “the first R-rated comic book movie.” But those who claimed this were incorrect. While highly deserving of its many accolades, Deadpool was not the first. And while DC and Marvel movies rarely venture beyond the cozy PG-13 label, many other films have strived to give comic book media an intensely adult edge.

RELATED: The Batman & The Riddler Take Their Trauma to Very Different Extremes

Released after certified box office bombs like Batman & Robin and Steel, the action-packed Blade has long been regarded as the film that saved comic book movies. While not a huge hit with critics, audiences loved the dark adaption of Marvel’s first vampire slayer. Loosely based on Marv Wolfman’s 1973 everyman, this version of Blade is cool, a bit sarcastic and known to vampire kind as a “daywalker.” With Wesley Snipes brilliantly bringing its titular character to life — despite being partially undead — Blade is a must-see for fans of gore, inventive vampire lore and quintessential ‘90s cheesiness.

The Crow Shined a Light in a Dark, Dark World

Starring the late great Brandon Lee in its titular role, The Crow follows the story of Eric Draven, a former musician who — back from the dead by way of a mythical force — seeks to avenge the rape and murder of his fiancée, Shelley Webster. Based on the James O’Barr graphic novel of the same name, the film received both critical and commercial praise upon its release. Holding its R-rating to due language, violence and excessive drug use, The Crow manages to balance the unbelievable ugliness present in the human spirit with a triumphant message about love, hope and light in an often dark world. Following the tragic death of its main star, The Crow has achieved a well-deserved cult following and continues to receive praise today.

RELATED: Zazie Beetz Shares Everything She Knows About Domino’s Future and Deadpool 3

Sin City Is a Must-Watch for Frank Miller Fans

The neo-noir hit Sin City was also a critical and commercial success. Based on Frank Miller’s gritty graphic novels, the film explores the twisted and surreal Basin City — often called Sin City — as well as three of its residents as they love, lose and remain entwined in a web of violent corruption. Sin City stars a multitude of household names, including Jessica Alba, Rosario Dawson, Bruce Willis and the late great Brittany Murphy.

Co-directed by Quentin Tarantino, even Sin City’s harshest critics praise the film for its unique style, stunning cinematography and inventive writing. While its dated dialogue may be sour to today’s sensibilities, Sin City is as captivatingly cool as it is ultra-violent. The film is a must-watch for fans of Frank Miller’s best material.

It could be called a stern cousin of sorts to the comedically twisted universe of The Boys. Watchmen follows the story of several disgraced costumed heroes set in an alternative 1980s America. Unlike The Boys, the film — and the DC graphic novel it’s based on — places little emphasis on commercialization in a world populated by superhumans. Instead, Watchmen shifts its focus to government interference, political intrigue and the nature of life, love and humanity.

Watchmen’s graphic violence, sinister overtones and tricky interpersonal relationships aren’t for everyone. But the film balances the cool, forgotten-era appeal of classic noir and old Hollywood with the harsh, unflinching natures of time, humanity and consequence. Intriguing, romantic and strangely uplifting, Watchmen is well-deserving of its continued success. The film gave way to a popular small-screen adaptation and is currently available for streaming on both Netflix and HBO Max.

Far from a world populated by natural-born superhumans or containing a serum that does all the work, the Kickass universe is almost identical to our own. The undeniable realism of Kickass — based on a comic of the same name — is part of what makes it undeniably fun and equally terrifying. The movie follows Dave Lizewski (Aaron Taylor-Johnson), a painfully average teenage boy whose life takes a wild turn when he decides to don a costume and become the superhero, Kickass.

Featuring one of Nicolas Cage’s best performances, the film achieved both critical and commercial success. Despite the minor controversy surrounding the literal minor Hit-Girl (Chloë Grace Moretz) and her foul mouth and unrepentant acts of rage and violence, Kickass is widely regarded as a fun, sincere, heartfelt and wickedly violent adaptation of its source material.

KEEP READING: The Adam Project Proves Ryan Reynolds Can Do a PG-13 Deadpool – But Should He?