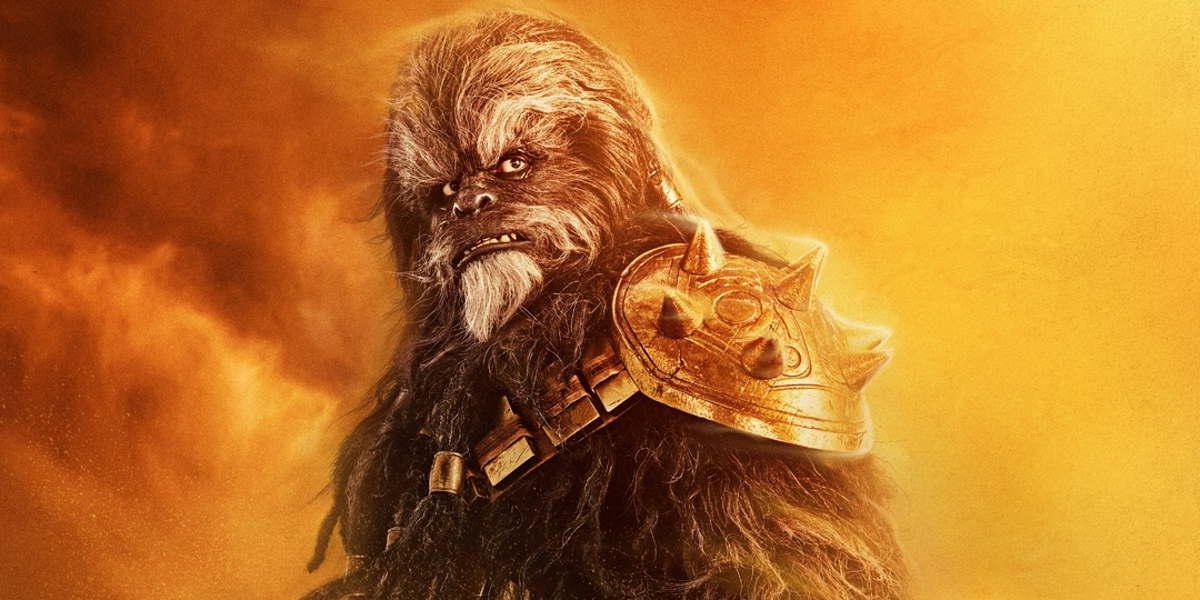 After last week’s episode garnered some backlash for Boba Fett’s new cybernetic, Power Ranger-like bodyguards, The Book of Boba Fett’s “Chapter 4” came back with a fury. Boba exacted revenge on the Sarlacc and the Nikto Speed Riders while reclaiming his Firespray Gunship and gaining an alley in Fennec Shand. Nevertheless, the best part of the episode was a short scene that involved the Wookiee Black Krassantan.

There are a lot of physically strong species in Star Wars that people wouldn’t want to mess with. Wookiees, however, are some of the stoutest, and they have the reputation to boot. It wasn’t long into A New Hope before viewers understood the raw strength of the Wookiee species because, in a bit of now-classic bit of dialogue, George Lucas made everyone aware of the fact that the beasts were known for removing limbs.

RELATED: The Book of Boba Fett Flips the Script on Star Wars’ Most Brutal Moment

The classic scene showed R2-D2 playing Chewbacca in a game of Dejarik. R2 was winning the game, and C-3P0 cheered on his counterpart when Han Solo interjected. The smuggler mentioned that upsetting any Wookiee would be a bad idea because they have a propensity for pulling “people’s arms out of their sockets when they lose.” Clearly alarmed, C3P0 quickly proposed a new strategy to let Chewbacca win, and apparently, the droids did exactly that because both of them maintained their appendages throughout the film. However, while fans knew that Wookiees could easily rip arms off, and even saw it in a The Force Awakens deleted scene where Chewbacca removes one of Unkar Plutt’s limbs, it had never been made canon in live-action — until now.

Black Krrsantan made noise among the Star Wars fandom when he made his live-action debut in Episode 2 as the Hutt Twins’ enforcer. Then, he tried to prove his worth by infiltrating Boba’s court and trying to kill the new daimyo. He wrecked the place, but Boba’s bodyguards protected him long enough for Fennec Shand to trap the enraged Wookiee in the then-empty rancor pit. When the Hutt Twins arrived to make amends, they left Black Krrsantan in Boba’s control, but he let the Wookiee go, knowing that the attack was simply business.

Fortunately, that wasn’t the last that fans got to see of him because, at the end of “Chapter 4,” Boba hired Black Krrsantan to fight against the Pykes. That, however, was after the Wookiee confirmed his arm-ripping strength. Clearly in a bad mood after failing to kill Boba and becoming unemployed, Krrsantan went and ran up a hefty tab at Garsa Fwip’s Sanctuary. After a while, he became enraged at some Trandoshans — a species that notoriously hunted Wookiees — and beat a bunch of them up.

Fwip tried to talk the Krrsantan down by saying that he no longer needed to prove his strength like a gladiator, but Krrsantan was too far gone. He then proceeded to effortlessly remove one of their arms before storming out of the cantina, leaving a bloody mess behind him. Princess Leia might have gotten away with calling Chewbacca a walking carpet, but most people should avoid upset Wookiees.

To see Black Krrsantan join in the fight against the Pykes, watch The Book of Boba Fett. New episodes are available on Disney+ every Wednesday.

Blake Hawkins has written TV and movie features and recaps for CBR since March of 2021. He writes about everything from NCIS to Stranger Things to The Walking Dead and everything in between. Mostly, though, he most enjoys writing about Star Wars. In fact, as recent graduate of Greensboro College’s honors program, Blake wrote his thesis on Star Wars and its religious connections. He now lives with his family in Lynchburg VA and is an avid outdoorsman. Feel free to contact him by email at hawkins.blake12@gmail.com, or find him on Facebook.