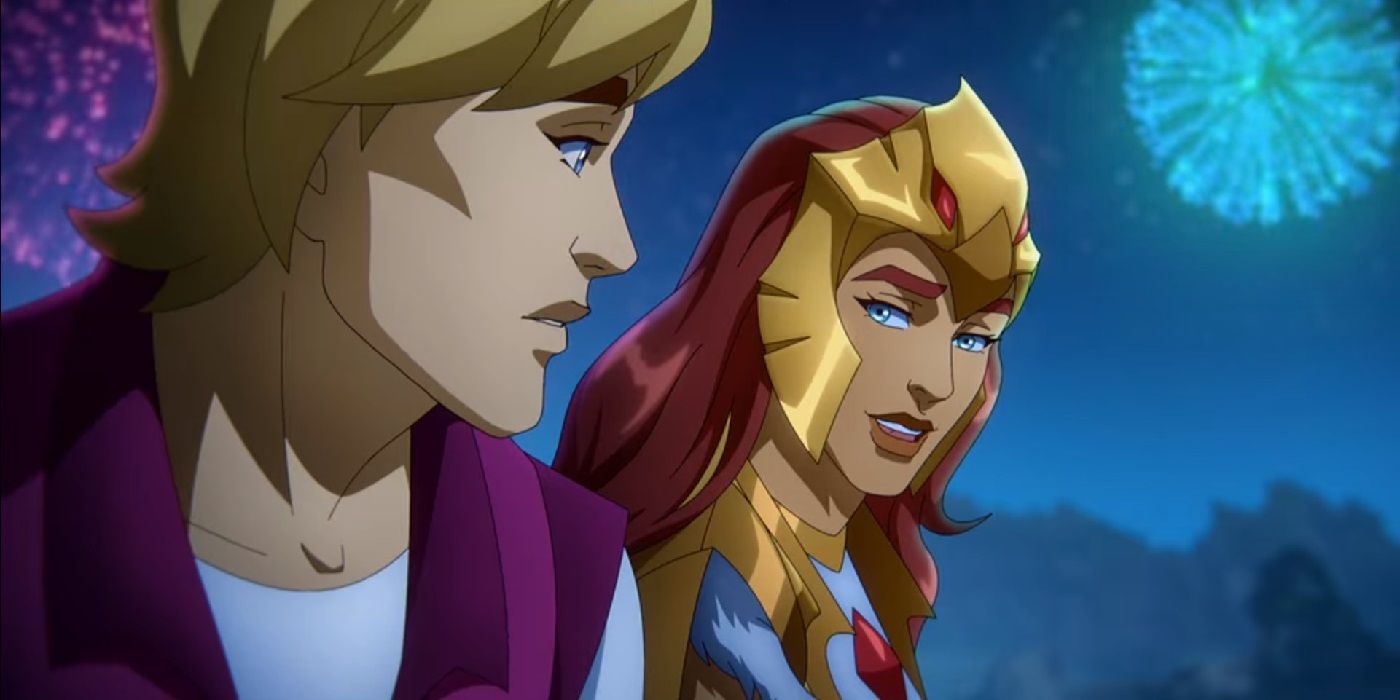 WARNING: The following contains spoilers for Masters of the Universe: Revelation Part 2, now streaming on Netflix.

In Masters of the Universe: Revelation Part 2, Prince Adam and Teela are totally blindsided as Evil-Lyn absorbs the Power of Grayskull, becoming the demigod Dark Lyn. However, while we’d assume either of Eternia’s warriors would be the show’s biggest hero, this goes to an old face that died in Part 1.

As the final battle unfolds, Lyn unleashes an army of the undead, summoning Scare Glow and the ghouls from Subternia. Inside, Lyn’s running amok, using the Sword of Power to best Adam, Cringer and Co., but just when she’s about to deliver a killing blow, a unique red ribbon emerges from the ether, stopping her from doing further harm.

RELATED: He-Man and the Masters of the Universe’s Biggest Plot Holes & Unanswered Questions

It’s none other than Orko, clad in white and manifesting at various points in the castle, including to Duncan/Man-at-Arms and Andra. He guides them to safety, with his main form revealing itself to Lyn; someone he grew close to in Part 1. They both had so much in common, being outsiders their whole lives, and folks who were underestimated, so he wants her to atone.

Lyn, though, is consumed by darkness, but as she tries to hurt Orko, his magic has improved drastically. He’s now a master, using various spells to beat her down, a la Gandalf the White. It’s like watching Doctor Strange in action as he uses energy blasts, shields and teleportation, trying to talk Lyn out of it. He considers her a sister, but sadly, all she wants is to erase the universe that abused them.

Thankfully, as Orko proves to be a distraction, the sword falls to Adam. He then transforms into He-Man, turning Cringer to Battle Cat and even upgrading Skeletor to Skele-God again. He-Man wants his enemy to know what it’s like to fight a villain and save the world, creating a deadly alliance. And it’s all due to Orko as he’s the only one who could bear the brunt of Lyn’s shots.

This allows Teela, who finally embraces the role of Sorceress, to really go after Lyn, with Orko then heading to protect Duncan’s legion outside. There, he proves his kind wrong as they thought he’d be a bumbling screw-up, all as he inflicts fear into and breaks Scare Glow. Eternia’s forces are mightily impressed and grateful, but what’s even more heartwarming is he’s the same genuine Orko from before. He encourages his old friends to keep fighting, and this belief and faith spurs Teela on.

Rather than kill Lyn, Teela convinces her to achieve redemption and step down. It’s the same thing Orko insisted on, indicating that Lyn still had that heroic light in her from the wars they went through in Part 1. Teela’s taken inspiration from this, and as such, she and Lyn fix the damage caused, banishing Skeletor’s sinister squad and Subternia’s eerie legion too.

And as a reward, when Subternia’s forces head back to the afterlife, rather than Orko ascending too after he perished in that realm, Lyn holds him back and allows him a second life. He deserves it for being so brave and stopping her at a crucial moment, because had she killed Adam, it’s unlikely that Skeletor and Teela would have rallied to fight back and stop her. Thus, Orko’s the unlikely catalyst for victory and someone Eternia owes an invaluable debt.

The entire 10-episode first season of Masters of the Universe: Revelation is now available on Netflix.

KEEP READING: The He-Man Reboot’s Theme Is Terrible – and You’ll Never Get It Out of Your Head

Last Airbender: Bloodbending Isn’t the Most OP Waterbending Technique
How the X-Men Lost Their Most Powerful Partner – and Why That Loss Is So Personal
My Hero Academia: Katsuki Bakugo’s X Best Fights, Ranked | CBR
PlayStation’s Best-Selling Game of 2021 Is Now Owned by Microsoft
Xbox Fans Want Microsoft’s Clippy in Call of Duty | CBR