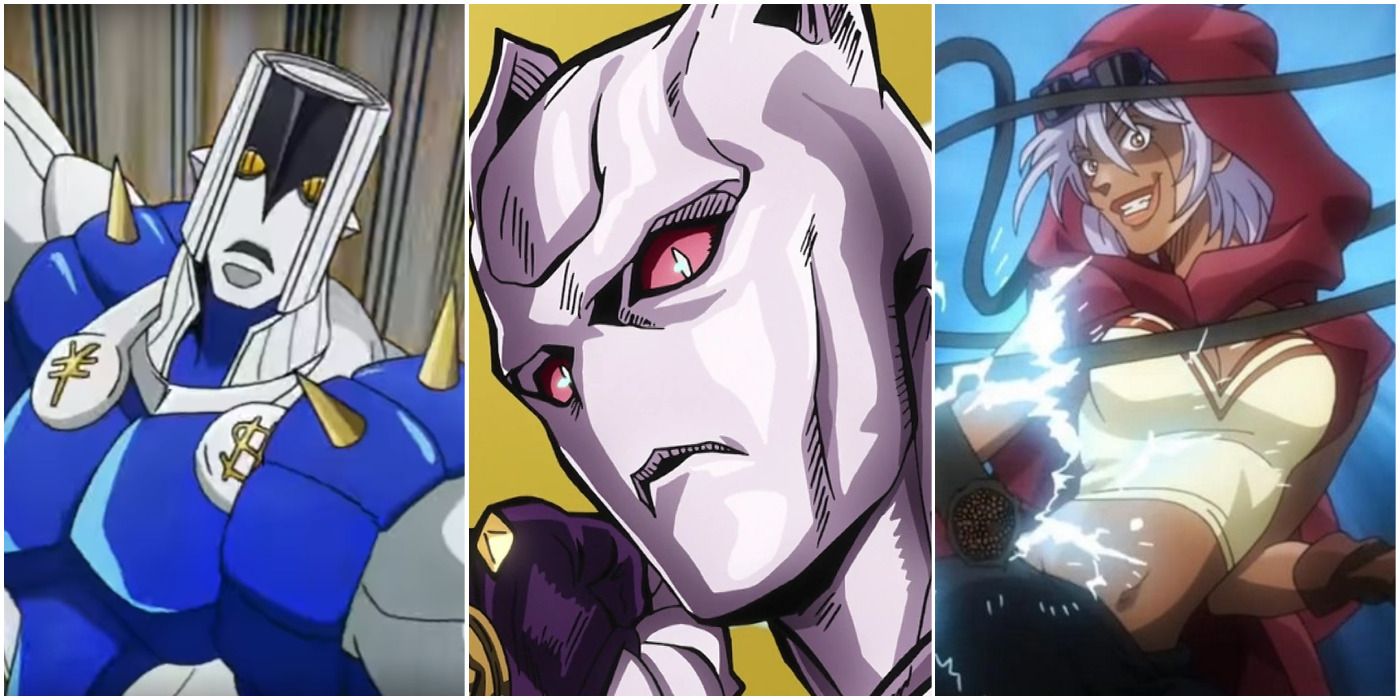 The story of JoJo’s Bizarre Adventure evolved its combat system partway through, trading Hamon and vampires for the creative concept of Stands, or the physical manifestation of a person’s spirit. Stands come in a dazzling variety of shapes and sizes, and some of them are truly vicious and deadly. Others are subtle or even pacifistic in nature, such as Tonio’s Pearl Jam.

10 Cream Can Devour The Battlefield With Ease

When it comes to collateral damage in battle, the deadly Stand called Cream isn’t too bad, but it can still cause serious damage to the terrain all the same. Cream is a Stand that can instantly devour anything in its way, including people, and nothing will remain of them.

If Vanilla Ice misses the target with his Stand, Cream will carve out smooth gouges in the floor or on the walls, and there’s no way to restore that material once it’s lost. Cream claimed two victims before Polnareff finally defeated Vanilla Ice.

9 The Hand Can Also Erase Things

The Hand is a humanoid Stand from the Diamond is Unbreakable story arc, and its user, the JoBro Okuyasu Nijimura, is rather careless and sloppy with it, resulting in a fair amount of collateral damage. When The Hand swipes its right hand, it can erase something, including empty air.

The Hand can end up erasing pieces of nearby buildings or items whenever its attacks miss the intended target, and there is no way to restore the lost materials once The Hand has struck. Even Okuyasu doesn’t know where the erased things go. Unless the user is careful, some irreparable damage is sure to occur.

Muhammad Avdol is Joseph’s friend, and he is also the wielder of the first full Stand ever seen in the series, the phoenix-like Magician’s Red. This Stand can create vast quantities of flame, and Magician’s Red fought a fierce duel against Polnareff’s own Stand, Silver Chariot.

RELATED: 10 Destructive Anime Villains Who Cause The Most Collateral Damage

Avdol is a smart and careful fighter, but all the same, Magician’s Red is liable to cause serious damage to nearby terrain or property during a fight, with all that fire going everywhere. Fighting with this Stand in a forest is bound to get messy in a hurry.

7 Purple Haze Will Infect Anyone Who Gets Close

Pannacotta Fugo is an aggressive and short-tempered Stand user in the Golden Wind story arc whose humanoid Stand, Purple Haze, shows no mercy. It’s not just a melee fighter — Purple Haze can also open the capsules on its knuckles to release a deadly virus that kills in seconds.

Fugo even admitted that this Stand is risky to use, since that virus will kill anyone who gets too close, friend or foe, or even Fugo himself. The range may be short, but the virus’s power is absolute, and Purple Haze can’t restrain itself even if it tries. That’s why Fugo hesitated to use it, but Giorno found a way to devise immunity for himself all the same.

6 Aerosmith Sprays Bullets All Over The Place

Some long-ranged Stands are precise, such as Rat or Guido Mista’s Sex Pistols, but then there’s Aerosmith, the Stand of the punkish Narancia Ghirga. It’s shaped like a toy airplane, and it can rapidly fire hundreds of tiny bullets all over the battlefield to mow down its enemies. It’s not exactly a sniper.

RELATED: 10 Destructive Anime Heroes Who Cause The Most Collateral Damage

Aerosmith can tear up property with those shots, such as cars and telephone booths, and Narancia never seems to care much about collateral damage. On top of that, Aerosmith can release a single bomb to dispatch a foe, and that certainly causes collateral damage, too. Whatever it takes to win.

Although Yoshikage Kira the serial killer wants to keep a low profile, he wields a Stand, Killer Queen, that never fails to make a huge ruckus while in use. Killer Queen’s power is based on explosions, and it can touch any item to turn it into an explosive. Then, Killer Queen can set it off at will.

Even a fairly small explosion is sure to cause some collateral damage, especially since Kira tends to operate in the urban confines of Morioh Town, where he lives. The heart-seeking Sheer Heart Attack is also explosive, and may cause collateral damage, too.

Even by JoJo standards, Notorious B.I.G. is a strange ability to have, and this Stand only activates once its user, Carne, dies. Then, Notorious B.I.G. will go on a rampage, and as far as Giorno can tell, nothing can quench its infinite hunger.

Notorious B.I.G. can eat anything and grow larger, and it moves quickly, too. This Stand took apart an entire airplane during its sole fight scene, and conceivably, Notorious B.I.G. would cause far more damage if it operated in Italy’s streets, growing out of control.

During the Stardust Crusaders story arc, Joseph Joestar and his friend Avdol ran afoul of Mariah, whose tricky Stand, Bastet, isn’t well-suited for dueling. For the most part, it’s an awkward and silly Stand to use, but it does have some merit, and it definitely causes serious collateral damage in an urban setting.

Anyone who unwittingly touches Bastet will become magnetic and start attracting bigger and bigger metal items, from coins and jewelry to bicycles and even cars. Soon, Joseph and Avdol were causing chaos in the streets just by being so magnetic.

2 Oasis Can Bring Entire Buildings Down

Secco is an eccentric Stand user who wears his Stand, Oasis, like a suit of armor. He has an affinity for the earth, and can swim through soil and concrete as though it were water, then pop up out of nowhere to ambush his enemies. He can also spit out soil and make it rain back down as hardened spears.

But that’s not all. With Oasis, Secco can destabilize buildings from underneath and send them crashing down. Usually, he does this to combo with Green Day, forcing the people inside those buildings to become physically lower and thus vulnerable to Green Day’s effects.

The cruel Stand user Cioccolata is like a horror movie villain, with or without his Stand. He once verbally abused elderly patients at a hospital and drove them to take their own lives, and he committed countless heinous acts as a doctor, but when he acquired Green Day, Cioccolata became even deadlier.

Green day spreads a fatal green mold all over the place, and it can easily spread from one person to another, especially if the victims become physically lower, such as crouching or going down some stairs. It’s been said that Green Day, given the chance, can infect an entire city while trying to infect and kill Cioccolata’s actual enemies, and that’s some serious collateral damage. Fortunately, it never got that far during the fight against Giorno’s party.

NEXT: My Hero Academia: 10 Quirks That Cause Too Much Collateral Damage


Next
One Piece: 10 Storylines That Went Absolutely Nowhere