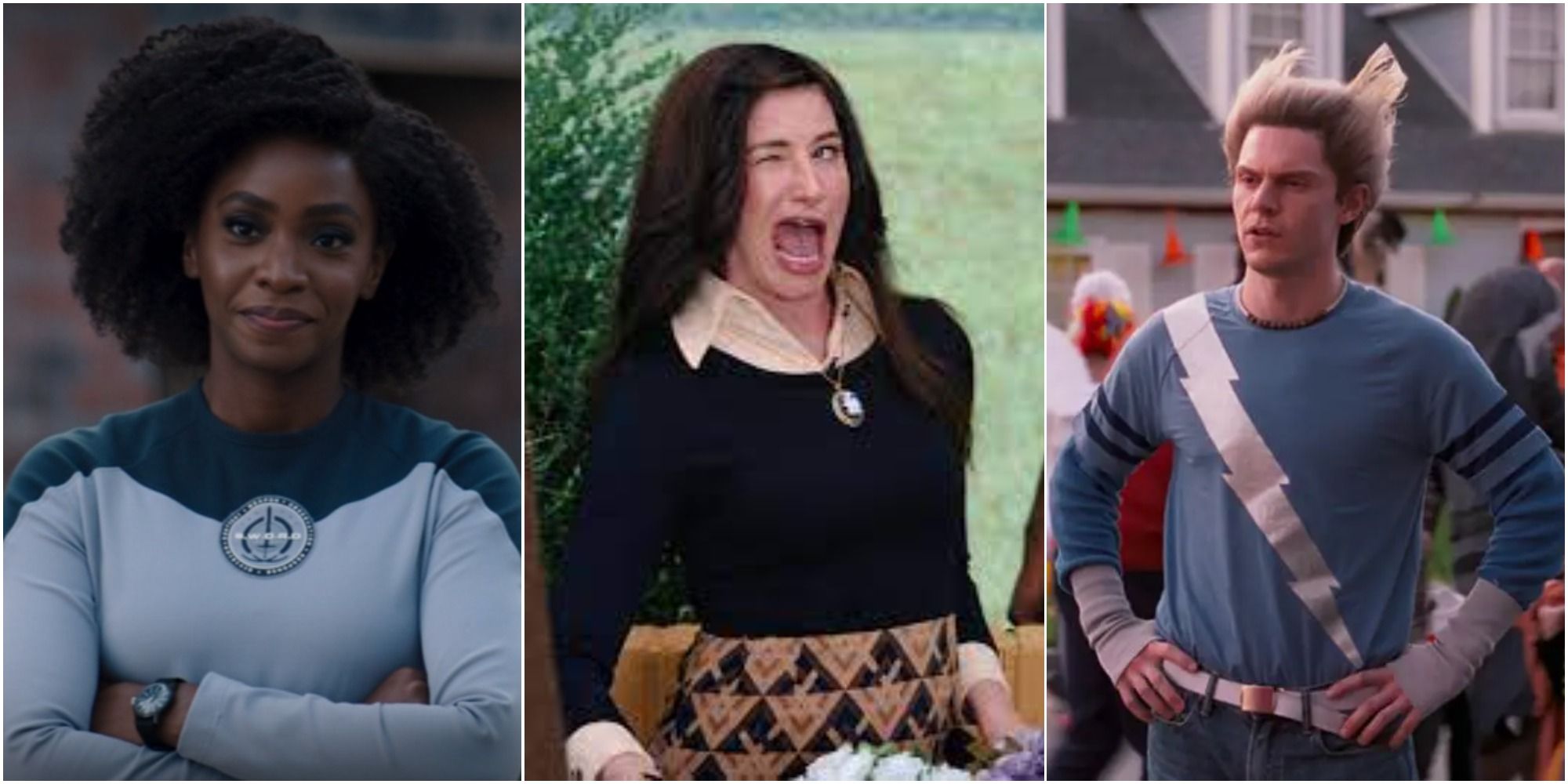 WandaVision kicked off Marvel’s new focus on television shows definitively set in the Marvel Cinematic Universe. WandaVision is considered by many to be the best Marvel show on Disney+ so far, and much of that high regard can be attributed to the unique premise and cast of likable characters. Unfortunately, the standalone nature of WandaVision means that most characters will not be seen in the MCU again.

While much of the focus was understandably on Wanda and Vision, the sitcom format meant that there needed to be plenty of funny side characters to accurately represent the genre. Marvel undoubtedly succeeded in that regard, introducing many characters that fans won’t soon forget despite their limited screen time.

White Vision is a recreation of the original synthezoid built by S.W.O.R.D. after studying Vision’s body. When Vision in the Hex fought White Vision, they came to an understanding that neither was the true Vision, but what made Vision complete was his experiences. White Vision now has Vision’s memories, but without his emotions and personality, White Vision lacks what made the original so likable.

Though fans were understandably disappointed that the surprise actor Paul Bettany “always wanted to work with” ended up being himself, White Vision’s existence sets up some interesting possibilities for the future. For now, fans can only speculate when and where the new Vision will show up again.

Despite never having a big part, Dennis the mailman still appeared in most episodes, delivering mail or lingering in the background. Denni was an unexpected hit with fans and he ended up spawning memes, theories, and even a music video.

Though he didn’t play a big part in the series, and none of the fan theories panned out, Dennis’ small amount of screen time was still memorable. In reality, Dennis delivers pizza rather than mail, and he is one of the few characters whose name outside of Wanda’s Hex was not revealed.

Tommy is one of Wanda’s twin children and is much more mischievous than his brother. Tommy appears to think highly of himself and bullies his brother at times. Regardless, it was fun to watch Tommy bond with his similarly unruly “uncle.”

Though Tommy was less likable than his brother, he has his redeeming qualities and still has a chance to grow and mature. He may not be as sensitive as his brother, but family means just as much to Tommy as it does to Billy.

7 Phil Was A Hit For His Resemblance To David Schwimmer

Harald Procter was a piano teacher in Westview, but he was known as Phil Jones in Wanda’s television sitcom reality. Phil immediately resonated with audiences from his first unfortunate appearance.

Vison became even more worried about having his boss over for dinner when he observed Phil packing up his things after being fired for hosting a bad dinner party of his own. Adding to Phil’s likability with audiences, fans were quick to notice that he bears a resemblance to Ross from Friends.

6 Norm Was A Great Co-Worker For Vision

Norm was Vision’s co-worker at Computational Services Inc. in the sitcom version of Westview. Norm’s real name was Abilash Tandon before he fell under Wanda’s control, like all the other residents of Westview.

It was Norm that added to Vision’s suspicions that something in Westview wasn’t right when he couldn’t explain to Vision what the company actually did. Norm was a highlight for his funny banter and friendship with Vision, and few could forget Norm’s reaction to using a computer for the first time.

5 The Ralph Reveal Disappointed Fans But They Still Liked Quicksilver

Fans were understandably excited when Pietro returned in Wanda’s reality, and they were even more excited when Even Peters was brought in to portray Pietro. Unfortunately, it became clear pretty quickly that this wasn’t Wanda’s brother at all. Rather than summoning Quicksilver from Fox’s X-Men universe, Agatha used her magic to transform Westview resident Ralph Bohner into Pietro.

Fans were ultimately disappointed with the way it all happened, and though Ralph did have his moments, he ultimately wasn’t as likable as any other version of Quicksilver. As funny as it was to see that he was who Agatha was talking about every time she referenced her husband Ralph, an actor of Evan Peter’s caliber shouldn’t be wasted on a one-off gag.

Herb was one of the most friendly residents of Westview and happened to be Wanda and Vision’s next-door neighbor. Herb was involved in some of the most memorable sitcom jokes, like the chewing gum “mastication” gag.

RELATED: 10 Ways WandaVision Is Nothing Like House Of M

Likewise, Herb was also involved in one of the most memorable “glitches” when he started cutting the wall rather than his hedges, tipping Vision off that something was wrong. Whether it was Wanda or Agatha stopping him from saying anything, fans really felt for Herb when he wanted to tell Vision what was happening but was magically refrained from doing so.

3 Billy Was The More Likable Twin

As the nicer and better-behaved child, Billy ended up being much more likable than his troublemaking brother. Billy is sweet and adorable, and his reserved nature makes it easier for audiences to empathize with him.

Billy and Tommy were not seen at the end of WandaVision, but they were heard calling out for Wanda’s help. Their location may be unknown, but fans of the twins will almost certainly see them again soon.

2 WandaVision Reintroduced Fans To Monica As An Adult

Fans were first introduced to Monica Rambeau in her sitcom persona, Geraldine. Technically, Monica’s first appearance was in Captain Marvel. However, it is in WandaVision that viewers are first introduced to her adult self in the present day, allowing viewers to meet the character all over again.

Outside of the Hex, Monica is just as much of the protagonist as Wanda. Now that she has her Spectrum powers, fans can’t wait to see Monica evolve into a true superhero in The Marvels.

Though she was the villain of the series, fans loved every minute of Kathryn Hahn’s character, both as Agatha Harkness and as nosy neighbor Agnes. When Agatha was revealed as the villain, the “Agatha All Along” song blew up on social media. Likewise, Agnes was one of the funniest characters in the sitcom reality.

As soon as the series ended, fans were already wondering when they would see Agatha again. Although it is unknown when she will be back, the good news for fans is that the door is open for her to return soon. With Wanda leaving Agatha trapped in her sitcom “role,” fans will likely get to see Agnes one more time before Agatha is free once again.

NEXT: WandaVision: 5 Things It Got Right From The Comics (& 5 It Ruined)


Next
Loki’s 5 Greatest Strengths (And His 5 Worst Weaknesses)

Brad Ferguson is a Staff Writer with Comic Book Resources and a graduate from UCF. He loves pop culture in all forms but especially loves movies and video games. The properties he obsesses over most include Disney, Marvel, DC, Star Wars. Just Because he loves both Star Wars and Disney doesn’t mean he thinks they have been good for each other. Brad didn’t choose to be a writer, but writing chose him, and now CBR is where he calls home.

Flashpoint Batman Is Gonna Kill You in This Intimidating Cosplay
Marvel’s Darkhold Iron Man Is More Horrifying Than the Darkest What If
Supergirl: Nyxly and Kara’s Connection is Like Harry and Voldemort’s
Don’t Have a PS5? Register Now to Buy One Directly From Sony
Trans Hamilton Star Claims They Were Ousted Over Gender-Neutral Dressing Room Request