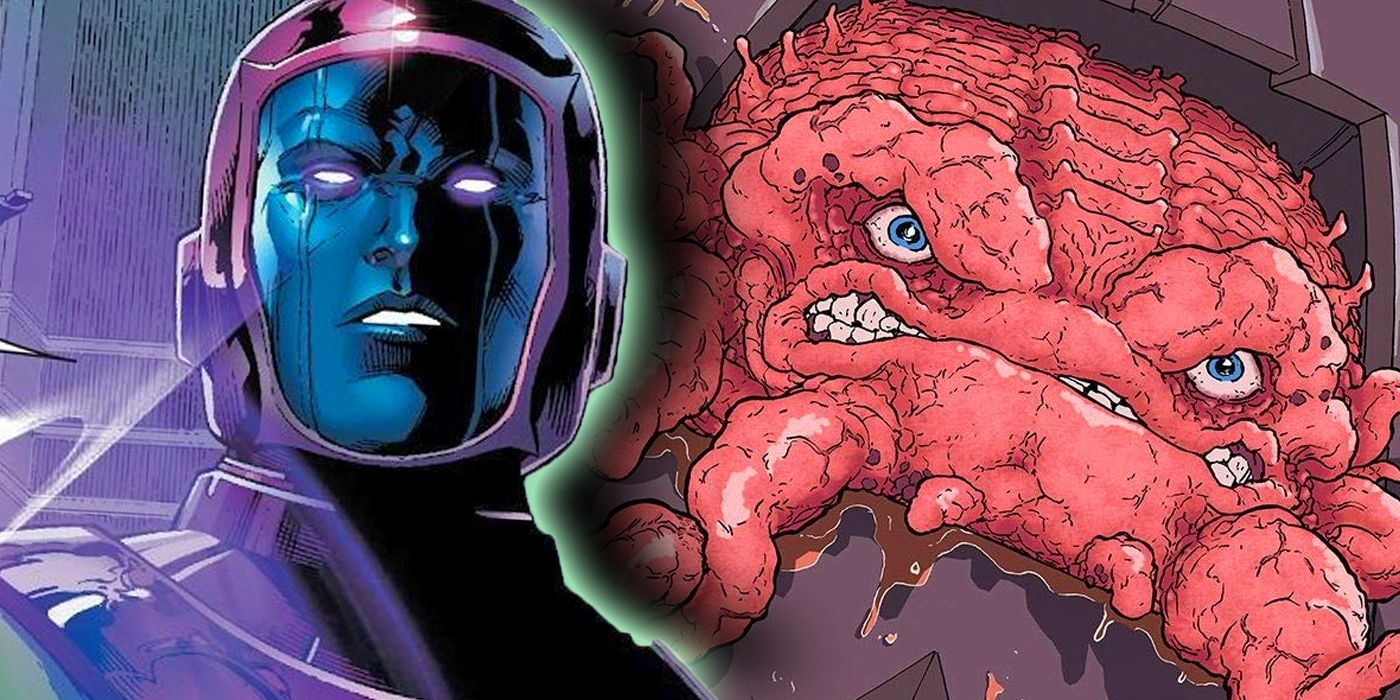 In the world of comics, two separate villains from two separate universes have claimed to be the greatest when it comes to conquest. Kang, Marvel Comic’s time-traveling conqueror has made this claim, as well as Krang, the Teenage Mutant Ninja Turtle’s dimension-hopping nemesis.

Both villains are threats not only to Earth, but multiple realities, timelines, and dimensions. While there’s certainly no  Kang and Krang to cross paths one day. As it’s highly unlikely that either would see the other as an ally, their meeting begs the question of which conqueror is the more dangerous threat.

Kang was born as Nathaniel Richards in the 31st century. Growing tired of the peace in his own time, Richards discovered the means to time travel and journeyed back to Earth’s distant past. From there he would become known as Kang the Conqueror, and his tenure as a time-traveling villain spawned many different variations of himself.

Krang is a warlord from an alternate plane of existence called Dimension X. He was captured and lost his original body, being reduced to nothing more than a brain. Krang was then banished to Earth along with his battle fortress, the Technodrome, and joined forces with the Teenage Mutant Ninja Turtle’s nemesis Shredder upon arriving on Earth.

Kang possesses a genius-level intellect that makes him a master scientist, engineer, physicist, and scholar. Additionally, traveling through time has granted him technology from far into the future. While he doesn’t possess any superpowers, his nearly limitless arsenal makes up for that. Kang’s suit grants him super-strength, concussive blasts equal to thousands of pounds of TNT, an anti-gravity projector, and the ability to peer into various timelines. His weapons include a vibration-ray projector, a molecular expander, an EMF amplifier, and nerve gas spray. He is also the leader of a robot army, the Growth-Man stimuloids. Kang’s primary plan is total domination of all time and space. He has fought both Earth’s greatest heroes and even various incarnations of himself for total control of all time.

Krang possesses a genius-level intellect as well, making him a master scientist and tactician. The technology that he possesses from Dimension-X enables him to create an array of powerful weaponry. Krang’s exo-suit is virtually indestructible and is capable of flight and producing a variety of weapons at command. Krang’s battle fortress, the Technodrome, has a trans-dimensional portal, missile launchers, four trident laser cannons, cloning devices, an earthquake machine, a Mouser factory, three-foot thick titanium plating, and countless drilling machines. Weapons that Krang has invented and used include a gravity altering device, the impervium generator, a weather maker, a matter transporter, a matter minimizer, and superpowered robot copies of his allies and villains. Krang’s initial plan was to conquer Dimension-X, but that extended towards Earth after he was banished. Krang would surely extend his sights past Earth and Dimension-X if he was ever successful.

So Who Is The Better Conqueror?

If the two villains met and battled one another it would surely escalate from a single battle into a full-blown war. Kang’s future technology would find a fair match against Krang’s extradimensional weaponry. Kang’s armies of Growth-Men would engage with Krang’s armies of Rock Men, Mousers, and Foot Clan soldiers. It would be a war of pure chaos full of fractured time lines and dimensional portals.

Ultimately, though, based on his superior track record as a conqueror and the caliber of enemies that he regularly battles, Kang would emerge the victor against Krang. While the Dimension X conqueror is a terrifying foe, Kang battles the likes of the Avengers whereas Krang fights four mutant ninja turtles, a news reporter, and a guy who fights with sports equipment. Kang’s ability to travel through time gives him the single most important edge over Krang. The Warlord of Dimension-X may be mighty, but Krang takes a back seat to the superior technology-inspired villainy of Kang the Conqueror.

Devon Foster is a comic feature writer for CBR and also a full-time nerd. An avid fan of comics and video games ever since he could remember, Devon has earned a Bachelor’s in English with a specialization in children’s literature from Rowan University. His favorite comics are Jim Starlin’s Warlock, Alan Moore’s Swamp Thing, and Chris Claremont’s entire run on X-Men. His favorite games are Castlevania: Symphony of the Night, Secret of Mana, and Illusion of Gaia.