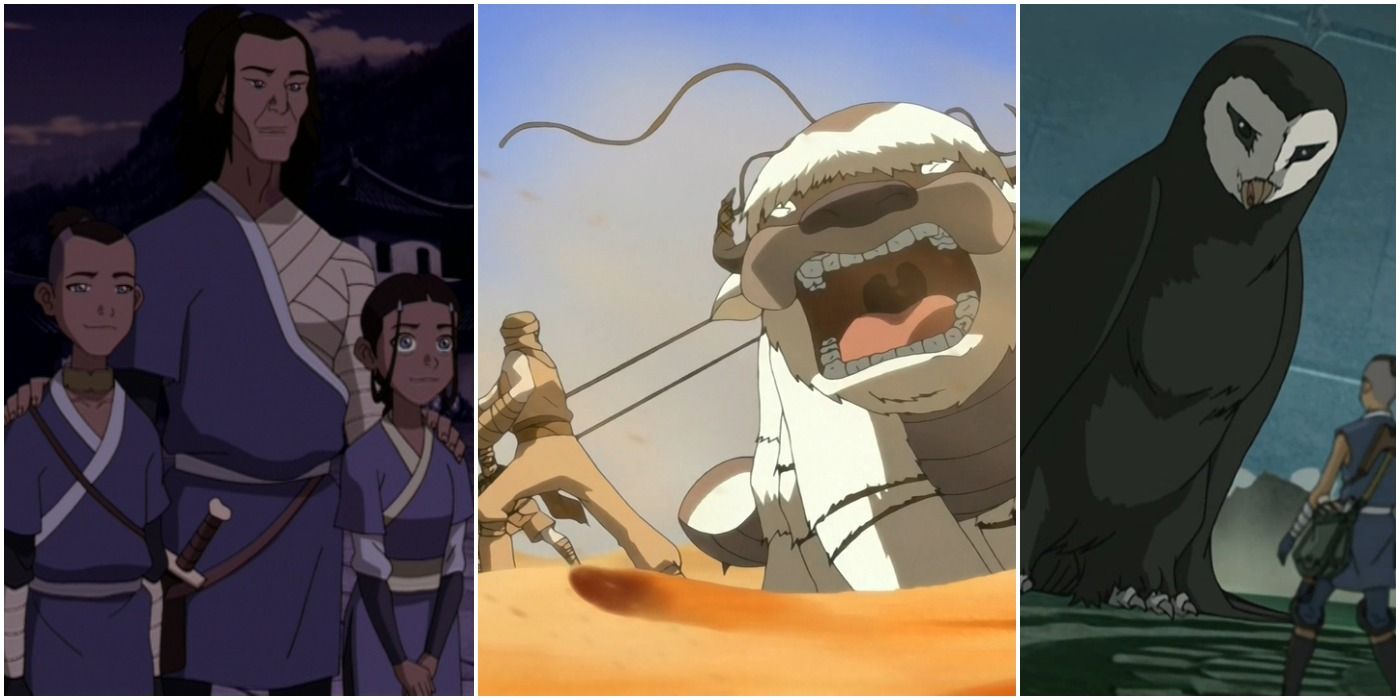 Aang is well-known for his pacifism, his reverence for life, and his tendency towards irresponsibility. When fans first met Aang, he had just emerged from an iceberg that was created as a result of him shirking his duties. They then got to know a character who prizes practical jokes and goofy shenanigans over training and hard work. It was hard to see how a character like Aang could ever defeat the Fire Lord in such a short time.

However, Aang grew and learned a lot on his journey. On it, there were a few defining moments where Aang acted out of character, whether that was for better or worse.

10 He Let Fame Get To Him On Kyoshi Island

As an Air Nomad, Aang was taught a certain level of detachment, and while he was still a mischievous kid who enjoyed the attention of his peers, his upbringing would have not placed importance on fame. Even when Aang first hears he is the Avatar, he is not excited at the possibility of fame. Instead, he is disheartened at the loss of personal freedoms.

However, when he gets attention on Kyoshi Island, he quickly allows it all to go to his head. Because of that, he stays on the island long enough for Prince Zuko to show up and burn down the village.

Forgiveness and detachment from emotions are part of Aang’s childhood teachings. However, it is really difficult for the carefree and anything-but-serious Avatar Aang to keep it together when he discovers what had happened to Monk Gyatso after he left the Air Temple. In his sadness, he enters the Avatar State and hurts Sokka and Katara, something that is completely out of character for a usual pacifist. However, Aang is not himself, and it is completely understandable for a child to react this way upon learning such heartwrenching news.

8 He Was Too Scared To Learn Firebending

Aang’s nonchalant attitude and inability to take things seriously results in him burning Katara when he does not heed Jeong Jeong’s advice about the order and importance of learning the other types of bending before fire. Because of this, Aang literally plays with fire and Katara gets burned.

For the rest of the series, Aang avoids learning firebending. While he is known to avoid responsibilities, such as running away from the Air Temple because he is scared and bring reluctant to earthbend because of how difficult it is to learn under Toph, this is the first time has such a hard time bouncing back because he is afraid for others.

7 He Believes Jet Over Sokka

When Katara, Sokka, and Aang first meet the late Jet, the leader of a rebel group comprised of kids called the Freedom Fighters, Sokka seemed to be the only one suspicious of Jet’s activities. Meanwhile, Katara and Aang were smitten with the charming Jet. Even after figuring out Jet’s plans to destroy the village, Aang and Katara refuse to believe him, and Sokka is left on his own to evacuate the civilians. Aang usually trusts his team wholeheartedly, so it is difficult to watch Aang blatantly disregard Sokka’s pleas.

6 He Lied And Stole From The Library

Even though Aang was new to the spirit world at the start of the series (fans saw this in painful detail when Aang struggled to figure out the situation with Heibai), he has a huge reverence for the spirits. However, this does not stop him from helping Sokka steal information from the library. Though Team Avatar does this for a good reason, to stop the Fire Nation’s tyranny, tricking the spirits is a serious deal that makes them no different than Zhao in the eyes of Wan Shi Tong.

5 He Was Jealous Of Bato And Kept Information Secret

When Katara and Sokka met up with a friend of the family, Bato, and attempted to learn about their father and the Water Tribe traditions they missed out on by leaving the South Pole to help Aang, Aang got jealous.

RELATED: Avatar: 5 Reasons Why Aang Was The Worst Character (& 5 He Was The Best)

This caused him to do something extremely out of character and keep important information away from Sokka and Katara. In the end, he had to come clean, and the siblings were understandably furious. Aang’s fear that Katara and Sokka will leave him became a self-fulfilling prophecy, as Aang’s actions led them to turn away from him.

4 He Had To Relinquish His Feelings To Talk To Koh

The usually emotive and expressive Aang was forced to act out of character to speak with Koh, the Facestealer. Though this is not a momentous change of pace for Aang, seeing as it was only meant as a quick ploy to gain important information, it was weird and stressful to watch Aang attempt to act devoid of emotion. He almost does not make it out with his face intact, but, luckily, Koh lets him go on a technicality, allowing Aang to return to his usual self.

3 He Lashed Out When Appa Was Stolen

The most memorable time Aang acted out of character had to be his reaction at finding the giant sky bison, Appa, stolen. Not only does he lash out at Toph, but he also lashes out at the thieves, the sandbenders, and destroys their transportation methods. Once again, he entered the Avatar State in a fit of rage and tried his best to avenge Appa and find where he was taken. In the end, Appa remained missing for many more episodes to come, and Aang is a husk of his former, happy-go-lucky self for a while.

Aang lost his ability to enter the Avatar State after being attacked by Azula and was almost killed under Ba Sing Se. This was a huge problem because, up until that moment, Aang had often relied on the power and fury of the Avatar State on many occasions. In fact, it was difficult for many to see how Aang would be able to defeat Fire Lord Ozai without that ability. So, he went to try and unlock the Avatar State with Guru Pathik. Unfortunately, Pathik told him he must let go of Katara, and in a moment unbecoming of his Air Nomad sensibilities, he refuses and runs away once again.

NEXT: 9 Times Korra Was Better Than Aang

Brooke Thomas lives and writes out of Houston, TX. She has an MA in English Literature and works as an Anime List Writer for CBR.com. When she is not watching anime, drawing her own comics, and writing, you can find her playing catch with her dog and rock climbing.