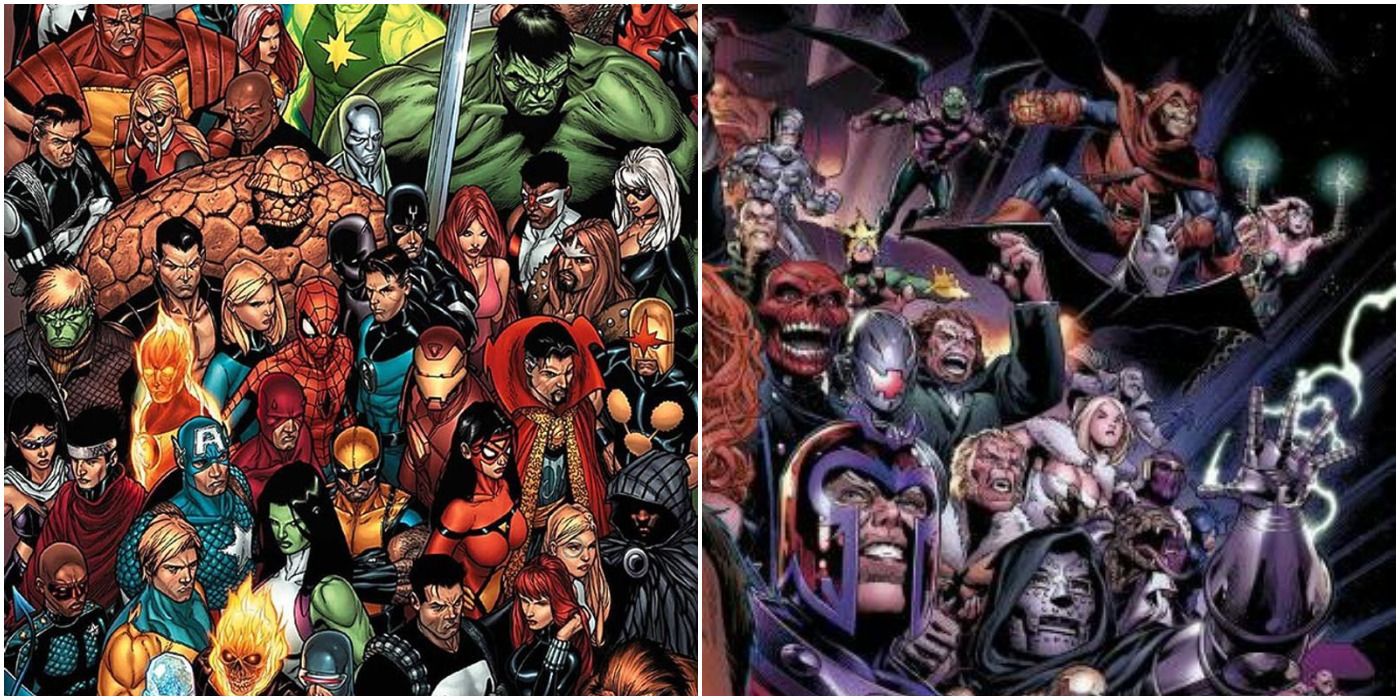 Hero and villain pairings are some of the most interesting relationships in comics. Seeing how the heroes interact with their villains has made for intriguing story choices over the years, especially at Marvel. The respected heroes of the Marvel Universe battle some truly intimidating villains and their interactions have always been interesting. While fans love to see heroes take on the villains of their rogues’ galleries, they also want to see their favorite heroes challenged in new ways.

RELATED: Marvel: 10 Villains Who Have Had To Fight A Version Of Themselves

The Avengers have faced down some of the most dangerous villains in the universe but there are some villains they just aren’t ready for and have never faced. One of these villains is the X-Men foe known as the Shadow King. Shadow King’s telepathic powers make him a match for even the powerful psionic talents of the X-Men, and that kind of power is something the Avengers don’t really have access to.

The Avengers have proven able to take on all kinds of foes, but the Shadow King would be a unique challenge for them. While Iron Man has telepathic protection built into his armor, the rest of the team is more vulnerable to psychic attack. It would be interesting to see how the Avengers would deal with him.

Thor is one of the most powerful Avengers, and he’s battled a remarkable cross section of villains from across the Marvel Universe, including Apocalypse. A villain he’s never faced is Mister Sinister. On the one hand, it makes sense since Sinister is all about the mutant genome and getting more genetic material. On the other hand, that’s the perfect reason for him to go after Thor.

Getting a hold of Thor’s DNA would be a boon to Mister Sinister’s experiments, so it’s bizarre that he’s never gone after the God of Thunder. Mister Sinister has gotten up to a lot of evil in his day and getting his hand on Thor DNA would compound that.

Wolverine is one of the most dangerous heroes in the Marvel Universe and he’s battled just about every foe around. He’s been an X-Man, an Avenger, a member of the Fantastic Four, a founder of Alpha Flight, and so much more. While he’s been to space, other dimensions, and alternate universes, one villain he hasn’t faced is the master of Annihilation Wave, Annihilus.

While Annihilus’s cosmic might and powerful horde of monsters vastly outclass Wolverine, Wolverine’s healing factor, adamantium skeleton, and amazing fighting skill would let him put up a better fight than seems possible and make for an exciting confrontation.

7 Storm And Whirlwind Would Have An Epic Tornado Fight

Whirlwind is one of those rare mutant villains that doesn’t fight the X-Men, instead battling the Avengers on his own and as a Master of Evil. As his name implies, Whirlwind has wind powers that allow him to fire off tornadoes and fly around. Because of the nature of his powers, it’s a bit strange that he’s never faced the X-Men’s resident weather manipulator, Storm.

Storm is one of the most powerful mutants on the planet and seeing her and Whirlwind tangle would be a lot of fun. Would Storm be able to control Whirlwind’s winds? Could he out-tornado her? If they ever got to fight each other, all of those questions could be answered.

Iron Man’s powerful armors have gotten him through all kinds of fights over the years, and he’s battled the worst of the worst, both on his own and with the Avengers. He’s even joined the Guardians of the Galaxy and helped them battle cosmic foes. But one he’s never faced is the most powerful herald of Galactus, Morg.

Morg proved to be more than a match for multiple heralds of Galactus, as he had found a way to boost the Power Cosmic to new levels. Morg certainly outguns Iron Man, but it would be interesting to see how the Armored Avenger would deal with Galactus’s most dangerous servant.

5 Beast And Kingpin Could Have A Great Fight

In the last few years, Beast has been the X-Man most likely to commit atrocities in the name of mutantkind. His intense new pragmatism has let him rise to the leader of X-Force and even though he’s been known to bungle the whole thing, he’s still tough and smart. He doesn’t get out in the field much anymore but if he did, a fight with Kingpin would be wild.

The two have never fought each other, mostly because their paths rarely crossed. But with both now in positions of greater power, it would be a great time to see these two strong, smart, and skilled men clash.

4 Shang-Chi And Sabretooth Would Be One For The Ages

The two would have an amazing fight. Shang-Chi has fallen to Wolverine a few times, and Sabretooth is just about as good a fighter and as skilled as Wolverine. While he doesn’t have the adamantium skeleton, he has the skill, brute strength, and experience to put up a good fight against the master of Kung-Fu.

Post-Avengers Vs. X-Men, Red Skull stole Professor X’s body and removed his brain, taking out the parts that made Xavier a powerful telepath and grafting them to his own brain. That was the only time the two have ever been around each other and it’s about time Xavier got some revenge. Returned to life, Xavier is a world leader and has working legs, meaning he can actually fight Red Skull.

It’s honestly a bit weird that the two have never faced each other. Red Skull is a massive racist who hates mutants, and Xavier’s entire schtick has been fighting against racists. They’ve never battled, but now would be a great time for it.

Psylocke is one of the X-Men’s more confusing members. Once a British woman named Elizabeth Braddock, Psylocke would trade bodies with a Hand assassin called Kwannon. Now both are back in their own bodies, with Braddock taking on her brother’s old mantle of Captain Britain and Kwannon becoming Psylocke. Psylocke is an amazing fighter, and one who could take on Bullseye if she had the chance.

Bullseye is one of the most dangerous hand to hand combatants on the planet, and seeing him go up against Psylocke would be great for readers, as her telepathic powers may give her an advantage against Bullseye.

1 Daredevil And Cyber Have Never Battled One Another

Daredevil does two things better than any hero: lying about his secret identity even when the other person knows it, and winning fights against people he shouldn’t be able to beat. He’s battled a who’s who of great fighters in the Marvel Universe, but he’s never faced Wolverine’s old rival, Cyber. Cyber’s telepathic powers, adamantium arms, strength, and skill would give Daredevil a great challenge.

Daredevil is an amazing martial artist, but Cyber has been fighting since WWI. He has the Devil of Hell’s Kitchen beat when it comes to experience, and that may be enough to allow him to defeat Daredevil.

NEXT: Marvel: Most Ridiculous OP Feats Of Strength By Villains


Next
10 Horrible Realities Of Being Wolverine

How the Inhumans Faded Into the Background After Their Failed MCU Show
Ted Lasso: Each Main Character’s Funniest Scene | CBR
Venom Urges Fans Against Spoiling Let There Be Carnage | CBR
HBO’s The Last of Us Debuts Its Joel and Ellie in First Official Photo
How Would Star Wars: Visions’ Lightsaber Umbrella Work? | CBR