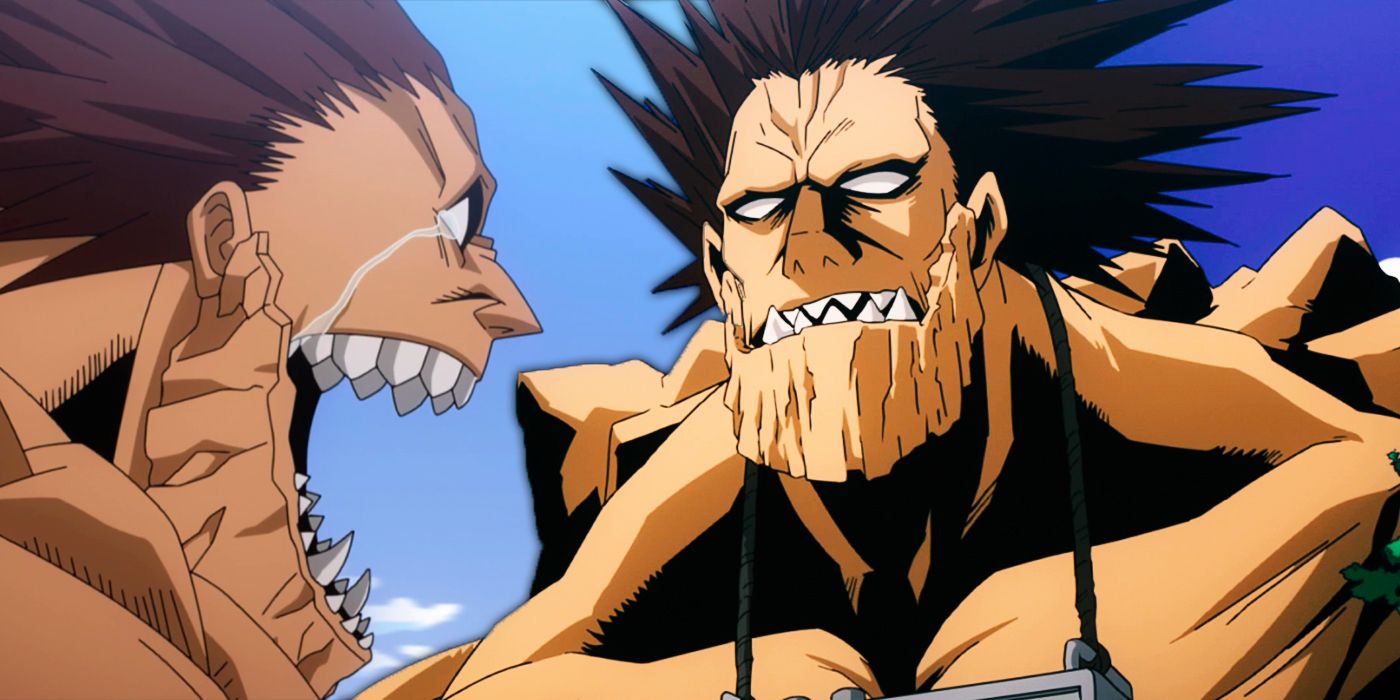 Gigantomachia has the potential to be My Hero Academia‘s most dangerous villain yet. One of All For One’s closest servants, the “walking natural disaster” enjoys a privilege very few other characters have: multiple Quirks. He hasn’t named them in the anime yet, but Machia’s combination of Quirks makes him impervious to most attacks and nigh impossible to capture. Here are all seven of Gigantomachia’s Quirks explained.

The first of Gigantomachia’s many Quirks works more like a passive ability than a power he can use on command. This Quirk allows him to transform his morale into raw power and stamina. Machia’s strength only increases the more excited he gets, making him the worst opponent to be up against in an endurance match. Endurance serves as the base for all the others, making Machia’s body tough enough to withstand several other powerful Quirks from All For One without any surgical modification, unlike the Nomu.

His most recognizable Quirk, Gigantification is another that works more like a passive ability. In the heat of a battle, Gigantomachia’s size increases. He can soar to impossible heights and will keep growing as long as he is excited, making him increasingly difficult to deal with.

Machia’s Dog Quirk boosts his physical senses to match his strength level. He has a heightened sense of both smell and hearing and can track down a scent he’s familiar with over untold distances. Using this Quirk in My Hero Academia, Machia was able to track Tomura Shigaraki down no matter where he hid.

This Quirk explains how Gigantomachia is able to maintain his consistent attack schedule on Shigaraki with very little rest. Energy Saver allows Machia to function on the barest amount of food and sleep. On just 3 hours of sleep, he can attack for 48 hours and 44 minutes without breaks, all the while growing in strength and size to match and surpass the level of the opponent he’s facing and repeat the whole process over and over again. His assault on Shigaraki under similar conditions is what is responsible for head of the League’s newfound strength. Energy Saver boosts Gigantomachia’s already impressive stamina to absurd levels.

This Quirk completely removed all sense of pain Gigantomachia had, allowing him to fight unencumbered by that distraction. Pain Blocker explains how he was able to withstand the heat of Dabi’s flames without any issue.

This Quirk allows Gigantomachia to alter his form to a more mole-like state. His claws elongate, along with the spines on his back, and he grows a visor across his eyes. These features prepare his body for the Quirk’s main ability, digging through the ground. Gigantomachia can burrow both below and above ground at unbelievable speeds, regardless of whatever obstacles are in his path. The destruction he leaves in his wake earned him his nickname of “walking natural disaster.”

Fierce Gains is Gigantomachia’s simplest Quirk but it works to complement every other ability he’s received. Activating this Quirk allows him to harden his muscles and entire body, much like Eijiro Kirishima. This invulnerability boost means his punches hit that much harder and allows him to crash through obstacles a lot easier.

Why Hasn’t He Shown Up Yet?

Gigantomachia’s combination of Quirks could allow him to go toe to toe with even All Might, yet he’s been largely absent from the series so far. The reason is actually a pretty simple one. All For One hid him away as a trump card for Shigaraki in case he ever got captured. The pre-emptive measure paid off since Machia is currently Shigaraki’s biggest asset, and the brute’s inability to accept Shigaraki’s weakness is the reason the villain leader is currently plus ultra.

Machia’s immense power is nerfed both by his low intelligence and devotion to All For One. Almost any other villain would revel in their great power and use it to further their own ends but Gigantomachia is exceedingly loyal to All For One. Machia is also not capable of overly complicated strategizing, preferring instead to take his Master’s word as law.

KEEP READING: My Hero Academia Reveals the True Meaning of One For All

Kelvin doesn’t do much except watch/read animanga. He’d love to talk about it too but people are scary so he writes about it here! When he’s not watching or writing about anime, he’s trying his darndest to bag that Political Science degree while navigating the novel idea of adulting AND keeping his sanity at the same time. (spoiler alert: that’s actually going pretty well!) You can find him on Twitter(though he’d rather you didn’t) @keIvin__k, where he talks about little else except all the untold wonder of Taylor Swift, My Hero Academia and Doja Cat.

He really hopes you’re having a good day.

Spawn’s Todd McFarlane Says the Reboot Won’t Rehash the Same Origin Story
Chapelwaite: A Shocking Death Changes Everything | CBR
Scarlet Witch: The Mystical Avenger Has Marvel’s Wildest Powers and History
Boruto: 7 Things Kurama Would Be Doing If He Were Still Alive
5 Famous Gaming Glitches You Can Still Do Today | CBR