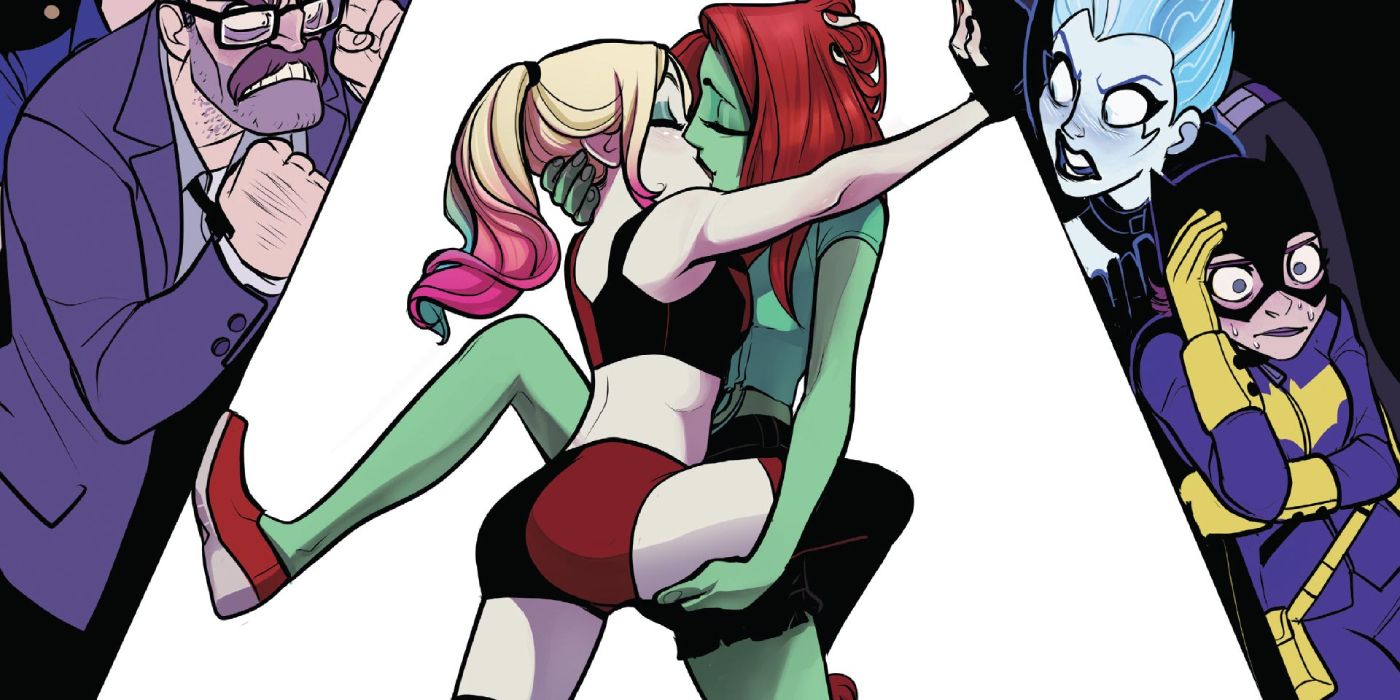 Harley Quinn made waves in 2019 as an adult-oriented cartoon from DC, featuring the Cupid of Crime. The catalyst of the cartoon is Harley ending her abusive relationship with the Joker and setting out to make a name for herself as Gotham’s next big bad. As Season 2 progressed, a new relationship began between her and Ivy. Harley Quinn‘s Season 2 ended with Ivy’s wedding to Kite-Man falling through and the almost-bride-to-be running away with Harley.

While fans of the show await Season 3, they can get a taste for what’s in store next in a comic building off of Harley Quinn Season 2, Harley Quinn: The Eat. Bang! Kill. Tour — available now both online and in print. During a press conference attended by CBR and other outlets, series writer Tee Franklin discussed how the comic deepens Harley and Ivy’s romance.

“On the show, you dip your toe in,” Franklin began. “It was just like, ‘Okay, they’re kissing.’ We’re not really seeing the sex scene, just a little dip of the toe. In the comics, we get to see a lot more — that I do hope we’ll get to see in Season 3. Their relationship is needed. It is important to talk about, and I’m really grateful to be the one to tell this love story. There’s a lot of will-they-won’t-they in the comics, and when they do, it’s not as beautifully shown. Having Harley and Ivy in bed naked together under the covers, or her doing a cartwheel onto the vagina — that is really cool! It’s fun to be able to tell this type of story in this medium that people can just hold on to forever versus a show you gotta keep on watching.”

Harley and Ivy’s relationship has been one of the most prominent queer romances in DC comics, whether it is in the main universe, as formerly seen in the New 52 run of Harley Quinn, or in one of the alternate universe tellings, like with DC Bombshells. The importance of this relationship was clear to Franklin, as was the significance of Franklin being the one to write it.

“We’re gonna explore a lot of queer love between the two ladies,” she said. “For one, I just hope y’all enjoy. I am blessed. This whole book, this whole series is freaking groundbreaking. I am the first black woman to write Harley Quinn. That in itself is just like holy shit, and then you add I’m queer, disabled. I’m a whole wheelchair user, and I’m autistic. That is really cool.”

“We all know representation matters,” Franklin continued. “But something like this, I’m truly grateful for the opportunity. For one, this is my first DC gig, and I’m writing Harley. It’s cool. I’m showing that autistic people are talented, and we can do so much. Disabled people, we’re not just here to inspire you. We are people with villains who deserve love, who are talented, and I’m hoping this ushers in a new generation of disabled comic writers and autistic comic writers because it’s needed. It’s really needed.”

How Franklin Addresses Harley Quinn’s Abusive Relationship with the Joker

Franklin noted that Harley is also a survivor of domestic abuse and addressed how this element of her past makes her relationship with Ivy that much more powerful. “When you go back to the animated series, the Harley and Joker dynamic is straight-up domestic violence, no matter what way you slice it,” she said. “I feel, personally, that seeing someone who finally decides to leave resonates so much with people. We go back. Unfortunately, I have gone back to a shitty DV [domestic violence] situation, and when you’re tired and done and enough is enough, you’re out… Until you’re in DV situation, and you finally see somebody getting out, it’s like, ‘Shit, maybe I have a chance.'”

Over the years, Harley’s past with the Joker, as well as the end of that relationship, has been explored in many different ways and media. While this has been explored multiple times, the impact of Harley moving on from the Joker and finding love again is empowering for many. “It could be other reasons, but I really feel like that is why Harley finally breaks free,” Franklin said. “To be with somebody who she loves, who she wants to spend the rest of her life with. Now there is happiness. There’s love after being put down, abused, ridiculed, assaulted.”

The Harley Quinn writer continued, “When you finally decide to break free, and you have that time where you need to figure out how you can move on with your life, how you can find a little bit of joy — because there’s no joy, it’s just darkness. In those moments, you’re like, ‘Shit, I should go back because this is what I’m used to.’ Being on your own after being with somebody who has… Because it’s not just physical. It’s mental, it’s emotional, and it’s financial… When you finally break free, and you’re sitting home alone in your room with your thoughts, those thoughts can get really shitty. You feel like you’re not worthy of love because that was beaten into you. You start to believe it. So when you see Harley, even though a fictional character, she’s been through every fucking thing, but now she is free of this person, and she finds love and happiness. That is something that is just… I’m fucking crying, but this is just really important.”

Beyond what Harley has gone through with the Joker, this comic also explores Ivy’s trauma and pain. “There’s tons of emotions and trauma that were already touched on in the animated series, but I wanted to delve deeper and turn it up a notch because both of these women have these traumatic experiences from men in their lives,” Franklin said. “Ivy’s dad, Harley’s parents, her man. Harley has been through a lot, as has Ivy, and even though Ivy really wasn’t [ready] to marry Kite-Man, my girl still got left at the altar. I’m sure she’s grateful, but she’s also dealing with the hurt of, ‘Damn, I hurt this guy who I really loved, and that’s on me. I need to fix that.’ She’s gonna go through a bunch of emotions to try to handle this.”

Harley Quinn: The Eat. Bang! Kill. Tour opens the door for a deeper exploration of Ivy, who is one of the main characters of Harley Quinn. “We definitely go deep,” Franklin said. “Ivy gets real with herself. Ivy needs to get real with herself, otherwise, who wants to stay miserable? Being miserable for a few days is good, but ultimately you need to pull yourself out of the hole, and the girl is depressed. She’s depressed, so it’s gonna take her a minute to find some light at the end of this tunnel. We are gonna go deep. I explore a lot of mental health issues in the series.”

The issues surrounding mental health and trauma do not end with Ivy and Harley. Many others in Gotham are coming to terms with their past and how that makes them who they are. Ivy, Harley, and even Gordon have all gone through a lot, whether that is the pain of an unhealthy relationship or the trauma of a cruel parent.

“We have this little throwaway line about her dad being a piece of shit, and Ivy’s father does have this history in the comics of what type of person he is,” she said. “That scene where you saw him berating a child is like, ‘God damn.’ This is a child. Ivy was seven, eight years old. Same thing with Harley. Finally being able to confront your demons per se, your trauma, is a theme that will be explored throughout this series, even with Gordon. The man’s got some issues… His wife treated him like shit. She’s out there sleeping; he’s got balls on his ass. The man is going through some shit. He’s going through it. So everybody is going through it. Everybody needs to break through. That’s the theme. It’s a breakthrough theme.”

DC Comics’ Harley Quinn: The Eat. Bang! Kill. Tour is written by Tee Franklin, with art by Max Sarin, colors by Marissa Louise, and lettering by Taylor Esposito. Its debut issue is available now in print and online.

Caitlin Sinclair Chappell is a writer turned editor at CBR. What started as a love for comics, film and television turned into a career after graduating with honors from Lewis & Clark College. Along with her work for CBR, she edits the in-development comic series Half-Dragon, and she read her short story, “The Kabbalist and the Golem,” at the 2021 National Queer Arts Festival. Beyond writing and editing, she was the Film School Director at River Way Ranch Camp and the Assistant Director on the play Famous. She can be contacted at caitlin.c@cbr.com, and her social is @comiccookbook.

PREVIEW: Cross to Bear #1 | CBR
How the Inhumans Faded Into the Background After Their Failed MCU Show
Dexter’s Michael C. Hall Reveals the Four Episodes to Rewatch Before New Blood
Lost Judgment: Where to Find All the Squirrel Graffiti | CBR
Supergirl: Azie Tesfai on Guardian & Uncomfortable Questions