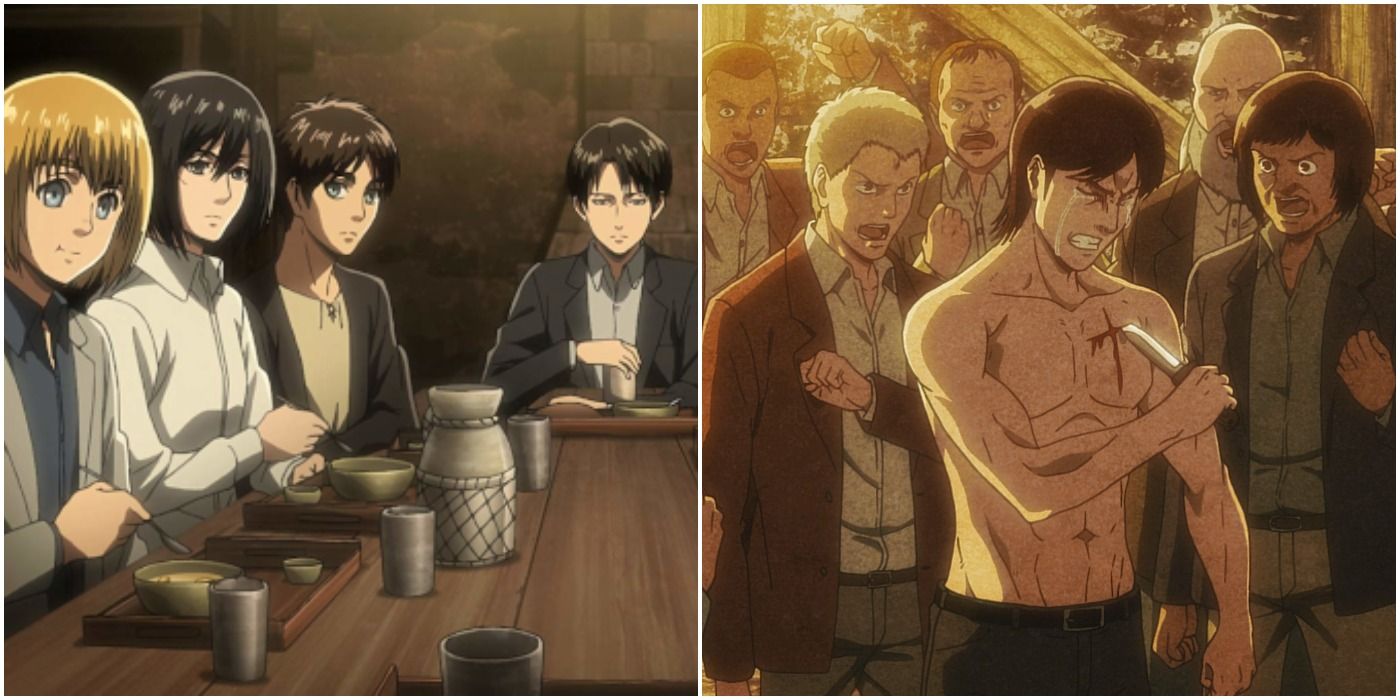 The Attack on Titan story is featured in two primary locations; Paradis and Marley. The former is where a majority of the narrative occurs, whereas the latter was discovered after the return to Grisha Yeager’s basement and the discovery of his findings.

RELATED: 10 Attack On Titan Characters That Would Make Great Among Us Imposters

Although Marley may seem more oppressive of its Eldian subjects, it isn’t necessarily less safe to live in. Through identifying the pros and cons of residing in both nations, we can better determine whether or not one is better inside or beyond the walls erected by King Fritz.

10 Marley: Being A Warrior Candidate Guarantees A Good Life For One’s Family

Although most of the Eldians lived in poverty, there was a way to ascend the limited social hierarchy of Marley. If one became a Warrior candidate, they would be guaranteed a better life for themselves and their families.

This wasn’t without a considerable amount of sacrifice, however. Not only were Warriors sent to the most dangerous battlefronts Marley was currently waging, they could only live a maximum of thirteen years. Moreover, their life is destined to end violently when being devoured by their successor.

The citizens of Paradis had significantly better living conditions than their Marleyan counterparts. They had much more freedom, treated each other equally, and had a more readily available supply of food (especially when Titan country was reclaimed shortly after Shiganshina).

Many citizens like Artur Braus even lived in prosperity, having regained the land they lost from the Warriors’ attack and then some. An overall higher quality of life entails better citizen longevity than the Eldians of Marley, especially when considering that they haven’t been taught to resent themselves.

8 Marley: The Marleyan Military Has Almost All Of The Titan Shifters & Is Better Protected From Threats

At the beginning of the series, Marley held almost all of the Titan Shifters, rendering them virtually unstoppable. Paradis only laid claim to the Founding and Attack Titans, which significantly limited how well they could defend themselves.

Although Armin’s acquisition of the Colossal Titan was a massive credit to his nation, it is almost useless in a defensive situation since the initial transformation causes a massive explosion. As a result, Marley is much better equipped to protect Eldians than Paradis is.

7 Paradis: Paradis Lived In Peace & Prosperity For A Century Before The First Sign Of Trouble

When considering whether or not Paradis is better to live in than Marley, it’s important to analyze its history. For over a hundred years, the Eldians behind the walls lived in peace and were completely safe from the Titans outside.

RELATED: 10 Proud Anime Heroes Who Had To Learn Humility The Hard Way

The dark era that resulted from the Warriors’ attack lasted roughly five years before the borders were reclaimed, the corrupt government was overthrown, and the famine was reverted. As a result, most of Paradis’ history provides idyllic and safe conditions for its citizens.

6 Marley: The Eldian Insurrection Provided The Possibility Of A Better Future

The Eldian insurrectionists provided an opportunity for those fed up by their oppressive conditions to break their chains and free themselves. Should Zeke have followed the plan to steal the Beast Titan and use it against his masters, there was a strong chance they could have succeeded.

If the Eldians inside Marley actually led a successful uprising, they would have been significantly better off than their brethren behind the walls. Not only did they have full context for the world’s true history, they also had better technology to protect themselves with.

5 Paradis: The Eldians Of Paradis Were Protected By The Wall Titans & Rumbling

In addition to serving as a strong countermeasure against potential invaders, there was a second utility behind the wall Titans which made it advisable to live in Paradis. They were used to conduct the Rumbling and exterminate eighty percent of all life outside of the island.

RELATED: 10 Times An Anime Villain Could Have Killed The Hero (But Chose Not To)

Considering that the Eldians born in Marley were not spared from this appalling statistic, they would have been much better off in Paradis. Eren’s superweapon also exacerbated the tension between the interned Eldians and their Marleyan oppressors.

4 Marley: Unlike Paradis, The Internment Zones Had Almost No Crime

Paradis has a sinister criminal underworld where only the strongest and most tenacious could survive. Levi was forced to grow up in these abysmal conditions under the watchful eye of Kenny Ackerman.

Although Marley may be oppressive, they keep to the standard of complete law and order within the internment zones. Since crime is swiftly addressed and dealt with, it almost never spreads to become a problem among the corralled Eldian people.

One of Marley’s worst problems is that it constantly warred with surrounding nations. This was demonstrated in the battle for Fort Slava, where the Titan Shifters’ military prowess was best exemplified.

As a result, the imprisoned Eldians must constantly live in fear of a potential invasion. Given how expendably their oppressors view them (having deigned to use child soldiers like Gabi and Falco), it’s not unreasonable to expect that they might be drafted at the first sign of a conflict with one of Marley’s many enemies.

Perhaps the greatest challenge facing the citizens of Paradis is the fear of pure Titans just beyond the walls. Possessing significantly greater strength than their humanoid counterparts and with the ability to regenerate endlessly, these monsters have proven too great a threat even for many Scouts.

Considering that the Eldians of Paradis knew virtually nothing about the giants, it was impossible for them to anticipate attacks and prepare accordingly. Consequently, they lived in a state of perpetual anxiety since the Survey Corps couldn’t always save them from danger.

1 Paradis: The Leaders Of Paradis Are Democratically Elected

The citizens of Paradis are much better at making their will known than those of Marley. They permitted Historia to take control after the fall of the previous monarchy only after she defeated the Reiss Titan personally.

Additionally, they made their voices heard through forming the Yeagerist party, a populist movement that put the interests of Paradis’ denizens at the forefront. Although their ideology was extremely dangerous, it illustrated that the will of the Eldians behind the walls mattered much more than their neighbors across the sea.

NEXT: Attack On Titan: 10 Times Reiner Was A Good Person


Next
One Piece: 10 Characters Who Didn’t Stick To The Plan

What If…? Boss Reveals the Captain America Episode Marvel Will Never Make
Which Game Making Tool Is Right for You? | CBR
Marvel Invites Fans to Darcy and Howard’s What If…? Wedding
Naruto: 10 Things That Make No Sense About The Uchiha Clan | CBR
Dragon Ball Super’s Ultra Ego Is Not What Makes Vegeta Vs. Granolah Great