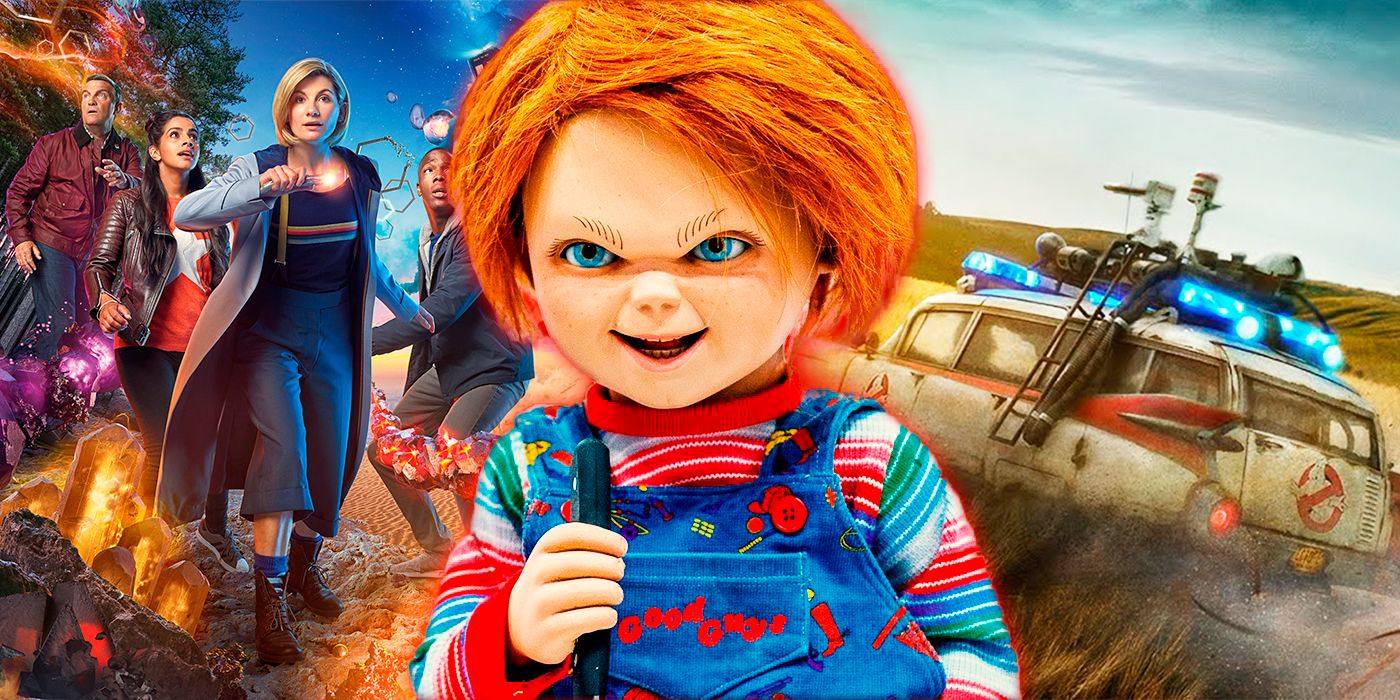 This past weekend was one of the biggest for pop culture aficionados everywhere as Comic-Con@Home 2021 pulled out all the stops to unveil all the biggest movies, TV shows and more in its annual entertainment industry celebration. From late summer television premieres to the next wave of major tentpole films, this past week’s wave of trailers was especially noteworthy, with a decided emphasis on horror as Halloween resurfaces on the horizon.

Here are all the biggest trailers, teasers and promos released this past week, closing out July 2021 with a decided bang.

RELATED: From Dune to My Hero Academia, Here Are This Week’s Best Trailers

While the new anthology series American Horror Stories provides fans with standalone stories that riff on the overarching American Horror Story mythos, the main series is poised to make its return this August in American Horror Story: Double Feature. Dividing the season’s narrative into two separate tales of mayhem and terror, a teaser trailer hints at two monstrous tales that may be more interconnected than initially believed.

After the smash success of Army of the Dead premiering on Netflix earlier this summer, the zombie heist film is getting a prequel in Army of Thieves. Matthias Schweighöfer, who also directs the prequel, reprises his role as Ludwig Dieter, an unassuming bank teller in a small town that finds himself recruited to embark on a string of daring heists across Europe.

After eight seasons and switching networks in the middle of its run, Brooklyn Nine-Nine is finally coming to an end this year. The latest trailer for the award-winning sitcom features the police detectives of Brooklyn’s finest police precinct prepare to say goodbye to one another before the usual hilarious hijinks ensue as Jake leads his friends for one last ride.

Adrien Brody stars as Captain Boone in the miniseries Chapelwaite, adapting the 1978 classic Stephen King short story “Jerusalem’s Lot.” After losing his wife at sea, Boone returns to his ancestral home of Preacher’s Corner, Maine as he wrestles with his grief and the responsibilities of being a single father. However, as Boone settles into his homestead, he learns something sinister might be lurking in the walls.

Franchise creator Don Mancini returns to the story of Child’s Play franchise in a new television series that continues the narrative from 2017’s Cult of Chucky, which Mancini wrote and directed. Simply titled Chucky, the latest trailer for the upcoming horror series proved that the eponymous killer doll’s transition to television will not skimp on the scares as Chucky lines up a new set of victims.

Day of the Dead

George A. Romero’s beloved 1985 zombie movie Day of the Dead serves as the inspiration behind the upcoming Syfy series of the same name. Following six strangers caught in the middle of a zombie apocalypse that sweeps across the globe, with everyone from a wedding to a small town immersed in the undead carnage.

Developed for television by Jed Elinoff and Scott Thomas, Day of the Dead premieres this October on Syfy.

RELATED: SurrealEstate’s Stars Play With the Skeletons in the Closet in Syfy’s Newest Series

Doctor Who fans were shocked this past week to learn that Series 13 will be the end of Jodie Whittaker’s tenure on the long-running British science fiction series, with the titular star departing alongside showrunner Chris Chibnall. The first trailer for Series 13 promises an epic end to the Thirteenth Doctor’s adventures, joined by several familiar faces for her cosmic odyssey.

Starring Jodie Whittaker, Doctor Who Series 13 will premiere on BBC in the United Kingdom and BBC America in the United States later this year.

Free! Iwatobi Swim Club, adapting Koji Oji’s light novel High Speed!, is about to end its run with the aptly titled Free! The Final Stroke. Being adapted as a two-part anime film, with the first installment set to premiere in Japan this September, a trailer shows the boys of the Iwatoi Swim Club preparing to compete in a global swimming tournament, with the stakes higher than ever.

Based on the light novel High Speed! by Koji Oji, Free! The Final Stroke is directed by Eisaku Kawanami. The first film in the two-part finale premieres Sept. 17 in Japan.

After having its theatrical release date pushed back for over a year, Ghostbusters: Afterlife is set to premiere this November, with a new trailer bringing in some classic characters as it revisits the world from the first two films. In addition to veteran Ghostbusters poised to return, the film also teases a major antagonist menacing the next generation of ghost hunters.

While production continues on the popular anime series Jujutsu Kaisen, the adaptation of Gege Akutami’s manga series is receiving a prequel film Jujutsu Kaisen 0. A troubled young man named Yuta Okkotsu is haunted by the ghost of Rika, a woman he was once in love with. And with Rika now a malevolent ghost that feeds on Yuta’s negative emotions, the world of Jujutsu Kaisen is about to witness one bad romance.

Based on the manga series by Gege Akutami, Jujutsu Kaisen 0 will premiere in Japan on Dec. 24.

After producing the acclaimed, Scandinavian-set Midsommar, film studio A24 is delivering another European horror movie in time for Halloween with Lamb. Starring Noomi Rapace, the film follows a childless couple raising sheep at their home in Iceland. When one of their sheep gives birth to a lamb that defies the laws of nature, their remote farm becomes home to a twisted nightmare.

After taking a hiatus for several weeks, Legends of Tomorrow returns next month to close out its sixth season with a wedding. As Sara Lance and Ava Sharpe prepare to finally tie the knot, their nuptials are interrupted by extraterrestrial wedding crashers. And beyond the marital shenanigans, John Constantine continues to struggle with his dark side as the cost of dabbling on the occult begins to take a toll.

Legends of Tomorrow returns Aug. 8 on The CW.

RELATED: Legends of Tomorrow S6 Finale Is ‘Bigger Than the Crossover’

As Lucifer prepares to close out its enormously popular run on Netflix with its upcoming sixth season, the latest teaser trailer takes audiences on a walk down memory lane, revisiting fan-favorite moments from the previous five seasons. Ending out with a brief sneak peek at Season 6 in the teaser’s final scene, Lucifer sheepishly proclaims that he is preparing to leave Los Angeles for good.

Grief has always been ripe for horror movies to explore and this August’s The Night House leans hard into the narrative possibilities from this emotional inspiration. As a woman mourns the death of her husband, she learns that he possessed supernatural secrets, with some lurking in their home that may not have gone to the grave with him.

No Time to Die

After a string of delayed theatrical releases ever since it was first announced, No Time to Die is finally set to premiere in theaters this October, closing out Daniel Craig’s celebrated tenure as James Bond. As 007 faces off against a new villain in Safin, the latest promo heralding the franchise’s return pits Bond in one dazzling action set piece after another all over the world.

Starring Daniel Craig and directed by Cary Fukunaga, No Time to Die arrives in theaters on Oct. 8.

One of the most ambitious original series on Apple TV+ is See, set in a sci-fi world where humanity has endured widespread blindness following a contagion that wiped out the vast majority of the population. A new trailer for Season 2 introduces Edo Voss, the estranged older brother of protagonist Baba Voss, and the two siblings are less than thrilled to be reunited as Season 2 begins.

Shang-Chi and the Legend of the Ten Rings

The Marvel Cinematic Universe’s return to the big screen continues with Shang-Chi and the Legend of the Ten Rings, set to premiere in theaters this September. The latest trailer for the film has the eponymous martial arts superhero enter a martial arts tournament before going on to confront his villainous father the Mandarin as the destructive powers of the ten rings are showcased in full.

Stargirl returns for its second season this August, as teenage superhero Courtney Whitmore continues to forge a new legacy for the Justice Society of America while combatting supervillains like the aptly named Injustice Society. As Courtney meets the fellow teen hero Jade, she also must contend with the sinister Shade who has set his sights on the fledgling heroes.

After going on a lengthy midseason hiatus that began this past May, Supergirl‘s sixth and final season is set to return this August and close out its last run of episodes. As Kara recovers from her trip to the Phantom Zone, she finds that she is not the only one that was trapped in the pocket dimension to make an escape.

Supergirl returns Aug. 24 on The CW.