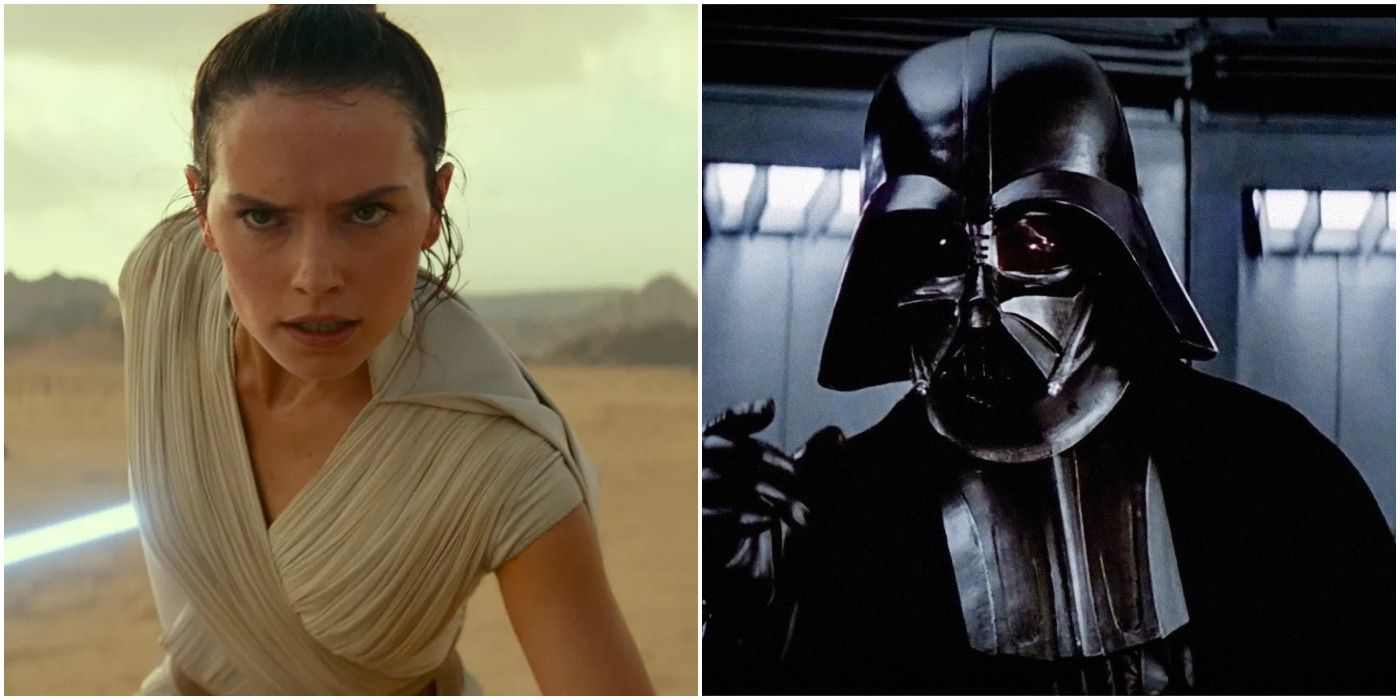 Star Wars is known for its great heroes, and Rey Skywalker has taken her place among them. As the premiere Jedi of the Sequel Trilogy, Rey helped defeat the First Order and end Palpatine’s menace, as well as showing Luke Skywalker how to be a hero again. Besides being an inspiring hero, she was also a shrewd combatant, able to defeat everything thrown at her.

However, Star Wars is also known for its villains, and as good as Rey is, there are plenty of villains who she should be able to beat but would actually have no chance against. She’s good, but these villains are better.

10 Rey Should Be Able To Beat: Mother Talzin Wasn’t Much Of A Physical Combatant

Star Wars: The Clone Wars introduced a lot of great characters. Mother Talzin was the leader of the Nightsisters of Dathomir and she was powerful in the Force. The Nightsisters channeled the Force by using spellcraft and were able to do things with it that even Jedi couldn’t. However, as far as it went, a well-trained Jedi would be able to take down a Nightsister in a fight.

Talzin wasn’t exactly much of a hand-to-hand fighter. She was able to hold her own against Mace Windu for a short time but quickly escaped. While Rey’s skill isn’t as polished as Old Republic Jedi, she should be able to overwhelm Talzin with her physical attacks.

9 Why Rey Couldn’t Win: Her Force Powers Are Limited

Rey is powerful in the Force but her skills aren’t exactly the best. The most impressive thing she has ever been able to do was using Force lightning to destroy a ship and even that was reflexive and accidental. Snoke was able to completely overwhelm her and she only beat Palpatine with the help of Kylo Ren.

Talzin’s power with the Force may not match Rey’s but she’s massively more skilled than the young Jedi. Rey’s never faced anyone that could use the Force like Talzin could and that would make all the difference. Talzin would take advantage of Rey’s impetuousness and use her Force spells to destroy her.

8 Rey Should Be Able To Beat: Count Dooku Has A Tendency To Lose To Chosen Ones

Count Dooku was one of the most intelligent villains of his day, leading the Separatist war effort and working with Palpatine to undermine the powers of the galaxy to destroy the Jedi and bring the Sith to ascendancy. A former Jedi and expert swordsman, he was a dangerous foe for any Jedi, but that doesn’t mean he could’ve beat Rey.

Rey’s lack of any kind of lightsaber style should infuriate the master swordsman, making it hard for him to predict her movements. This should allow her to win.

Rey was able to triumph over a lot of foes through sheer pluckiness and a good mixture of luck and sheer Force power. That won’t help her against Dooku. Dooku may not be as powerful as her but he’s vastly superior with his lightsaber and knows more about the Force than her. Her graceless lightsaber style may give him some trouble at first but he’d quickly adapt and overcome her.

Dooku would be able to play mind games with the young Jedi and get her to make mistakes, using his prodigious Force skills and lightsaber prowess to get an advantage over her and keep it.

6 Rey Should Be Able To Beat: General Grievous Has Lost A Lot

General Grievous was the leader of the Separatist armed forces and while he had a fearsome reputation, he actually lost. A lot. While he was well trained and his cyborg body gave him massive strengths, he didn’t have the Force on his side, which gave the Jedi he battled an advantage.

Rey was able to triumph over many foes who were more skilled than her and that should give her a chance to defeat Grievous. His lack of Force power gives her an advantage and while he’s definitely stronger and more skilled than her, she should be able to take the win and join the legion of Jedi who have beaten the cybernetic menace.

5 Why Rey Couldn’t Win: He Actually Has Combat Training & His Extra Arms Are More Than She Can Deal With

Rey was able to do a lot with little, but Grievous is just way too skilled for her. His inhuman strength, speed, and reflexes would even up the odds against her Force powers and his sheer skill advantage would give Grievous a way to defeat Rey. It wouldn’t be easy, but once he started busting out with the extra lightsabers, she’d be in a lot of trouble.

Rey has never faced anyone like Grievous before, especially with his ability to simultaneously use four lightsabers at once. She’s a good fighter but she’s not that good—she’s nowhere near as skilled as an Old Republic Jedi. That would spell her doom against Grievous.

4 Rey Should Be Able To Beat: Darth Maul Always Loses In The End

Darth Maul has always been one of the most intimidating villains in Star Wars but his first appearance gave him a pretty big L. Many fans were surprised to find him back but Maul proved to be a survivor. Unfortunately for him, he’d need to use that skill over and over again. Every time he won, he’d lose again until he finally lost his life against his old nemesis Obi-Wan, dying in the Jedi’s arms.

Much like Maul, Rey was also always able to overcome the odds and her light side powers and ferocity in combat should allow her to surprise Maul long enough to take him out.

3 Why Rey Couldn’t Win: Maul Is Way More Skilled Than Rey Can Imagine

Rey has really only ever fought one person with a lightsaber: Kylo Ren. Ren was good but Rey was able to beat him every time they fought. However, he wasn’t even fully trained and even he would have had a massive problem fighting Maul. Even in his older age, Maul was still way more skilled than anyone Rey faced and that would be the end for her.

Maul would just be too much for Rey. He’s much better with a lightsaber, has more practical experience with the Force, and knows how to use psychological warfare against his foes. As an actual Sith, trained by Palpatine, he would be too much for Rey.

2 Rey Should Be Able To Beat: Darth Vader Isn’t Who He Used To Be

Darth Vader is the most fearsome villain in Star Wars. He isn’t the most powerful but his black, armor-clad visage struck fear into nearly everyone he came across and there are few beings who had earned his respect. Vader’s body count was high but he also was nowhere near the man he could have been. This is why Rey has a chance against him.

Anakin Skywalker was a Chosen One and so seemingly is Rey. However, Vader’s power ossified over the years and his cybernetic limbs and years of injuries changed the way he fought. Rey should be able to take advantage of his weaknesses and get the win.

1 Why Rey Couldn’t Win: Vader Is The Total Package

Rey should be able to beat Vader, but should and could are two very different things when fighting Vader. To begin with, Vader is just a way better fighter than her. Not only is he stronger but he can enhance that with the Force. He has decades of experience and even though Rey’s brute power has seen her through every fight, Vader has the power and the skill, something Rey lacks in comparison.

Rey just couldn’t match up to Vader. Her power may be greater but she doesn’t have the training, in the Force or with a lightsaber, to be able to stand up to Vader. She’d try but it’s doubtful she’d last long against the Force and lightsaber onslaught of Darth Vader.

NEXT: Star Wars: 10 Things Luke Skywalker Can Do Without His Lightsaber