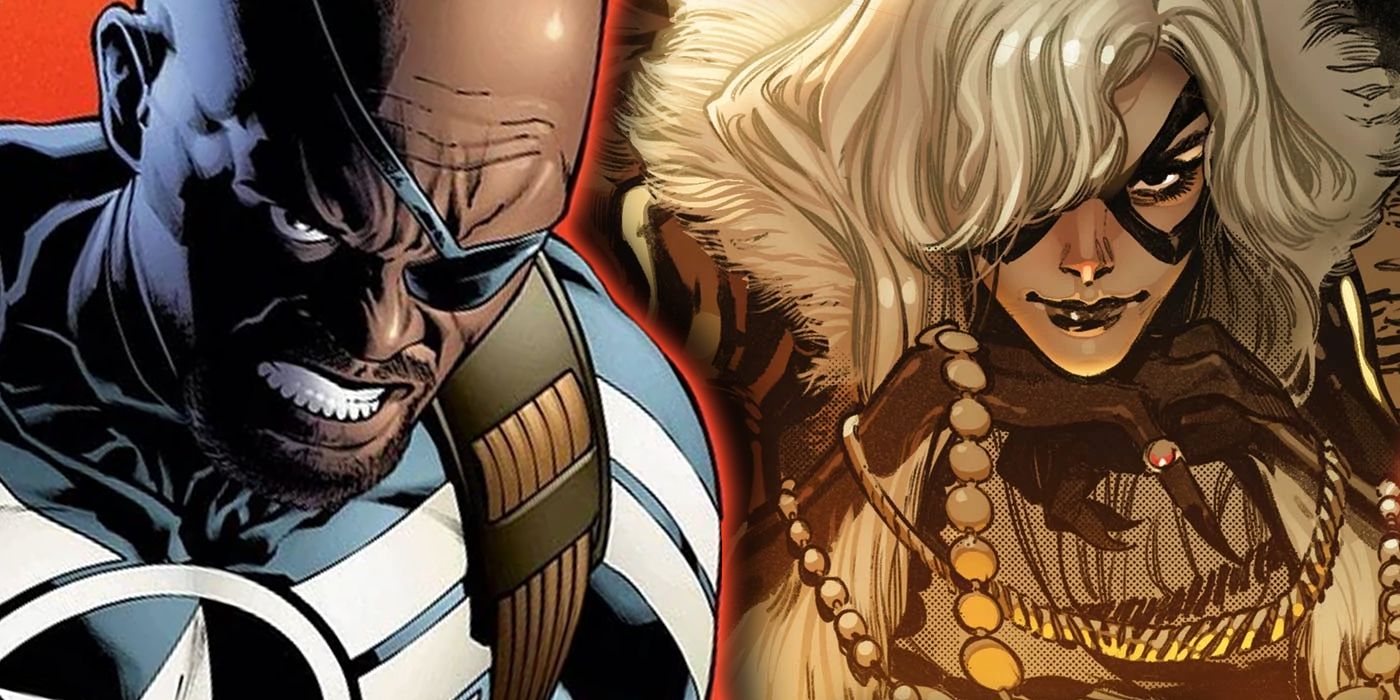 Felicia Hardy has unquestionably been one of the greatest thieves in the Marvel Universe since she burst on the scene over four decades ago. Over the years, that unique set of skills has never gone unappreciated. Far from her usual quarry, Felicia’s most recent quest has seen her hunting down Infinity Stones themselves, and in the process, she has drawn some particularly high profile attention. As imposing as he might be, Black Cat has no problem handling Nick Fury, and she has just given him a stark reminder of just how far he has to go as a superspy.

Felicia’s hunt for the Infinity Stones has been arduous even for such an accomplished thief, though she has just gotten what might prove to be her first big break. With her partners in crime Bruno and Doctor Korpse at the ready, Felicia lines part of her target’s roof with explosives before blasting her way inside to the array of the well-guarded shipping containers below. Despite the relatively heavy security measures, Black Cat knows exactly what she is doing, and before long the alarms are disabled and she is well on her way towards claiming her prize. When the hazardous waste labels and shotgun boobytrap don’t stop her, it’s hard to imagine why the appearance of Nick Fury would, though that doesn’t stop the former S.H.I.E.L.D. agent from trying. Now that he is standing between Black Cat and the exit, there is nowhere left for her to run. Of course, running was never Felicia’s intention as is made clear in Black Cat #8 by Jed MacKay, C.F. Villa, Brian Reber and Ferran Delgado when the container she is in is lifted into the air courtesy of Bruno piloting their getaway helicopter.

Fury manages to catch up to the shipping container as it flies away, grabbing onto the open doorframe and hoisting himself inside to fire off a volley of shots at Black Cat with a hidden pistol. It’s a neat trick, but hardly one that catches Black Cat off guard. In fact, it only draws mild taunts Fury’s way, though he is far less concerned with the banter than he is getting Black Cat’s stolen cargo back to safety. Unfortunately, Fury proves to be less agile than his opponent, and the one shot he actually connects with isn’t enough to keep her from throwing him down to the waters below. Despite Nick Fury Jr.’s vast proficiency in the field, he is still relatively new to these kinds of high-flying antics. Especially considering he only took after his father’s superspy lifestyle in 2012’s Battle Scars #5 by Chris Yost, Cullen Bunn, Matt Fraction, and Scot Eaton, this particular Fury has a long way to go before he will be any number of steps ahead of Felicia Hardy.

RELATED: Black Cat Gets a Surprise New Crew for Her Infinity Stone Hunt

It shouldn’t come as so much of a surprise that Nick Fury was beaten at his own game by Black Cat. No matter how dedicated he might be to staying ahead of whatever is really behind the Infinity Stones’ reemergence on Earth, that only goes so far when so much of the situation is almost entirely outside of his control. In that regard, Felicia has had plenty of time to learn how to follow the action rather than trying to manage it. Wherever this story takes them next, this most recent defeat will at least serve as a reminder to Nick Fury of precisely who it is he’s dealing with.