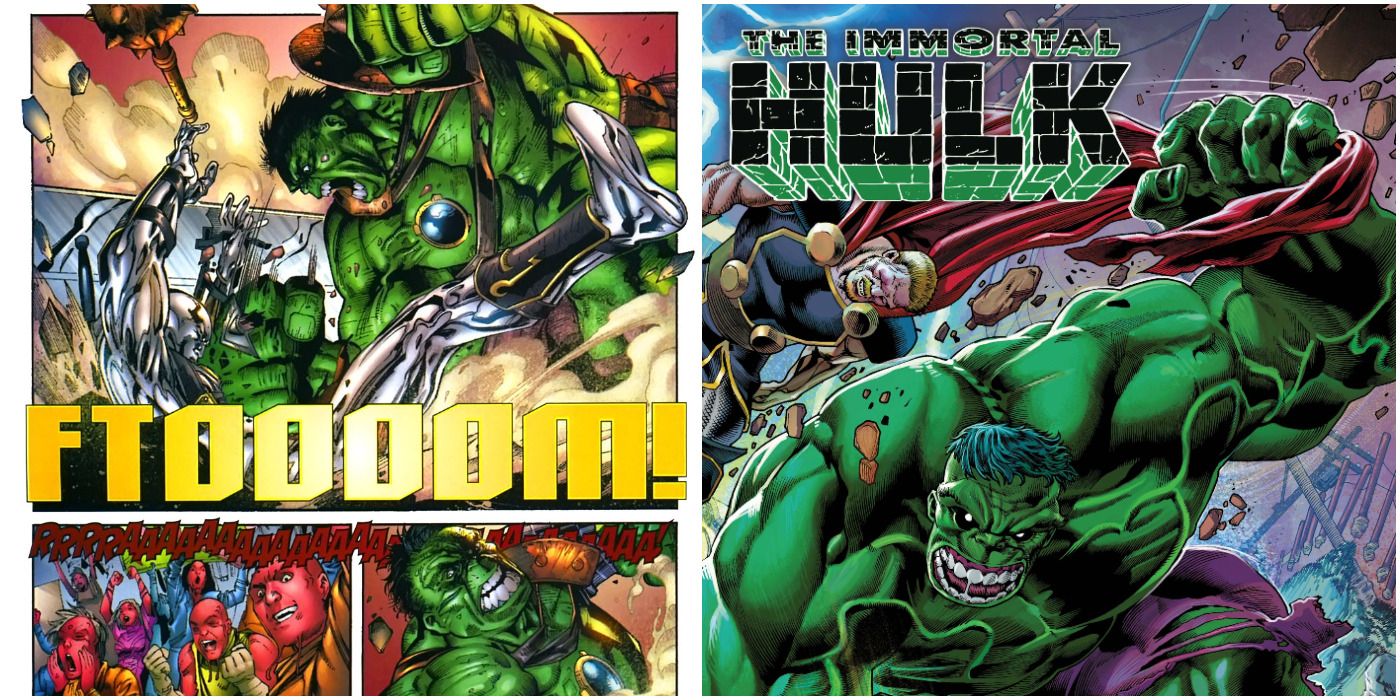 The resident monster of the Marvel Universe, the Hulk is a founding Avenger and one of the most powerful beings on Earth. While calling him a superhero is not entirely accurate, he’s helped in the battle against evil in his own way, in between destructive rampages, that is. There are some great Hulk stories out there and he has a legion of fans.

RELATED: Hulk: The 10 Best Versions To Have In A Fight

10 His Lost His Chance At Revenge In Avengers: Endgame

Avengers: Endgame is pretty much universally loved but there are some things about the movie that fans don’t like. Hulk fans were especially annoyed by the movie because their favorite character never was able to get his revenge against Thanos. After his beating in Avengers: Infinity War, Hulk fans were hoping he’d come back and get some attacks in on the Mad Titan but that didn’t happen.

Instead, he becomes a stereotypical funny MCU character and while he had an important role in the movie, the fact that he didn’t get to participate at all in the movie’s end battle bothered Hulk fans to no end.

9 He Doesn’t Really Have Any Good Villains Anymore

The Hulk is just barely a superhero but he still has villains and, on the whole, they’re mostly rather dull. Sure, there are some gems, like the Abomination, Thunderbolt Ross, and the Leader, but the rest of them aren’t nearly as impressive. In fact, even Hulk fans would have a hard time naming any others besides those three that are considered standout villains.

Most of them are just monsters for him to punch or just shallow rehashes of Thunderbolt Ross. In fact, the most interesting people he usually fights are his fellow heroes, which is never a good sign for a character.

The Hulk has evolved a lot over the years and there are multiple versions of the character– smart ones, dull ones, immortal ones, evil future despots, and world breakers. Going back through the Hulk’s history is a travelogue through a character that has gone through massive changes over the years and it can be kind of frustrating for fans. Especially when they have a favorite version that doesn’t get used anymore.

RELATED: Hulk: The 5 Best Costumes The Character Has Worn (& 5 That Sucked)

This can be a massive problem for Hulk fans- some people like more savage versions of the character, some like Professor Hulk, and some like the Maestro. The character is always in flux as new creators always like to put a new spin on him. But not all of these spins have panned out.

7 However, All The Different Hulks Water Down The Concept

While there are many versions of the Hulk, there are also plenty of other Hulks, a whole family of them, in fact. Starting with the She-Hulk, there have been all kinds of Hulks over the years- Red Hulk, Yellow Hulk, Red She-Hulk, Skaar, and so many others. Now, it’s not weird for there to be multiple versions of the same character- there are two Wolverines and Spider-Men, but with the Hulk it is strange.

For one thing, gamma radiation affects different people in different ways, so to have so many who are all essentially like him is just plain strange. It also makes the character less special, as there are so many extremely similar versions of him running around.

Sometimes, there are unique Hulk stories, like the Grey Hulk times or Planet Hulk, but even that led to him fighting the heroes again. That’s not to say some of these stories aren’t great regardless but there’s really only so much that can be done with him.

5 In A Superhero Universe, He Wouldn’t Be That Much Of A Threat

The Hulk is a great monster but in a world full of super-intelligent and powerful heroes, he wouldn’t be that much of a threat. Sure, his strength potential is infinite and he’d tear apart any military forces that came at him but someone like Reed Richards would easily figure out a way to drain his gamma energy away and keep him from becoming the Hulk again.

Too many Hulk stories stretch credulity because there’s no way one of the many super-intelligent friends Bruce Banner has wouldn’t have been able to get rid of the Hulk. Honestly, Banner himself should be able to by now. It’s an inconsistency at the core of the character that breaks most of his stories.

On his own, the Hulk isn’t exactly an exciting character to read about. Bruce Banner is an interesting character but without a supporting cast to play off him and the Hulk, the stories just don’t work as well. During the Peter David run of the character (widely considered to contain some of the best Hulk stories of all time) he had a great supporting cast- Betty Ross, Rick Jones, and Rick’s girlfriend Marlo.

RELATED: 10 Incredible Ways The Hulk Has Been Killed In The Comics

In recent years, he’s pretty much operated without his classic supporting cast and it’s a disappointment to long-time fans who enjoyed those characters.

The Hulk doesn’t really hang out with the heroes very much but he often gets brought into the big stories. For example, they made a big deal of bringing him into Avengers Vs X-Men, but he barely did anything in the battle against Dark Phoenix Cyclops. He was in Infinity Gauntlet and was one of the few Earth heroes Thanos didn’t kill- but he didn’t exactly do anything spectacular.

Marvel gets his fans’ hopes up about him doing something impressive in the next big event book and yet it never shakes out. Even when he does get some good licks in, like in Onslaught: Marvel Universe, it doesn’t matter that much in the long run.

2 He’s Getting Too Overpowered

One of the most frustrating things about the Hulk is that he’s just way too overpowered. This is a being who basically has infinite strength and one of the greatest healing factors in comics; he has regularly beat down heroes like Thor and can take on all of the Avengers without sweating. There’s only so much that can be done with him.

It’s gotten to the point that when he does get beat, it almost feels out of character for him. It’s also hard to find any credible threats for him and his stories often lack any kind of dramatic stakes because the Hulk is almost impossible to defeat.

1 The Immortal Hulk Is Ending

Writer Al Ewing and artist Joe Bennet’s The Immortal Hulk is one of the greatest Hulk books ever. The general consensus is that it’s one of the best Marvel books being published and it’s the best the Hulk has been in a very long time. However, it’s about to end and fans of the book are already starting to miss it.

It was one of the most inventive takes on the Hulk in a very long time, flipping the script and breaking the formula of the character. Ewing and Bennet’s book has changed the Hulk forever and fans have loved the ride. While all good things must come to an end, that doesn’t mean that fans have to be happy about it.

NEXT: Marvel: The Hulk & 9 Other Characters Who Would Be Great In Horror Comics