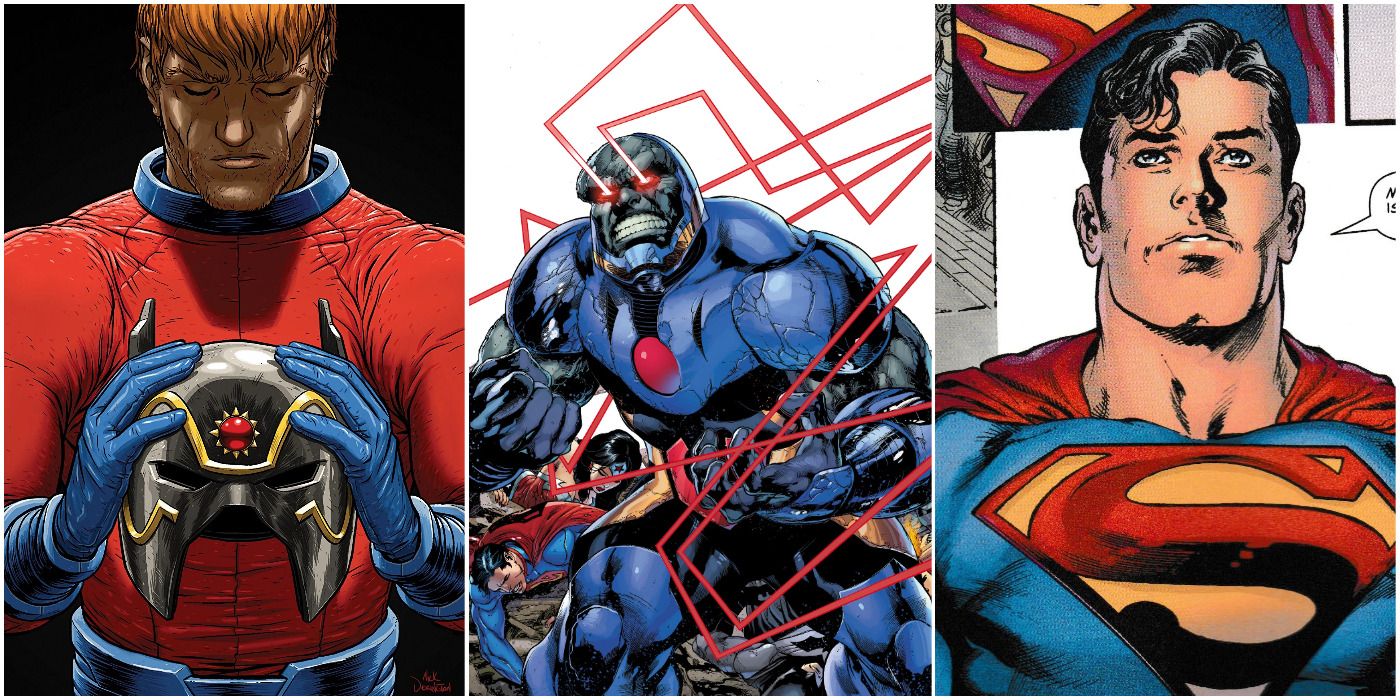 There are very few ways to describe the greatest villain of the Fourth World. In fact, he’s DC‘s greatest villain in general. As the God of Evil, Darkseid’s threat is absolute; unlike many villains, Darkseid has won against the heroes, almost destroying the entire Multiverse in his death throes. Even at his weakest, Darkseid’s threat is still grave enough to almost doom reality.

RELATED: Avengers: 5 Reasons The Team Can Beat Darkseid (& 5 Why They Can’t)

However, that doesn’t mean he’s unbeatable. Darkseid has always ultimately been defeated. In fact, there are some heroes and villains who Darkseid has never actually beat, try as he might. Darkseid can be tough, but he’s not the toughest.

10 Anti-Monitor Was Able To Resist Darkseid

In the original Crisis On Infinite Earths, Darkseid and the Anti-Monitor never faced each other, although Darkseid did lend his power to the heroes. In the New 52, the two would face off and while the Anti-Monitor wasn’t responsible for Darkseid’s defeat- that was his daughter Grail- Darkseid didn’t beat him either.

As powerful as Darkseid is, the Anti-Monitor outdoes him in some places, which was enough for Anti-Monitor to keep Darkseid from defeating him. While it wasn’t a victory, Darkseid wasn’t able to win either.

Darkseid and Perpetua never actually faced off but there’s little doubt that the battle wouldn’t have gone well for Darkseid. Darkseid is the God of Evil and one of the most powerful villains around but Perpetua far outclasses him. Perpetua was one of the beings responsible for the creation of the Multiverse; Darkseid just can’t match that.

Darkseid would certainly try to defeat her because that’s just the kind of guy he is, but he would fail. Her powers are just so far beyond his that it’s even hard to see him phasing her even too much.

Mister Miracle is more known for his escapes than anything else but that doesn’t mean he isn’t a formidable fighter. Surviving Granny Goodness’s orphanage made him able to survive anything and he’s put those skills to good use over the years, defeating every foe in his way alongside his wife Big Barda. He hasn’t often fought against Darkseid, but when he does, he wins.

As Highfather’s son, Mister Miracle is very powerful and he’s as smart as they come. He always comes at Darkseid from angles that he’s not expecting and defeats him, bringing down the Lord of Apokolips with his ingenuity and unpredictability.

7 Wonder Woman And Darkseid Don’t Fight Often, But She’s Won When They Do

Wonder Woman and Darkseid have fought each other mostly while she was with the Justice League but they have faced off against each other on their own on occasion. While Darkseid vastly overpowers Wonder Woman, she’s been facing down gods for most of her life; one more ain’t a thing for her. Wonder Woman’s power and skill have helped her defeat him every time they’ve faced each other.

While Darkseid has gotten close to defeating her and even snared her with the Anti-Life Equation, he never beat her in a fight. Wonder Woman was able to outthink the God of Evil and teach him something many villains have learned- never underestimate Wonder Woman.

6 The Spectre’s Power Would Overwhelm Darkseid

The Spectre is one of the most powerful beings in the DC Universe. He was even able to hold back the Anti-Monitor, which is no easy feat. The Spectre is the Angel of Vengeance and his ability to alter reality is pretty much unstoppable. Darkseid has never defeated someone who can match him power-wise and the Spectre would almost certainly overwhelm him.

The two have rarely crossed paths and one sort of believes that’s on purposes- Darkseid is no fool and he knows just how dangerous the Spectre could be to him. Darkseid is known for playing the long game but even he would have a problem defeating the Spectre.

5 The Legion Of Superheroes Were Able To Defeat Darkseid

By the 30th century, Darkseid was long forgotten but that doesn’t mean he forgot about the rest of the universe. Rebuilding his power base, he clashed with the Legion of Superheroes, using powerful simulacrums of Superman, Orion, and an Oan to smack the team around. He even enslaved the entire population of Daxam and sent them against the United Planets.

This bought him time to restore his full power but the Legion had realized who he was and built a plan, one which allowed them to defeat the former Lord of Apokolips, ending his terrible threat to the future once and for all.

4 Lightray Has Always Survived Against Darkseid

RELATED: DC: 5 Ways Darkseid Is The Greatest Villain In The DC Universe (& 5 He’s Not)

Grail was Darkseid’s daughter and wanted nothing more than revenge against him. So, she took advantage of the coming of the Anti-Monitor to pit the two beings against each other, with the Justice League stuck in the middle. Grail’s quest was entirely successful, as well- Darkseid was destroyed by her machinations.

Since then, Grail has pretty much disappeared but her battle against Darkseid was her most impressive moment. She was able to out scheme the master of evil schemes and defeat him, getting her revenge.

2 Orion Has Always Beat His Father

There is a prophecy at the core of the New Gods and it’s that Darkseid’s son will end him. That son is usually Orion. The Dog of War was raised on New Genesis as part of the peace deal between New Genesis and Apokolips and was the most powerful of Darkseid’s children. Over the years, Orion has always defeated his father.

The closest Darkseid ever came to defeating Orion was when he fired a Radion bullet into the past to kill his son, but even that’s not really a victory- it was more of an inevitability. Darkseid has tried many times but he’s never really beat his son.

Darkseid and Superman have clashed more than any other non-New Genesis hero has with the God of Evil. Superman takes his responsibility to the universe very seriously and Darkseid is a threat to every innocent being alive. Superman can’t help but fight against that and the two have had some amazing battles over the years.

No matter how much Darkseid tries, he’s never been able to actually defeat Superman. The Man of Steel is always one step ahead of Darkseid and he’s been fighting the God of Evil for so long, he knows how to contend with the villain. He may not be able to win on his own but he always holds out long enough to save the day.

NEXT: 10 Darkseid Comics That Will Never Be Adapted


Next
The 10 Most Villainous Things Marvel Heroes Ever Did