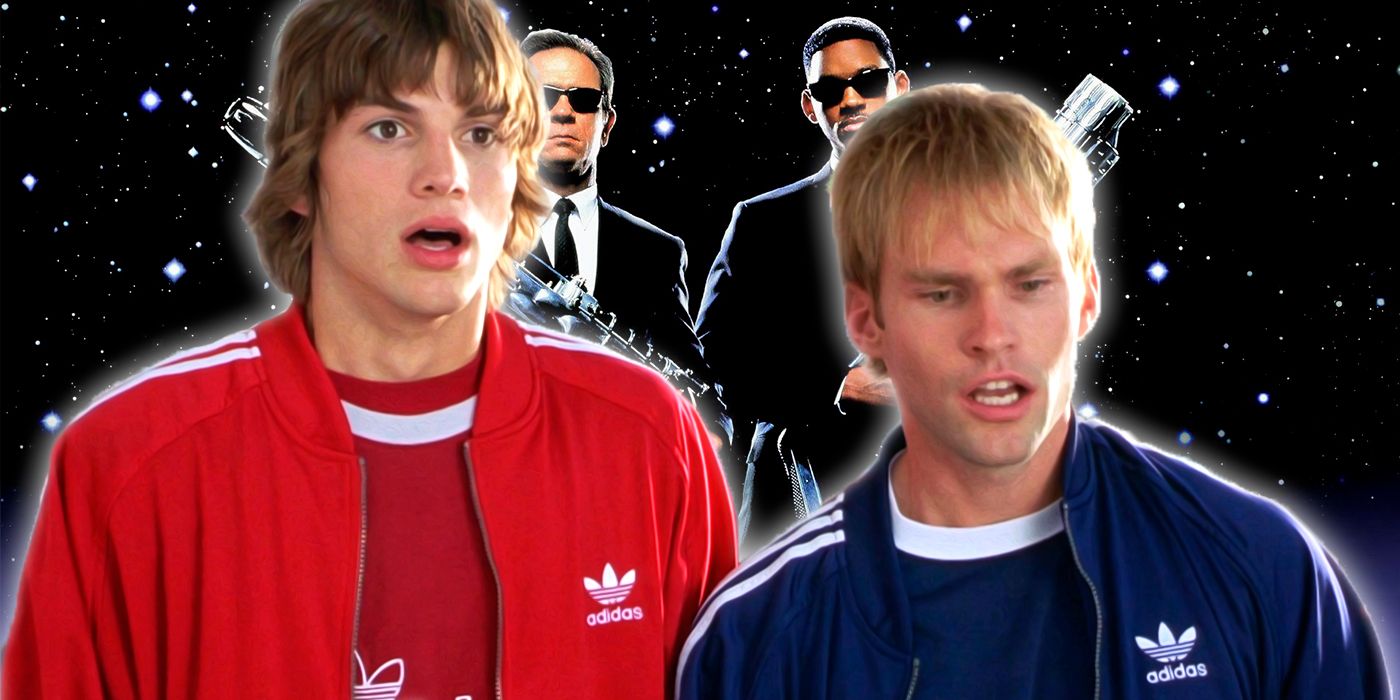 Dude, Where’s My Car? is a 2000 comedy about two friends who wake up from a wild night they can’t remember only to find their car is missing. As Jesse (Ashton Kutcher) and Chester (Sean William Scott) retrace their steps, they realize their previous night leans heavily into the realm of science-fiction, as they face off against alien species with both benevolent and malicious intent. While played solely for laughs, one theory believes its sci-fi influences have strong ties to Men in Black.

Initially presented on Reddit by user Beneficial-Piano9756, the theory posits that Jesse and Chester can’t remember the previous night because they were neuralized and forced to forget. However, instead of Agents Jay (Will Smith) and Kay (Tommy Lee Jones) wiping their minds, female aliens who can combine into a giantess do so, and the theory adds that these aliens have the neuralyzer instead of the MIB because it was stolen after the agents failed to stop them the first time.

In Men in Black, neuralyzers are among the most important tools. They allow agents to hide in plain sight by flashing civilians with a bright light, thus allowing the agents to wipe their minds and suggest new memories for them. The same type of technology also plays a role in Dude, Where’s My Car? even after the film’s main characters awaken with amnesia, but it’s not Jay and Kay wielding it. This technology reappears with another pair of glasses-wearing protectors.

In Dude, Where’s My Car?, a pair of Nordic twins wearing leather and sunglasses claim to be aliens and protectors of Earth. They are among the multiple groups hunting down Jesse and Chester, but rather than harm them, they want to ensure the Continuum Transfunctioner, a weapon of untold power, doesn’t self-destruct. The twins side with Jesse and Chester in the beginning and save the world from an explosive end.

RELATED: Why Robin Williams Quit His Role As Howard The Duck After Filming Started

According to the theory, it’s also believed the twins are backup agents sent by the MIB after Jay and Kay were unable to complete their mission. While outlandish to consider, because they don’t even wear black, the theory has some logic. They operate similarly to the organization, acting as intergalactic police officers. They even wipe Jesse and Chester’s minds in end.

Dude, Where’s My Car? is an unconventional comedy even for its own time, thanks to its sci-fi elements and outrageous plotline, but when paired with the theory that Jesse and Chester are victims of the Men in Black’s endless battle to protect Earth, it makes more sense. That being said, the theory isn’t perfect, mainly when it comes to the presence of Jay and Kay. The two agents primarily operate in New York; however, Dude, Where’s My Car? takes place closer to the midwest. Plus, Jay and Kay are too capable to let their neuralyzers be taken by the enemy, but perhaps two other agents could’ve failed their missions, with the twins coming in to clean up the mess.

Jesse and Chester are undoubtedly the victims in Dude, Where’s My Car?, from getting amnesia twice to constantly being hounded by beings from Earth and outer space. However, thanks to the theory, these strange events are possibly tied to the Men in Black. From the twins wanting to send the “super hot alien giant” to Hoboken, New Jersey to the strange alien cultists the duo meet, every odd occurrence fits perfectly into the Men in Black aesthetic and adds more credence to the strange humor found in Dude, Where’s My Car?