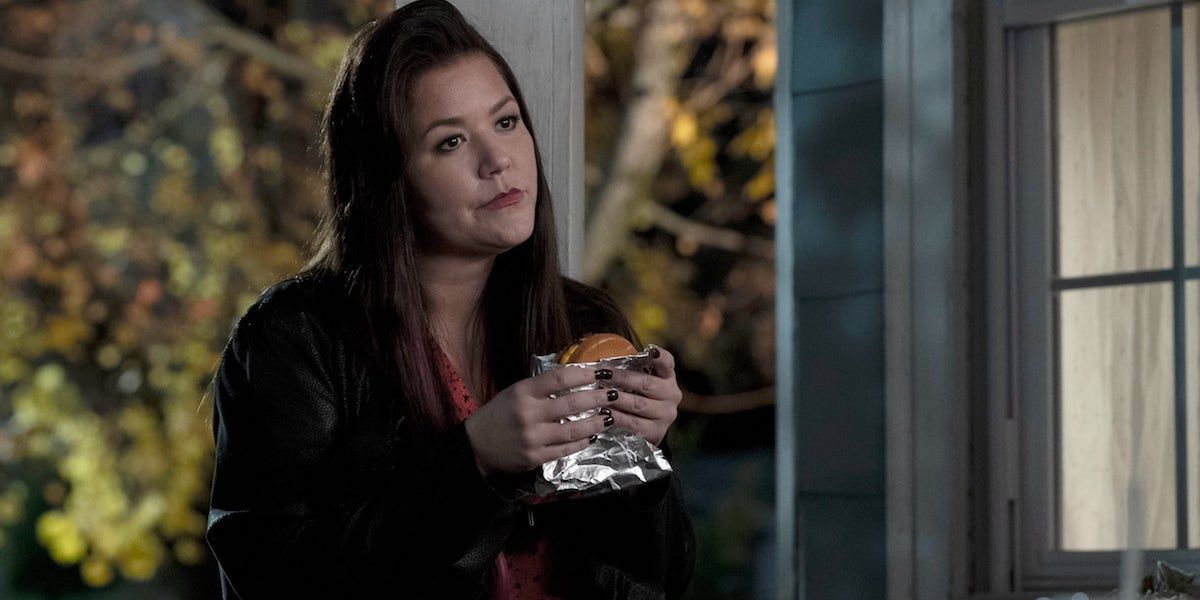 WARNING: The following contains spoilers for the Season 1 finale of Kevin Can F**K Himself, “Fixed,” now available on AMC.

One of the most intriguing aspects in Season 1 of AMC’s Kevin Can F**k Himself has been how Patty (Mary Hollis Inboden) has opened up. She initially seemed closed off — like one of the guys in Kevin’s crew — but as the show progressed, she’s shown a human side as she tries to help Allison (Annie Murphy) murder her husband. However, in the final couple episodes, there are strong hints that Patty and Allison might have a romantic thread lingering.

Patty’s story is odd as she was in a relationship with Kurt, a guy who worked at the pharmacy that fueled her drug trade, but it was lacking intimacy, sex and, well, love on the whole. She and Kurt broke up, and just when it seemed like Tammy, a detective, was onto Patty, it turned out that Tammy just liked her.

Tammy and Patty struck up a romance, and while it appeared like Patty was spying on her to get info to ensure she and Allison didn’t enter Tammy’s criminal books, Patty actually developed feelings for Tammy. But even the cop noticed there was something more with Patty and Allison, ergo that bit of jealousy. She thought it was more than friendship, realizing that they needed each other as emotional support.

It felt like detective intuition more and more as we saw how far the women would go to save each other, especially Patty. She knocked out a trucker she thought was harming Allison on a road trip, and in the finale, when her brother Neil accosts Allison after overhearing the murder plot, Patty rushes back into the house and smashes a bottle over his head. She could have killed him, but is now left warning her sibling not to mess around.

RELATED: Kevin Can F**k Himself Does Alternate Realities Better Than WandaVision

That’s a huge red flag that hints at love, and when you reconcile prior incidents, it feels like Tammy had valid reason to be concerned. Patty sitting with a depressed Allison in a tub drinking wine, counseling Allison as she broke down in the living room, and risking her safety by scrounging through Tammy’s notes to ensure Allison’s not in danger all show that Patty will go the distance. The thing is, when they fight over the spying drama, Patty even says she doesn’t have to do all this. The fact that she left Tammy in her salon to confront Allison over these problems, preferring to do it in person, speaks volumes.

As Allison admits that she needs Patty, you can sense Patty’s waiting to hear Allison admit that it’s something more than friendship. It ties into when Tammy inquired about her being Patty’s first lesbian relationship. Patty admitted that she’s never gawked at a girl before but Tammy can’t see that being true, especially as Allison’s pretty and all.

Given how Patty offered up info on Kevin ruining Allison’s savings in the first part of the season and then began working with her to score drugs and get Kevin killed, it does seem like it’s more romantic than platonic. And it looks like all it took was Tammy for Patty to realize and accept this truth. The fact that Patty keeps choosing Allison over her friends and her own blood suggests as much, and as Allison refrains from moving on to Sam, it might be that she also has feelings, which a potential Season 2 could explore.

Season 1 of AMC’s Kevin Can F**k Himself is officially complete. All episodes are available to stream on AMC+.

What We Do in the Shadows S3: Release Date, Plot, Trailer & News to Know
Related Topics