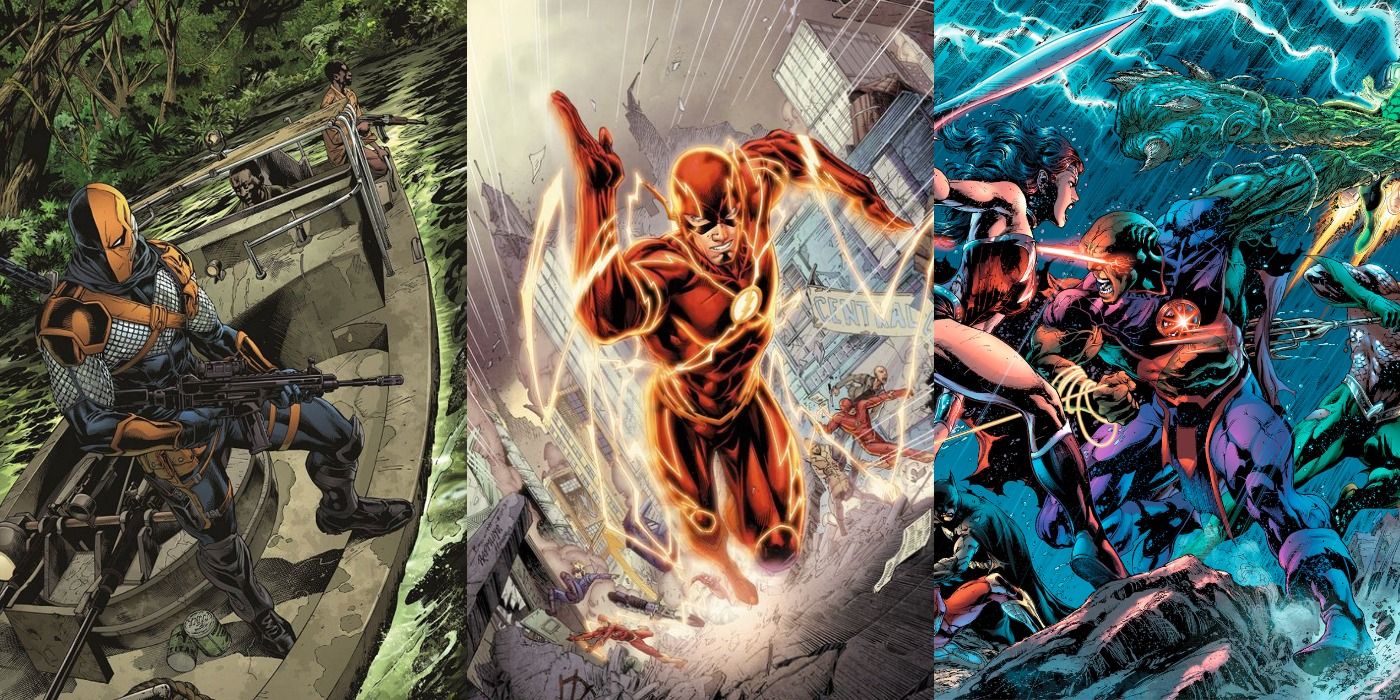 RELATED: Justice League: 5 Reasons They Should Adapt New World Order (& 5 Why They Shouldn’t)

One might imagine that the Flash would have a difficult winning this fight if it took place underwater. The Flash would have trouble using his speed effectively beneath the waves while Aquaman is at his most powerful when submerged.

9 The Flash Has A Bad Track Record Against The Cheetah

Both Wally West and Barry Allen have had opportunities to prove their fighting skill against longtime Wonder Woman foe, the Cheetah. Unfortunately for both Flashes, neither has actually done that well against Barbara Minerva.

RELATED: 10 One Off Comics That Deserve A Full Series

The Cheetah ambushed Wally on the Watchtower once, and she slashed Wally’s spinal cord, leaving him helpless. More recently, Barry tried to fight Cheetah in the jungles of South America, only for her to dodge his attacks and sever the muscles in his legs.

Brainiac has caused trouble for the Justice League on several occasions, and Wally was the one who famously brought down the Brainiac/Lex Luthor hybrid in the Justice League: Unlimited cartoon. Despite that, the Flash hasn’t really taken on Brainiac much in the comics.

Presumably, they’ve met, but no Flash has ever brought down Brainiac in the comic book universe. Brainiac is usually more preoccupied with Superman or space-faring heroes–not Central City speedsters.

The Flash, namely Wally West, has come to blows with Martian Manhunter on at least one occasion. J’onn was caught in a confrontation with his fellow Justice Leaguers thanks to the machinations of Malefic. Wally tried to use his superspeed to keep Martian Manhunter off-guard and remove him from the fray.

Unfortunately for Wally, he’s not particularly equipped for psychic combat, and J’onn was able to subdue the Flash with his telepathy.

6 The Flash Hasn’t Taken On Sinestro Yet

Despite Barry Allen’s close friendship with Green Lantern Hal Jordan, the Flash has yet to take on Hal’s most enduring foe, Sinestro. They’ve been on the opposite sides of battles such as the recent war between the Justice League and the Legion of Doom, but they two haven’t fought directly.

It’s unclear how well the Flash would do in such a fight, as Sinestro is especially powerful, smart, and creative. It doesn’t seem like a fight Barry or Wally would win easily.

There has been an occasion that saw Barry Allen fighting Hal Jordan. The fear entity Parallax possessed the Flash and caused him to attack the Green Lantern.

It was a brutal fight for Hal Jordan, but he was ultimately able to restrain his friend and ultimately exorcised Parallax out of Barry Allen.

4 The Flash Has Never Met The Joker Except In Passing

Weirdly enough, the Flash hasn’t actually met the Joker except in passing. There is a memorable moment from Crisis on Infinite Earths by Marv Wolfman and George Perez that saw Barry Allen passing through time and briefly encountering the Joker in the past, but they’ve never fought.

Needless to say, one would imagine that the Flash would make quick work out of the Joker, as the Clown Prince isn’t used to dealing with someone capable of the Flash’s speed.

There is a famous moment from Identity Crisis by Brad Meltzer and Rags Morales where Deathstroke the Terminator takes on the entire Justice League and beats all of them individually, including stripping Hawkman’s gear, causing Zatanna to vomit, and exerting his will over Kyle Rayner’s ring.

Slade was also able to beat Wally West by predicting his move and sliding a blade into his shoulder, then twisting it. There is actually an earlier encounter between Wally as the Flash and Deathstroke which ended with Slade tripping the Flash so he could get away.

2 The Flash/Superman Rivalry Hasn’t Come To Blows (Yet)

Superman and the Flash have raced on more than one occasion as part of their friendly rivalry. It does lead one to wonder who would win in an outright fight between the two.

The answer seems to be obviously Superman, but, when the two first met in the New 52 continuity, Superman was having a hard time even laying a hand on the Flash thanks to his incredible speed.

1 No Single Justice Leaguer Has Ever Beaten Darkseid

Then there is Darkseid. While the Flash has been able to at least subdue him with the help of the entire Justice League, Flash wouldn’t stand a chance against Darkseid in a solo fight.

Being the Fastest Man Alive doesn’t mean a lot when the opponent is nigh-invincible and doesn’t even fully exist on this plane of reality. Worse yet, the Omega Beams have a nasty way of catching up with everyone they’ve ever targeted.

NEXT: DC: 10 Cosmic Beings That Can’t Control Their Powers


Next
10 Times Superman Was A Good Role Model

Josh Davison is a list writer for CBR, The Gamer, and Game Rant. He is well-versed in all things Marvel, DC, Pokemon, and Star Wars and has a deep passion for horror. He has a terminal obsession with the Thunderbolts, the Winter Soldier, Luke Cage, and Hawkman. He is currently trying to make it as a comic book writer and is a part of two upcoming anthologies: Turning Roads by Limit Break Comics and Producing the End of the World by publisher Soda & Telepaths. Find him sharing cool comic art and cute animals on Twitter, @joshdavisonbolt

Disney CEO Discusses the Idea of Adding Ads to Disney+ | CBR
Dexter’s Michael C. Hall Reveals the Four Episodes to Rewatch Before New Blood
Scarlet Witch: The Mystical Avenger Has Marvel’s Wildest Powers and History
Why the Super Lightsaber in Visions Is Star Wars’ Most Powerful Weapon
What If: How Marvel’s Multiverse Reimagined the Hulk Without Bruce Banner