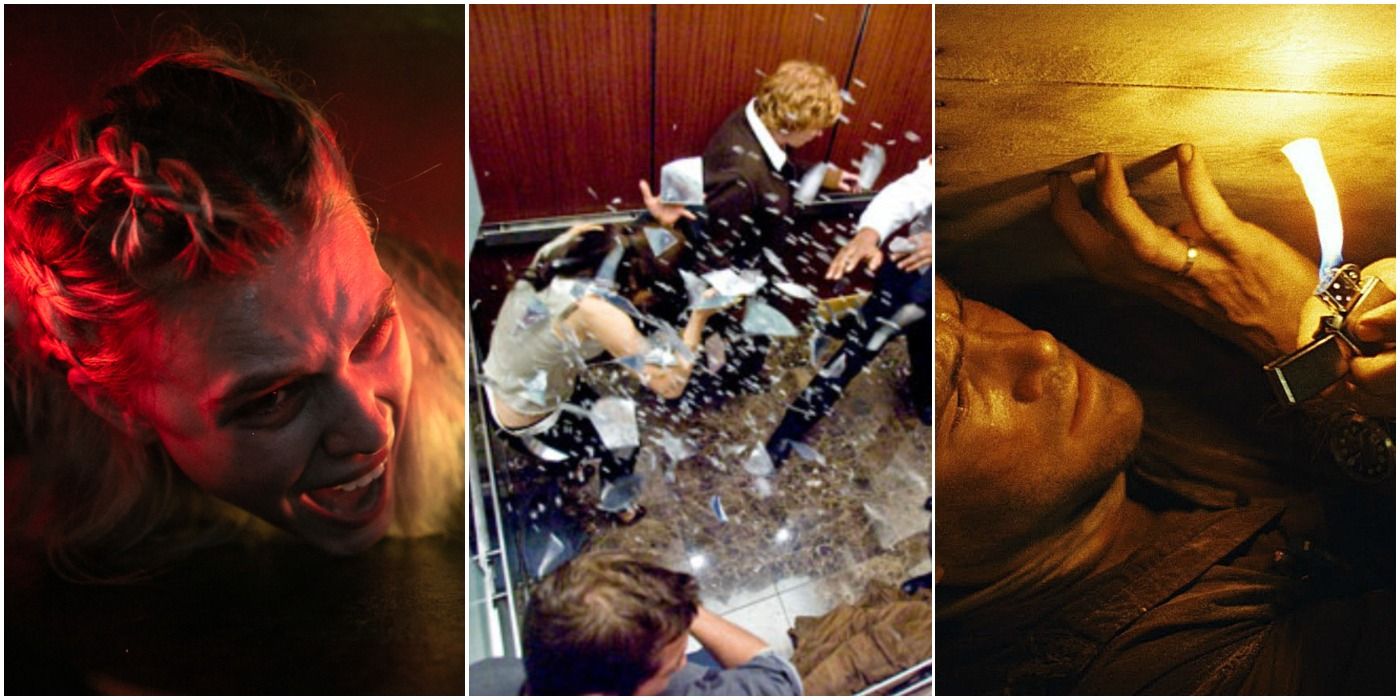 One of the luxuries of the film industry is that movies can tackle any type of subject matter and make the impossible feel within grasp. Slick editing, special effects, and an expansive scope can allow movies to tell stories that cover hundreds of years and thousands of miles of land. It’s exciting when movies can indulge in this manner and showcase locations that would normally be outside of the audience’s reach, but it can often be even more thrilling when movies strip themselves down and limit their tools.

There are certain technical elements that can come across as gimmicks with movies, but when they’re done properly, they can deliver results like nothing else. It’s not common for movies to restrict themselves to a single location, but there are some excellent examples that make use of this convention.

10 Buried Is The Ultimate Claustrophobic Experience

One of the most powerful scenes in Quentin Tarantino’s Kill Bill Vol. 2 involves the central character being buried alive in a coffin. It’s a tense sequence where every minute is felt, yet Buried is a movie that pushes this anxiety to the extreme.

Buried is an ambitious picture that features a very against-type Ryan Reynolds buried and with limited time to figure out what’s happened to him and how he can escape. Buried faces natural limitations, but it’s a remarkable experiment that successfully sustains its premise. Buried has no choice but to work extra hard on its storytelling.

M. Night Shyamalan has more or less reclaimed his reputation as an innovative filmmaker, but the director faced a rough patch that pushed him into producing a series of “Night Chronicles” movies that feature trademark Shyamalan storytelling, but with other directors at the helm.

Devil pushes the captivating plot of a number of seemingly ordinary individuals getting trapped inside of an elevator, only one of them is actually the devil. The movie turns into an enlightening character study with a deep element of fear that runs through it all. Devil isn’t perfect, but it still beats taking the stairs.

Cube is a classic minimalist movie that could qualify on this list, but the recent French thriller, Meander, expands on the premise, but with a more sadistic side of the Saw franchise thrown in for good measure. The mysterious movie, which is nearly void of dialogue, follows an oblivious woman’s struggle to survive through her labyrinthine and tiny prison.

She has a limited amount of time to navigate through each area otherwise she’ll meet a gruesome end. Meander is an onslaught from start to finish and it actually manages to say some deep things about grief, acceptance, and loss.

There’s a stark transition between theater and cinema, with one of the most significant differences being movies’ ability to edit and more easily transition between scenes. However, there are rare occasions where movies can function like traditional pieces of theater and resonate more strongly because of this old-fashioned approach to storytelling.

12 Angry Men is a strong example of what can be done in this territory. It’s a courtroom drama where the dialogue and characterization are what’s important. It proves that different perspectives and engrossing arguments can be infinitely compelling, even if nobody goes anywhere.

The majority of Alfred Hitchcock’s movies are memorable pieces of cinema, but 1944’s Lifeboat is a masterpiece in minimalism that still holds up to this day. As its title implies, the movie is set entirely on a crowded lifeboat that’s full of the survivors of a ship that’s recently sunk.

The American and British passengers pull aboard a German survivor and suddenly paranoia and tensions mount as the germ of distrust spreads through everyone. It’s an incredible analysis of the fear of the unknown and the power of mob mentality.

5 Locke Highlights The Toll Of Life Through An Understated Filter

Many movies examine the worst day in someone’s life, but the Tom Hardy vehicle, Locke, explores this drama in a striking manner. Hardy’s character is stuck in his car as he drives to be present for the birth of his child, but he’s subjected to non-stop phone calls where his life progressively crumbles.

A crucial factor in whether single location movies work or not is the rationale behind its minimalist setup, but also how this limitation can enhance the story. Rear Window is a classic for both Hitchcock and Jimmy Stewart that tells an engrossing murder mystery that’s sparked through boredom and voyeurism.

Stewart’s L.B. Jeffries is confined to a wheelchair and physically can’t leave his apartment. Rear Window forces the audience to be restricted in the same manner and they can only witness what Jeffries can. The movie’s editing brilliantly reflects the disadvantages of its protagonist.

A terrifying scenario to be trapped in is a confusing hostage situation that plays out in broad daylight, only nobody can tell that anything is awry. Grand Piano is an exceptional thriller that stars Elijah Wood as an accomplished pianist that must flawlessly play through one of the world’s most demanding pieces of music, otherwise, a sniper will take him out.

Admittedly, there are brief scenes on an airplane and a limo, but the rest stays put. There are a lot of similarities between Grand Piano and something like Phone Booth, but Grand Piano edges out its competition.

The One I Love is such a surprising and unusual hybrid of genres that feels like an excellent episode of The Twilight Zone. A struggling couple turns to a weekend of couple’s therapy at an isolated lake house, but the situation quickly complicates when duplicates of themselves enter the picture.

What follows is an insightful look into relationships and codependency, but with a mysterious supernatural slant. The One I Love traps its characters with themselves, literally, and forces them to answer difficult questions. It’s minimalist, but also a delicate balance of tones that a weaker movie would fail to accomplish.

The Saw films have become major cultural landmarks in the horror genre, not just for helping establish James Wan’s career, but for the creation of one of the most significant modern horror franchises that still continues to this day. Saw’s sequels become progressively focused on exaggerated torture and complex plot twists, which makes it easy to forget that the original movie is an exercise in minimalism.

Saw works so well because it’s just two panicked individuals that are trapped in a confined room with a weapon and what appears to be a corpse. It’s the ultimate “locked room mystery.”

NEXT: The Avengers: 10 Locations Fans Want To See In The Upcoming Marvel Video Game