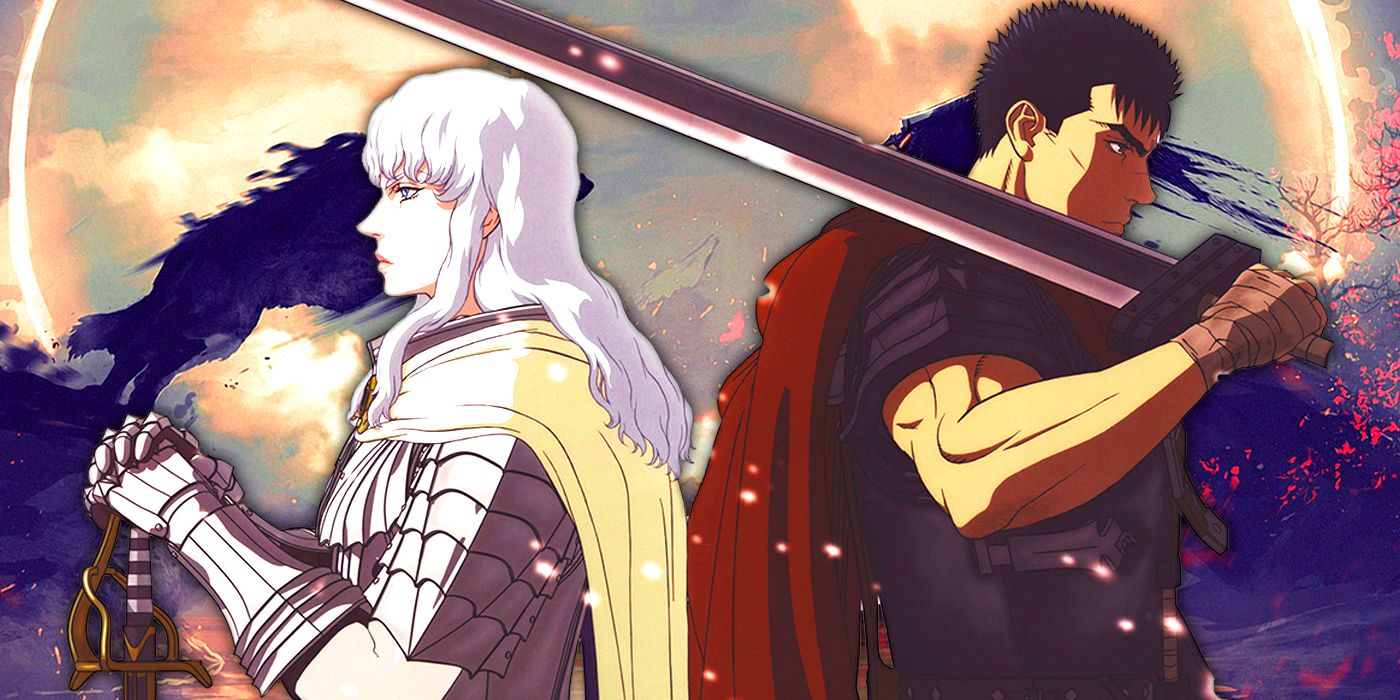 The Berserk anime/manga series is widely renowned for many reasons. While the late Kentaro Miura knew how to draw exciting and brutal action scenes, the heart of Berserk is the emotional and personal connections between its characters, adding a palpable human element to this dark fantasy saga. This is especially true of Guts and Griffith.

In some vital ways, Miura borrowed elements from the shojo genre to flesh out these characters’ relationships to one another, adding much-needed personal stakes to the battles, betrayals and adventure. In particular, the fateful relationship between Guts and Griffith formed and developed the most during the Golden Age story arc. Let’s take a look at how.

RELATED: Berserk: Why You Should Still Read the Manga, Now More Than Ever

When Griffith Dueled Guts & “Claimed” Him

Guts already had some mental scars by the time he was a teenager in Berserk and wasn’t about to open his heart to anyone — not even the charismatic Griffith, leader of the Band of the Hawk. When the two met, however, Griffith took the initiative and they forged a strong bond despite Guts’ lone-wolf ways.

For Griffith, it was practically love at first sight, and he and Guts engaged in a semi-friendly duel. If Griffith won — which he did — he would claim Guts as the newest agent in his mercenary band. Guts was bewildered but couldn’t find it in himself to say no, and he soon learned that Griffith always gets what he wants. This also put Guts at odds with Casca, who had hoped Griffith would see her that way instead.

RELATED: Berserk: The Band of the Hawk Was Doomed From the Start – Here’s Why

When Griffith Explained That Guts Is His Ultimate Frenemy

Guts was content to merely be Griffith’s top fighter for a time, but Griffith saw more layers to their relationship. Deeply impressed by Guts’ sheer badass attitude and incredible fighting ability, Griffith saw him as both his best asset and his greatest enemy. He aspired to be the ultimate being and saw Guts as a rival, a challenge to overcome.

As Griffith explained, Guts is his ultimate friend because he is also his ultimate threat and rival, and thus opposition and friendship are paradoxically intertwined. In short, Griffith told Guts “I need you because you’re my ultimate challenge.” Not many characters in shonen or seinen manga would actually say that sort of thing aloud, but Griffith certainly did.

RELATED: Berserk: The 5 Biggest Plot Twists of the Golden Age Arc (& Why They Matter)

During Berserk‘s Golden Age story arc, little of Griffith’s internal dialogue is shown so it’s not entirely clear what he truly feels about Guts. Is he actually in love with Guts? That is not 100-percent clear either way, but when Guts wanted to leave the Band of the Hawk, Griffith reacted badly. He desperately needed his frenemy by his side and felt betrayed when Guts declared he would find his destiny elsewhere, alone.

Griffith challenged Guts to another duel to echo their first meeting — but this time, Guts won. He departed the gang without a care in the world while Griffith felt invalidated and hurt, driving him to take drastic steps to keep pursuing his ultimate goal. This was a watershed moment for Griffith, and later events in Berserk would prove Guts wasn’t done with him just yet. Something was still holding them together, even if Guts couldn’t easily describe it in words.

RELATED: Berserk: How the God Hand Turned Griffith Into a Supervillain

When Guts Volunteered To Help Rescue Griffith One Year Later

Guts’ departure made Griffith snap as he went, well, berserk. He spited the King of Midland by seducing his daughter Charlotte, ending up captured and tossed into a dungeon for an entire year. The Band of the Hawk fell on hard times, with Casca barely keeping the gang together, but Guts finally returned to help. They, along with Judeau and a few others, embarked on a rescue mission to retrieve Griffith and succeeded.

Like Casca, Guts remained highly protective of the frail Griffith. He clearly hoped to gain something from Griffith’s leadership, and this tight bond between them would directly lead to Guts’ incredible rage and heartbreak when Griffith made his next move. If he hadn’t come back for Griffith due to their bond, Guts’ personal arc in Berserk would have turned out very badly — and he wouldn’t have been there for the fated eclipse.

When Guts Witnessed Griffith’s Betrayal During The Eclipse

This scene was a turning point for Guts’ and Griffith’ relationship, and indeed the entire story of Berserk. The long-foretold eclipse took place as Griffith activated his “egg of the king” behelit, and the four current members of the God Hand arrived in a supernatural maelstrom. Griffith took the next step toward achieving his grand dream, sacrificing everyone around him so he could be reborn as Femto, the fifth and final member of the God Hand. Guts and Casca barely survived, but not without Griffith violating Guts’ lover. From then on, Guts swore he would destroy Griffith one day, no matter what it took.

Mortal enemies bound by fate, Guts’ entire life becomes dedicated to healing the mentally and physically wounded Casca while bringing justice to Femto/Griffith the betrayer. But the enraged and wounded Guts might find redemption along the way, healing himself as well.