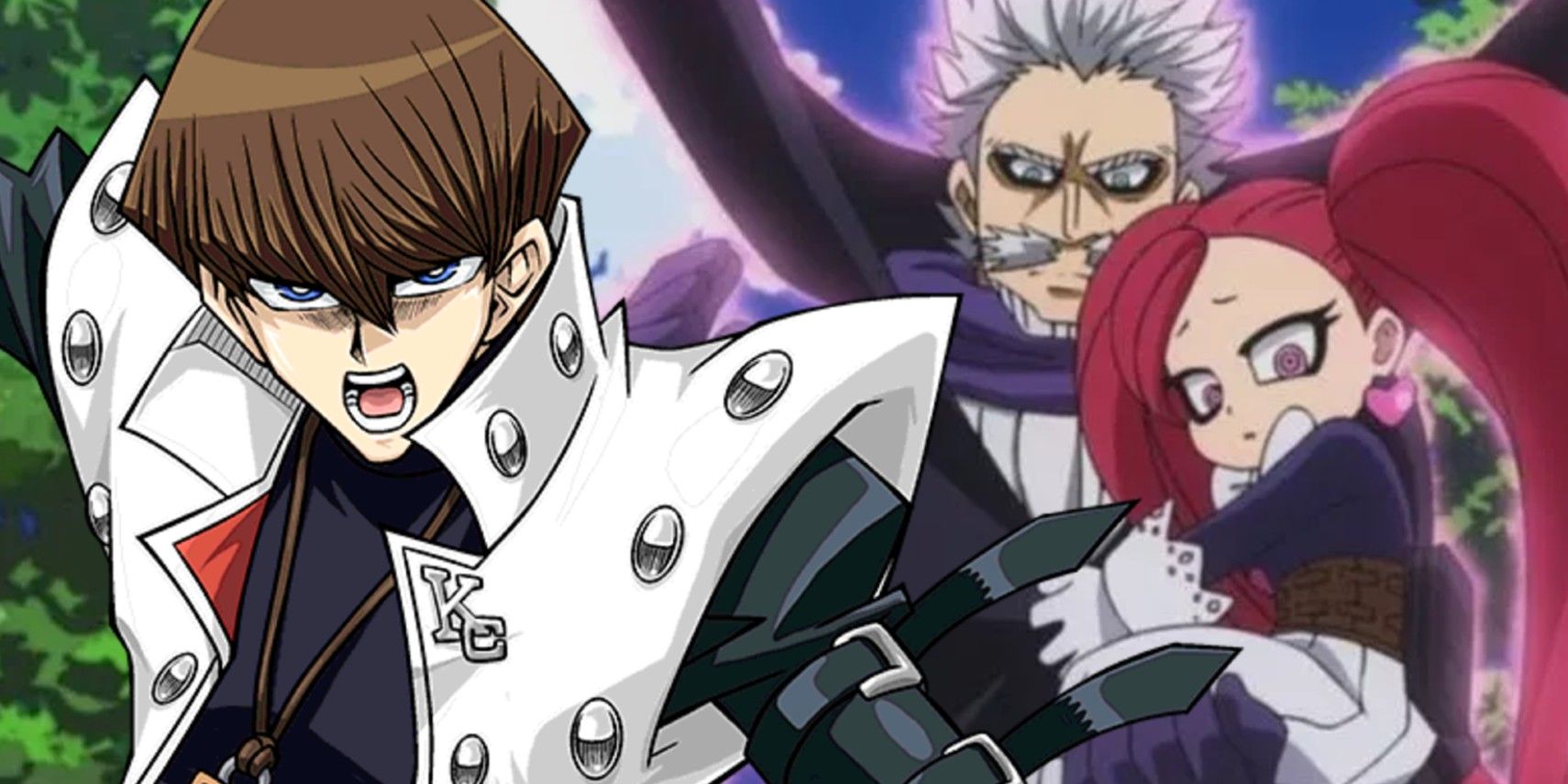 With just a few evil deeds, an anime villain, whether they’re the mastermind or the lieutenant of one, can easily command fear and respect. However, some bad guys are destined to either be mocked by everyone around them or not even acknowledged at all.

Though more antagonist than a straightforward villain, Yomotsu Hirasaka was still one of eleven other Diary Users who tried to kill Yuki and Yuno. That, and he wasn’t above brainwashing, kidnapping, and beating up litterbugs in the name of justice. Despite that, nobody took him seriously because it was impossible to do so.

Yomotsu branded himself as Twelfth, The Hero Of Justice who was styled after tokusatsu heroes like Super Sentai (Power Rangers) or Kamen Rider. He even had his own superhero group, The Justice Rangers, though he hypnotized his fellow “heroes” into joining. Unfortunately for Twelfth, everyone mistook him for a supervillain and he was killed off the episode after his introduction in Future Diary.

The anarchist Ted Bower knew the truths of Cowboy Bebop’s world: mankind’s unstoppable galactic colonization and industrialization created an uncaring society where human life became a disposable commodity. Too bad nobody wants to listen to him. Worse, he’s almost always ignored, even when his bombs go off.

Every time Teddy was about to launch into his practiced political tirade, Cowboy Andy burst into the scene and broke into a fight with Spike Spiegel. Neither took Teddy seriously to the point that Spike diverted his attention towards beating up Andy and Andy didn’t even know who Teddy was, leading to the terrorist’s disillusionment.

8 Space Dandy – Dr. Gel Wasn’t Even Noticed By The Heroes Until The Finale

For mysterious reasons, Admiral Perry of the Gogol Empire tasked Dr. Gel to hunt down Space Dandy and capture him alive. Dr. Gel sets out to fulfill his mission, but despite his best efforts, he’s always one step behind Dandy and died more than once during the pursuit. To add insult to injury, Dandy didn’t even realize that Dr. Gel was chasing him in the first place.

Dr. Gel’s endless deaths and humiliations suddenly make sense when the anime’s multiverse truths are taken into account, but none of them help elevate Dr. Gel from being the comic relief villain. He finally showed what he was capable of in the finale, but before then, Dr. Gel was always the anime’s episodic punchline.

Before Dragon Ball became a martial arts epic, Emperor Pilaf and his loyal minions, Mai and Shu, were the biggest threats a young Son Goku faced. Specifically, they kept annoying Goku by interrupting his heroics with what amounted to pranks. The Pilaf Gang were bad guys from a children’s cartoon, and they were as hilariously inept as that description implies.

The Pilaf Gang was so childish that when Shenlong reverted them into children after misunderstanding Pilaf’s wish for eternal youth, their threat levels weren’t affected at all. For what it’s worth, the Pilaf Gang is actually one of the very few Dragon Ball villain factions to successfully collect all of the Dragon Balls and get an audience with the immortal dragon.

To Sonic’s credit, he’s one of Saitama’s few enemies who didn’t just survive his one-hit-kill punch, but he fought the hero more than once. The trade-off is that Sonic always lost to Saitama in the most embarrassing ways, with his first defeat (a slow-motion punch to the nether regions) becoming one of One-Punch Man’s most iconic moments.

Sonic trained harder than he ever did in his life, but always lost to Saitama whenever they met up. To add insult to injury, Saitama had a tendency to forget Sonic’s alias, much to the ninja’s chagrin. For these constant humiliations, Sonic considers Saitama to be his nemesis, though the hero couldn’t be bothered either way.

JoJo’s Bizarre Adventure has its fair share of goofy villains and walking memes, but none of them were as unlucky as the brothers Oingo and Boingo from Stardust Crusaders. Despite being given what are arguably some of the show’s more underrated Stands, Oingo and Boingo are more of a comic duo than double trouble.

Despite their best efforts to assassinate the Stardust Crusaders, Oingo and Boingo never get anything right. They’re so harmless that the Stardust Crusaders didn’t even realize that the brothers were trying to kill them. Additionally, they’re so unlucky that when the equally bumbling Hol Horse teamed up with them, their chances got even worse.

Gentle Criminal and his sidekick, La Brava, are social rejects who’ll do anything for some online clout. While initially played for laughs, the fact that nobody took the two seriously is actually what motivates them. Everything they did was part of their futile attempts to gain even a modicum of respect from the hero society that cast them out in the first place.

Since they only wanted attention, Gentle Criminal and La Brava committed petty crimes and avoided seriously harming anyone. Though this defined them as campy hoodlums who belonged in a Silver Age comic, their restraint caused no one to consider them as actual threats. They were only seen as such when they tried to crash the UA School Festival, and the only one who took them seriously was a teenager named Midoriya Izuku.

3 One Piece – Spandam Is Despised By Everyone

He may have been a top Cipher Pol officer, but Spandam is one of the most inept characters in all of One Piece. Unlike almost everyone else on this list, though, Spandam’s lack of respect isn’t a joke. Nobody takes Spandam seriously because he’s a cowardly sadist who only gets away with it thanks to his authority …that he achieved through nepotism.

RELATED: One Piece: 10 Fights Everyone Forgets About

Spandam was so incompetent that his backstabbing schemes backfired so hard that it led to the fall of the fortress Enies Lobby, his department CP-9 getting branded as fugitives, getting himself stripped of his rank, and Nico Robin breaking his back. His post-time skip survival and recovery inspired no cheers or sympathy from anyone.

After spending more than two decades trying and failing to abduct a single Pikachu from a meddlesome kid, the Team Rocket Trio (Jesse, James, and Meowth) basically forfeited any right to be taken seriously both in and out of their anime. Not helping is how all of their bumbling plans were always doomed to fail, earning the ire of literally everyone.

This isn’t a bad thing, though, since they found new life as one of pop culture’s most beloved comic relief troupes. In fact, they’re even regarded as anti-heroes by their more dedicated fans. Team Rocket may be hard to take seriously as bad guys or even Ash’s rivals, especially when they ride their Meowth-shaped hot-air balloon, but they’re all the better for it.

1 Yu-Gi-Oh! Duel Monsters – Seto Kaiba Was Immortalized As A Meme

Whether it’s Maximillion Pegasus or Marik Ishtar, every Yu-Gi-Oh! villain is too loveably over-the-top to take seriously. That said, every enemy duelist Yugi fought pales in comparison to his one true rival, Seto Kaiba.  Even before The Abridge Series’ mockery of him, Seto was already too goofy to be properly feared by either Yugi, his friends, or audiences.

The mere concept of Seto,  a teen billionaire prodigy who used his business empire to fund a children’s card game,  is enough to get some laughs, but that’s nothing to his narrow-minded determination to beat Yugi. Seto is so dead-set on victory that he diverted all his resources not only to perfect his strategies but to also make sure he beat Yugi in the most lavish arena money can buy.

NEXT: Yu-Gi-Oh: 10 Times The Anime Was Censored Outside Japan


Next
One Piece: 10 Fights Everyone Forgets About

CBR Staff Writer Angelo Delos Trinos’ professional writing career may have only started a few years ago, but he’s been writing and overthinking about anime, comics and movies for his whole life. He probably watched Neon Genesis Evangelion way too much, and he still misses video stores. Follow him at @AD3ofc on Twitter, or email him at delos3nos1992@gmail.com.

10 Selfish Anime Characters Who Learned The Value Of Friendship
Mob Psycho 100: Will Season 3 Ever Happen? | CBR
10 Movie Franchises That Bounced Back After A Terrible Entry
The Suicide Squad IS a Sequel – But to the Comics, Not the Previous Film
Blade Star Feels Bad for Trashing Black Widow, MCU | CBR