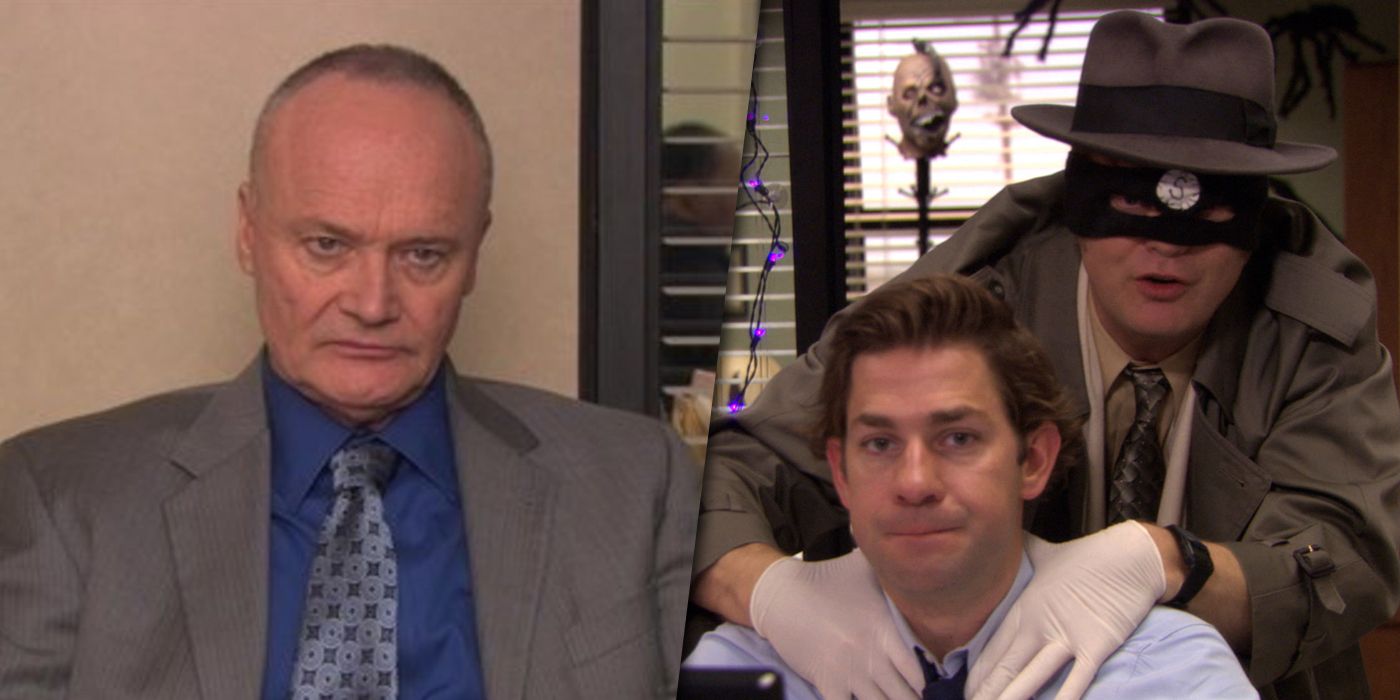 Fans have been obsessively watching The Office for years, which has only increased with the series’ arrival on streaming services like NBC’s Peacock TV. This has continued to develop a loyal fan base that frequently comes up with new theories that help explain the characters’ sometimes odd behavior as well as unexplored story points.

RELATED: Star Wars: Crazy Fan Theories That May Be True

While most of these fan theories don’t hold a lot of water and can be easily discredited, there are quite a few that find new life online as other fans help develop theories that begin to make a little too much sense, which we’ll take a closer look at today as we continue to explore the wonderful world of The Office.

10 Kevin Malone Is Secretly A Genius Who Is Embezzling Money

One of the most loveable characters on The Office is Kevin Malone from the accounting department who is known for his childlike innocence, big heart, world-famous chili and frequent accounting errors that ultimately end up costing him his job. However, Kevin has proven his intelligence with complex pie equations and his skills at the poker table that won him the World Poker Tour.

When he is fired, he is still able to buy a bar, and the temp who joins Dunder Mifflin points out his unique error (a “keleven”) known around the office. Finally, when Martin Nash’s past in prison was revealed and he explained his embezzlement crimes, Kevin revealed he did the same thing every day at work. Kevin Malone is a secret embezzling genius.

While there are a number of reasons for the contentious relationship between regional manager Michael Scott and his Human Resources rep Toby Flenderson, including the fact that it’s his job to confront Michael about his many inappropriate moments that he feels mean he gets to have no fun. However, one fan theory believes there’s a deeper reason that Michael hates Toby.

Over the course of The Office, fans learn quite a bit about Michael’s sad upbringing, including the fact that he was raised by a stepfather after his biological dad left the family. Michael clearly has issues tied up with his childhood that seem to project on Toby as he himself is a divorced dad, which Michael frequently uses to attack or define him when meeting new people.

While Bob Vance wasn’t an employee of Dunder Mifflin, he became a constant presence as first the owner of a neighboring business and later the husband of DM saleswoman Phyllis Lapin and later Phyllis Vance. He quickly became known by fans as he always introduced both himself and his business: “Hi, I’m Bob Vance, Vance Refrigeration.”

RELATED: Avatar: The Last Airbender – Crazy Fan Theories That May Be True

While it’s an effective business strategy, some fans theorized his frequent namedrops and even prize sponsorships for some of Michael Scott’s crazy events were all part of Bob Vance’s scheme to get free advertising using the documentary crew. True or not, the cameras were there and he successfully spread his company’s name to anyone who would listen.

The employees of Dunder Mifflin began to change over the course of the series as their characters were refined or exaggerated further. Kevin Malon’s silliness increased while Dwight Schrute’s intense professionalism succumbed to the same craziness that filled the rest of the office.

One of the theories that explain this change over the years is that the office of Dunder Mifflin is suffering from Radon poisoning, which is something Toby warns the staff about numerous times across the series only to be laughed at and disregarded. Some fans even think that the documentary crew was purposefully exposing the crew to Radon to intensify their behavior for the show.

Stanley Hudson is one of the more quiet and reserved employees of Dunder Mifflin, who hates his job and can’t wait to retire and move to the top of a decommissioned lighthouse where he can stay away from people.

However, one tragic fan theory posits that when Stanley suffered his heart attack at work, he actually died and went to Hell. And since he hates his job so much, hell for Stanley is him continuing to work at Dunder Mifflin, and the rest of the series takes place in Stanley’s dark and cruel eternal damnation.

While Jim Halpert might be considered one of the funniest or most romantic characters on The Office, his actions and behavior over the course of the series has lad to the creation of a number of fan theories that reveal Jim is actually a sociopath. To clarify, a sociopath is someone with antisocial tendencies who doesn’t consider the emotions of others and acts out of personal gain.

Jim fits that definition well through his numerous advances towards Pam while she was engaged that leaves other characters in his dust and his constant harassment of Dwight that occasionally pushes him over the edge for Jim’s amusement are just a few examples of sociopathic behaviors exhibited by Jim Halpert that lend strength to the fan theory.

Two of the most senior employees Dunder Mifflin were Stanley and Phyllis, who worked across from each other in the Sales department for years, well before the documentary crew began filming their daily lives. A fan theory alleging that Stanley and Phyllis had a one-night stand while he was married is backed up by interesting evidence from the show aside from their close bond.

RELATED: MCU: 9 Crazy Fan Theories That May Be True

Stanley reveals in the last episode that he had three affairs over the course of the show, though only two are mentioned (an unknown possible third is seen when the staff is in Florida though). When the staff are forced to reveal relationships, Phyllis asks if that even means one-night stands. While her partner is never mentioned it’s likely she’s talking about her oldest and closest work friend.

While there are quite a few interesting Creed Bratton theories that include the fact he likely murdered the original Creed and assumed his identity as referenced in the series, one of the most intriguing and enduring was the fact that Creed Bratton was not only a cult member, but he might have been a part of the Manson Family.

Putting aside the fact that he showed up on Halloween covered in blood and unaware it was Halloween, Creed also has extensive knowledge of cults and a drug-fueled past as a musician that makes him a prime candidate, and he details a past with established Manson Family members like Squeaky Fromme when giving relationship advice to Andy.

2 Toby/Gabe/Jim/Dwight/X Is The Scranton Strangler

The Office first mentioned the serial killer known as the Scranton Strangler in the sixth season, launching the first wave of fan theories that continued well after the conclusion of the series. The Office further muddied waters when the convicted Strangler was claimed to be innocent by juror Toby Flenderson, who quickly became one of the likeliest suspects in numerous theories.

However, there are just as many plausible theories that characters like Gabe Lewis, Dwight Schrute, and even Jim Halpert were also likely suspects instead of George Howard Skub, who was incarcerated for the murders.

1 Dwight Is Actually The Real Main Character Of The Office

Whether it’s a fan theory or just a general observation of the series, there has been a lot of discussion about who is the real main character of The Office following the departure of Michael Scott in the seventh season. Jim and Pam seem like the obvious stars given the development of their relationship and the growth of their family.

However, it’s really Dwight Schrute’s overall drive to become manager and win the love of Angela that makes him the star, as they began their relationship even earlier than Jim and Pam despite a rockier road. Dwight’s final takeover of the Dunder Mifflin, while most of the staff left the office, seemingly proves a number of theories about The Office‘s main character.

NEXT: 5 Pokémon Fan Theories That Might Be True (& 5 That Were Debunked)


Next
Star Wars: Every Main Character’s Fate At The End Of The Clone Wars

Entertainment reporter, writer, and all-around geek, Scoot Allan has written for print and online media sources like Geek Magazine, GeekExchange, GrizzlyBomb, WhatCulture, RoguePlanet.tv and the Urban 30 before joining CBR, ScreenRant, GameRant and The Gamer as a staff writer. He enjoys salad but prefers french fries.

Marvel: 10 Heroes Who Have Made The World A Worst Place | CBR
Waterworld Sequel Series in Development From Dan Trachtenberg
Fantastic Four’s 60th Anniversary Issue Gets a John Romita Jr Wraparound Cover
Naruto: 10 Characters Who Would Make Powerful Jinchuriki | CBR
Why Robin Williams Quit His Role as Howard the Duck After Filming Started