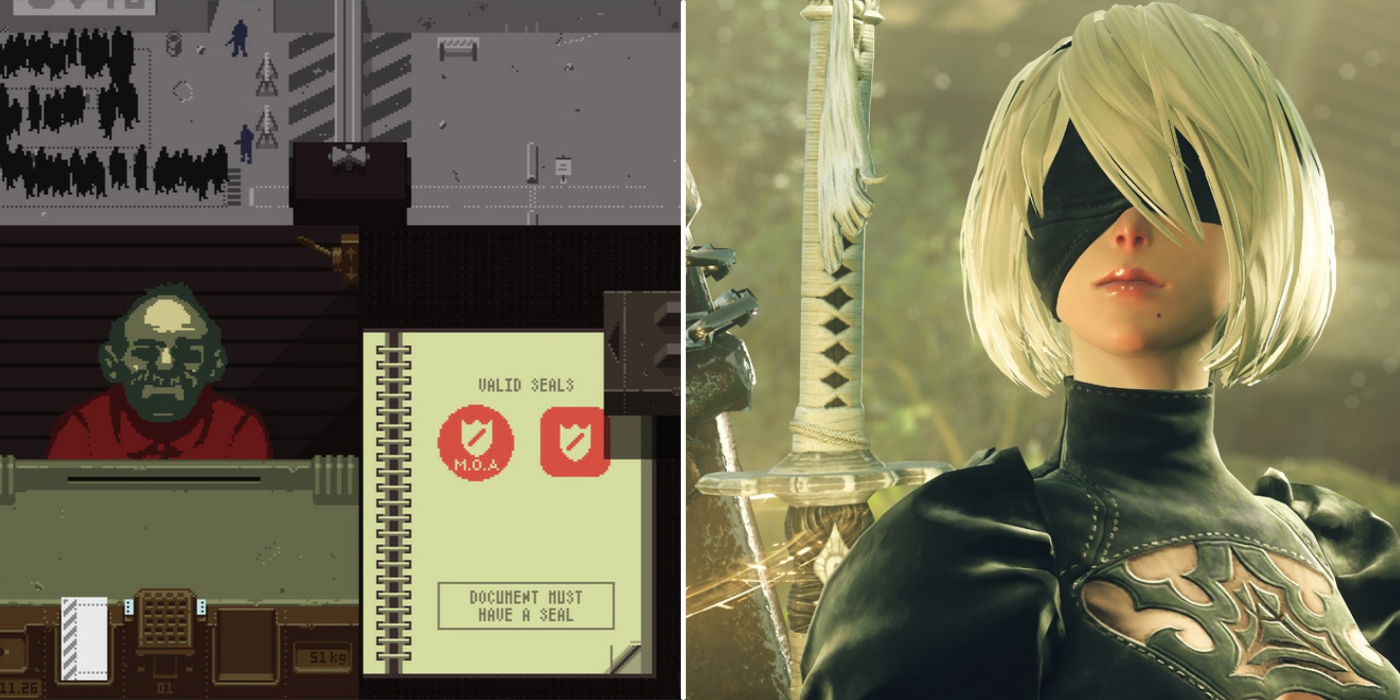 There are many choice-based games where the player’s choices result in a variety of endings. Some of these good, better, and best endings can be difficult to achieve, but worth the effort in the end.

RELATED: 10 Choice-Based Games That Will Break Your Heart

However, some games have the absolute worst endings possible, achieved by players in rather gruesome ways. From trying to kill peaceful robots and children in Nier: Automata to killing everyone and everything possible in games like Undertale and Westerado, these games are infamous for their bad endings — and what players must do to unlock them.

DRAMAtical Murder is a BL choice-based visual novel game where the player, as Aoba Seragaki, can choose from many possible romances. However, these romance routes can result in tragic endings if enough wrong choices are made. One of the worst endings happens in Clear’s route if the player tries to command Clear; to get the good ending, they must refuse to make any commands at all. The bad ending results in Clear being reprogrammed by main antagonist Toue into an obsessive monster who turns Aoba into a lifeless doll for his own amusement.

Undertale‘s infamous Genocide route demands that the main protagonist kill everyone they possibly can. Not only does this result in the deaths of fan favorite characters like Undyne, Sans, and Toriel, but it destroys the fabric of the game’s world. Playing the Genocide route first also changes the endings of the True Pacifist and Neutral routes. Players often make an effort to play through the True Pacifist and Neutral routes before playing the Genocide route, just to ensure they got the best endings possible before those endings were permanently altered.

8 Until Dawn’s Worst Ending Means That Everyone Dies

Until Dawn is a choice-based mystery game where some, all, or none of the characters survive depending on the player’s choices. The worst ending results in every single character dying brutally. How and when these characters die depends on the specific choices made during gameplay; for instance, giving one character a weapon over the other could lead to the latter character’s death.

Missing certain clues can also lead the deaths of others outside the currently-controlled character. In the worst ending, the credits roll alongside flashbacks of every character’s death in chronological order, with all the gory bits included.

7 The Bad Ending In The “Farewell, My Turnabout” Trial In Phoenix Wright: Ace Attorney – Justice For All Is Tragic

Phoenix Wright: Justice For All has a particularly bad ending during the “Farewell, My Turnabout” trial. This ending will occur if Wright presents an incorrect combination of evidence or answers the follow-up question with any option except “Engarde wanted blackmail on you.” Wright cannot support his claim about Matt Engarde’s guilt in the case, meaning Engarde is found not guilty. As a result, Wright flees in shame and never sets foot in a courtroom again, instead wandering the streets alone. Most fans agree that this is the worst ending possible for a Phoenix Wright game.

6 Your Family Can Starve To Death In Papers, Please

Papers, Please has multiple endings, and seventeen out of those twenty endings are fairly bad ones. However, none are as painful as the one where the player’s entire family succumbs to starvation because they couldn’t make enough money at their job to provide for them.

RELATED: Bioshock & 9 Other Gritty Dystopian Games That Get Surprisingly Dark

If the player fails to earn enough money to keep themselves and their family alive, the gameplay will end with a statement about the untimely deaths of their loved ones. This makes players desperate to keep their family as intact as possible during gameplay, enough to take bribes despite the risk of being caught by their employer.

In the Wild West-themed mystery-thriller Westerado, the player must track down the villain who killed their family. There are multiple endings, depending on which of the procedurally-generated suspects committed the crime and what choices the player makes. However, one ending is easily the worst of all: the Horde ending.

This ending results in the player killing almost anyone and everyone, as well as possibly destroying the world that they’re in. Most players tend to avoid this ending if they can, considering that killing everyone technically isn’t the point of the game.

In Fire Emblem: Three Houses, the player aligns themselves with one of the titular houses: Black Eagles, Golden Deer, or Blue Lions. Depending on which house the player teaches, they automatically access one main route to play through: Crimson Flower for Black Eagles, Verdant Wind for Golden Deer, and Azure Moon for Blue Lions. However, there is a secret fourth route, Silver Snow. This route only unlocks if the player chooses to teach the Black Eagles before siding with Rhea — and against Edelgard — before the time skip.

Fans were horrified to find that this route later led to both Edelgard and Dimitri’s deaths, and the fate of Claude, the leader of Golden Deer, is left unknown, even though he usually survives in the other three routes. This outcome led to fans claiming that Silver Snow’s route contained one of the worst possible main endings due to none of the three main house leaders surviving the game.

3  The Dark Pictures: Man Of Medan Has Multiple Ways To Kill Off Its Cast

The Dark Pictures: Man Of Medan is another game where all of the characters can die depending on choices the player makes. One of the bad endings can even result in the characters being arrested by the government if not killed by them for security-related reasons.

However, one of the worst endings is where none of the characters get rescued and their ship is stranded in the middle of the ocean, leaving the player to realize that they’re going to die with no hope of rescue.

2 Ending R: Mave[R]Ick In Nier: Automata Is The The Most Heartless

There are multiple endings in Nier: Automata, many of them bad. However, Ending R, Mave[R]Ick, is considered by fans to be the most heartless and one of the worst endings. This ending can be achieved in two ways: the player must either attack the robots peacefully by Pascal’s side during Chapter 14 or attack both Pascal and the children. Most players try to avoid this outcome and will only try to achieve this ending for the sake of full completion.

1 In Heavy Rain’s Worst Ending, The Origami Killer Gets Away With Murder

In Heavy Rain, one of the possible endings lets the Origami Killer get away with murder through the player’s incompetence. This particular ending, called Helpless, is difficult to achieve since it requires failures in multiple prior chapters, but it’s still possible for players to accomplish. Not only does the Origami Killer get away scot-free, but Ethan ends up in prison after being framed as the killer. Tortured by the loss of his son and unable to bear any more suffering, he hangs himself in his jail cell. This was an ending that players found to be one of the saddest in the entire game, and most did all they could to avoid it.

NEXT: 10 Best Anime Endings Of The Decade, Ranked


Next
The 10 Most Powerful LGBTQ Video Game Characters

Claris Lam is an avid anime fan, gamer, reader, and writer based in Canada. In her free time, she catches up with the latest anime episodes and reads many light novels and manga. Her writing has been featured on The Blank Page, UWImprint, and more. You can follow her at ClarisYLam on Twitter to see more of her work.