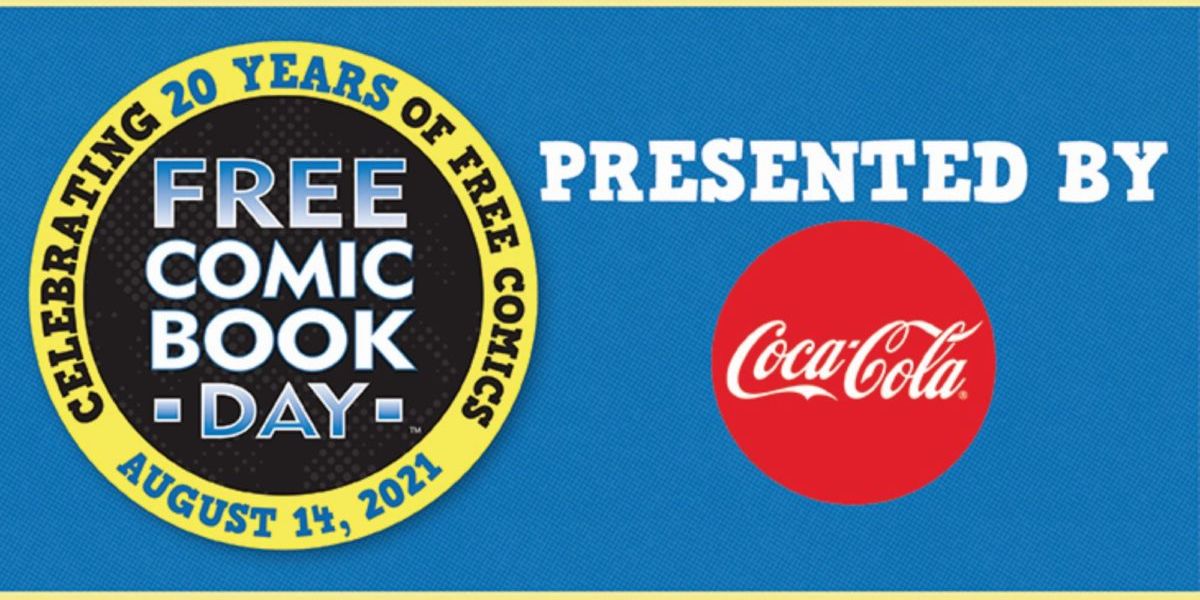 This year’s Free Comic Book Day will be getting a boost from Coca-Cola, which will sponsor the annual celebration to commemorate its 20th anniversary.

The partnership with the beverage giant was announced on FreeComicBookDay.com, along with a sponsorship by PREVIEWSworld Pullbox, the online ordering tool of Diamond Comic Distributors. As the presenting sponsor, Coca-Cola will have its brand displayed on promotional materials and merchandise that will be circulated to comic book shops in preparation for the event. Having just launched earlier this month, Pullbox provides customers with an online platform to manage their comic subscriptions and preorders from their local shop.

Scheduled for Aug. 14, the highly-anticipated jubilee will include a “specially designed anniversary logo and commemorative artwork” from Skottie Young, whose “one-of-a-kind design” champions the “power of imagination and the endless possibilities of comic storytelling.” Young’s design will emblazon the official posters and T-shirts of FCBD 2021, which will be available for purchase at participating locations.

To bolster interest in the summertime celebration, organizers of FCBD 2021 have also initiated the #FindYourStory social media campaign, which “encourages readers to explore new worlds, revisit their favorites, and discover new destinations in the pages of a comic book.” Employing exclusively designed virtual posters that feature various comic book settings, the campaign is aiming to inspire fans to “share their all-time favorite and newly discovered comic book destinations on social media and use the hashtag, #FindYourStory.”

Several leading comic book publishers are planning to release titles specifically for the occasion, most notably DC and Marvel. Batman and King Shark will see their own commemorative editions from DC, while Marvel is set to unveil new offerings featuring Hulk, the Avengers, Venom and Spider-Man. Marvel has revealed that the storylines of its two special editions will be relevant to a number of volumes that have yet to be released, and that they will serve as prologues for “exciting new eras” for the Marvel characters.

Publisher of the monthly catalog Previews, Diamond has been coordinating the yearly promotion since its inaugural event in 2002. Having since been picked up in Canada and Australia, as well as countries in Europe and Asia, the premier FCBD was held on May 4, 2002. Timed to coincide with the release of the feature film, Spider-Man, the event was conceived by Joe Field of Flying Colors Comics in Concord, Calif. Since then, organizers have typically scheduled the special day to occur in May alongside other high-profile comic book movie releases, such as Iron Man in 2008 and Thor in 2011. Having spread out the promotion over two months last year due to the disruption caused by COVID-19, this year’s FCBD was pushed back to August to allow for the further loosening of restrictions associated with the pandemic.

When Larry studied film and television, he hid a comic book in whatever reading material he’d been assigned. When he performed stand-up comedy, he envisioned himself a true superhero, bringing hope and joy to the people. Now, writing for CBR, Larry can stop pretending. He hasn’t gotten over the fact that he’s not Batman but he is proud to be what he really is: a geek.

The Sandman’s First Published Artwork Is Headed to the Auction Block
Jukebox Musicals: 10 Best Movie Musicals That Use All Existing Songs
One-Punch Man: 10 Anime Characters Who Would Be A Perfect Match For Saitama
Exorcist Franchise Relaunching as a Trilogy at Blumhouse | CBR
Bob Odenkirk Hospitalized After Collapsing on Better Call Saul Set