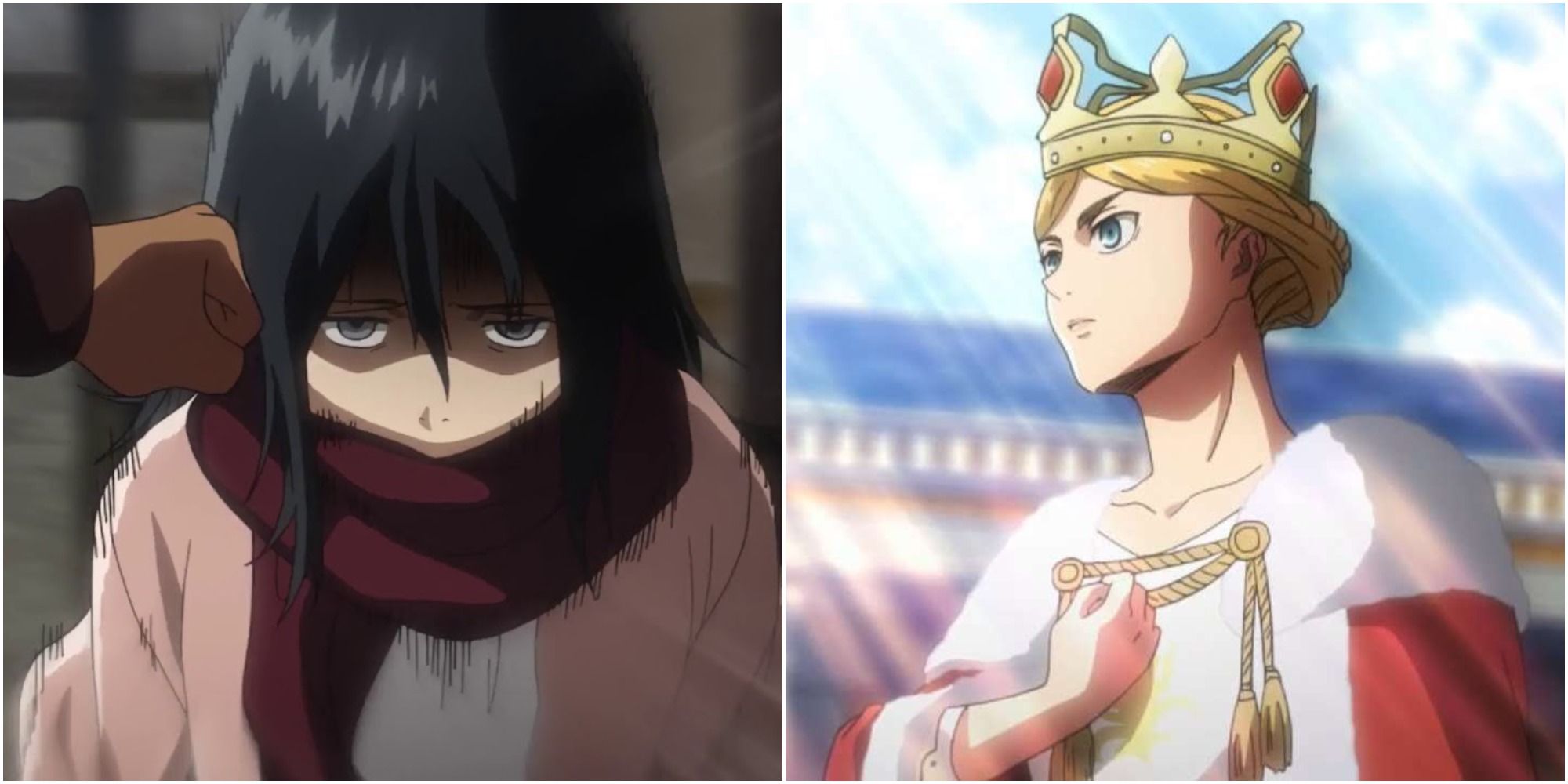 In Attack on Titan, the focus is not on the titular villains as much as on its innumerable characters and their interrelationships. Eren’s protagonism is often downplayed in favor of Levi’s combat mastery, Armin’s tactical acumen, or Hange’s scientific enterprises.

That said, none of the main characters in Attack on Titan are flattened into a single universal trait, which is what makes the story both relatable and credible. Although several of them have strong preferences in terms of moral or political choice, there are others who try to maintain a balance between their ambitions and what’s best for the world at large.

10 Eren Kruger Plays The Villain To Be The Hero

Eren Kruger, the man who saves Grisha Yeager’s life after a failed “revolution,” initially displays his brutality and contempt for the Eldian people. He is even shown to be expressionless when he discovers what the Marleyan soldiers did to Fay, the younger Yeager.

However, it is only when he hands over the Attack Titan to Grisha that he reveal his double-agent status. Unfortunately, this is where Eren Kruger meets his end, but at least he is remembered through the protagonist’s name.

9 Hange’s Rational Genius Is Balanced By Their Empathy

Hange is no doubt one of the sharpest minds in Paradis, potentially even the world at large. Their intelligence is geared towards science and research, producing incredible techniques and weapons with which to fend off Titans.

On the other hand, it’s interesting how they fawn their test subjects, Bean and Sawney, as if they are wayward children. In fact, Hange has been overly emotional when either of their “pet” Titans is subjected to agony, not to mention Hange is especially distressed when Bean and Sawney are killed (by the Female Titan).

Krista Lenz is a submissive, gentle, and polite person without a clear idea of how to behave in social situations. This can be attributed to her younger days when she is kept away from society in order to protect Rod Reiss’ so-called legacy.

RELATED: Attack On Titan: 10 Characters Who Never Lived Up To Their Potential

Her previously overpowering insecurities fade away as she morphs into a powerful ruler, being officially crowned as the Queen of the Walls (technically the island of Paradis). In this role, Historia establishes herself as a force to be reckoned with.

7 Pieck Finger Is Whimsical But Dependable

Pieck Finger is the exact opposite of how she appears as the Cart Titan—tender, compassionate, and extremely dedicated (to her friends as well as her mission).

The Marleyan military casts little doubt as to her loyalties, relying on her last-minute decisions to save the day, and they often do. This feature of Pieck’s starkly contrasts with her bizarre actions, like when she gets Colt tipsy, or when she runs like a quadruped even when she’s in her human form.

6 Erwin Is Unflappable In The Literal Jaws Of Danger

Erwin Smith’s motives are far too convoluted to be translated effectively, and it’s probably that Hange and Levi are the only ones who truly understand him. Further, his unflappable attitude is, in part, the reason for his success as the Scouts Regiment Commander.

This is best observed when he exhorts the Scouts to carry out their respective tasks in the literal process of being carried away in a Titan’s mouth. Erwin doesn’t falter in the face of terror because he is completely confident in himself and his subordinates.

5 Armin’s Strength Shines Through His Authority

Armin is constantly bullied as a child, usually by bigger kids who see his interest in the outside world as a form of blasphemy. These occurrences, as well as the need to depend on Mikasa and Eren for protection, make him a rather timid character.

That said, Armin burns bright when given a chance at authority, as seen through his stint under Dot Pyxis, where he develops a sense of self-worth for the first time. This new personality is nothing short of a metamorphosis, transforming Armin into a capable and caring leader.

Dot Pyxis is a slightly wacky character, having been heard to fantasize about being consumed by “a stunning beauty” of a Titan. But it is his cool and tranquil disposition that allows him to make complex decisions regardless of how dire the situation around him is, or how quickly it is devolving.

Pyxis hasn’t made many mistakes in his military career, and his successes (such as the Royal Government coup) change the political course of Paradis forever.

3 Kenny Ackermann Is Not As Cold As He Appears

Kenny Ackerman is the chief of the Anti-Personnel Control Squad, a job he seems to relish for how savage and violent it usually is. He also makes extremely eccentric choices when he has the power to, like trying to get Historia and Eren to battle it out (fully aware that the two teenagers hold the fate of Paradis in their hands).

For all his problematic actions, Kenny does care for a few people: his sister, Kuchel, being a prime example. He even takes care of Levi for a few years, although he does abandon him in the end.

Annie Leonhart is one of the bravest of the Nine Titans, but there have been several instances in which she chooses to take a passive perspective. She protects herself in Titan crystal so she wouldn’t be interrogated by the Scouts, not to mention basically walking away from the final battle due to her fears.

RELATED: Attack On Titan: Every Arc, Ranked By Death Count

However, Annie’s terror is dispelled on watching the youngest generation of Marleyan Eldians, Gabi and Falco, do their best to save the world from Eren’s wrath. She ultimately returns to help save the day.

In some ways, Mikasa’s unyielding determination to protect Eren resembles the internal focus present in those experienced in Zen meditation. Her goals are so perfectly aligned with her dreams that she rarely displays doubt in her judgments.

In comparison, Eren is a seething pot of anger, unable to achieve the emotional balance he so clearly needs. This is what makes his pairing with Mikasa so interesting—she is the stubborn, immovable object to his reckless, unstoppable force.

NEXT: Attack On Titan: The Best Things Every Hero Did, Ranked

Ajay’s natural habitat is his bedroom, which means that his time is spent staring at his TV screen in a hypnotic coma. He tends to rant about the lack of quality programming in his life — but the amount of content he consumes would make even Galactus gassy.

Restaurant to Another World Releases Heartwarming New Teaser Trailer & Key Visual!
10 Anime Characters Who Went Above And Beyond For Their Siblings
The Witcher 3: The 5 Best Side-Quests | CBR
Superman ’78 #1 Preview Furthers the Adventures of Christopher Reeve’s Man of Steel
8 Comics To Read If You Loved Smallville | CBR