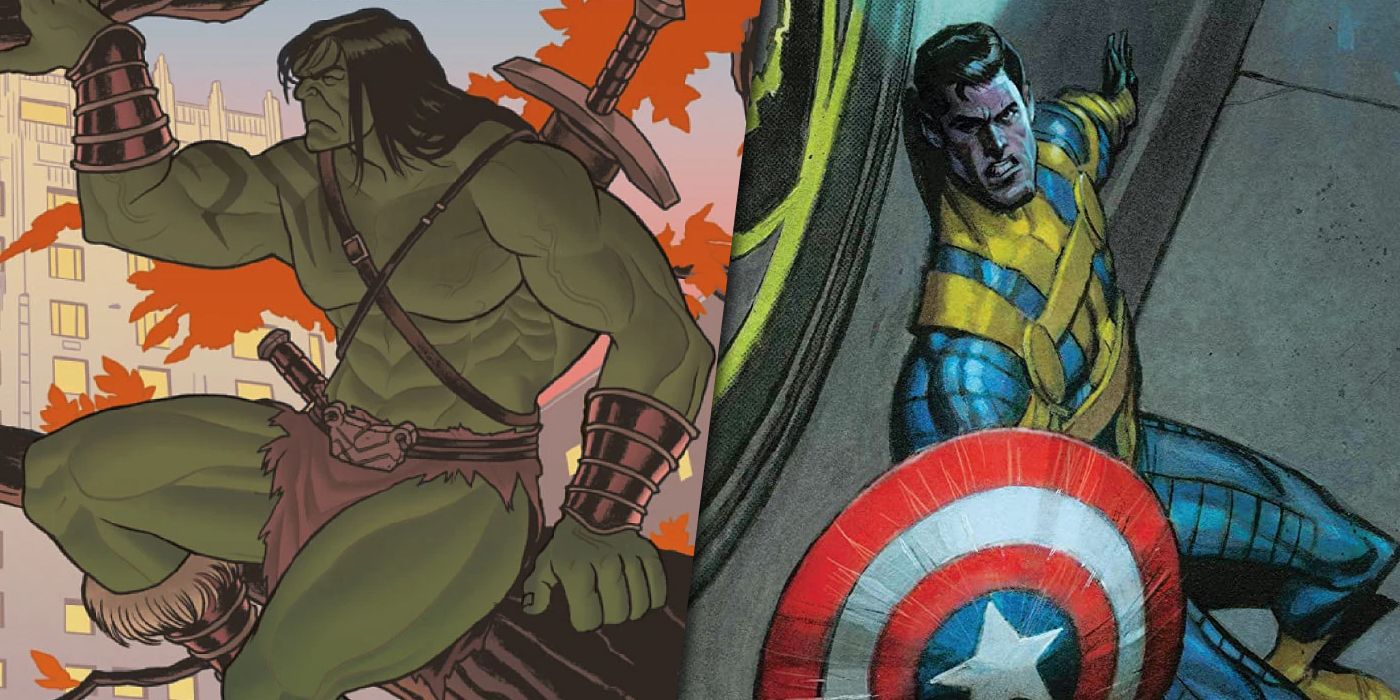 The Marvel Universe has been telling ongoing and related stories in an untouched continuity that exists on a sliding timescale for over 80 years, which has resulted in the continued growth and development of popular characters that can sometimes even include parenthood with the arrival of soon-to-be superhero children.

And while there are a few heroes that have carved their own paths as heroes and sometimes villains, there are a number of sometimes unknown characters like Skaar and Son of Hulk who followed in their parents’ footsteps over the years to carry on a superhero legacy that we’ll explore a bit further today.

After Hulk was exiled from Earth by the Illuminati during the Planet Hulk storyline, he rose through a gladiator arena and led a rebellion to take control of the planet of Sakaar where he found love with a warrior named Caiera before the planet was destroyed. Hulk survived, though his new wife sacrificed herself to save her twin sons, Skaar and Hiro-Kala.

Skaar traveled to Earth where he found a new home in the Savage Land and briefly worked with a team of Dark Avengers. His twin brother Hiro-Kala didn’t gain the strength of the Hulk initially and sought out a way to tap into his mother’s Old Power which eventually saw him gain a New Power by combining it with Galactus’ Power Cosmic as he attempted to find a new Sakaarian home.

9 Ahura Boltagon Is The Powerful Son Of Black Bolt & Medusa

Black Bolt and Medusa are the leaders of the Royal Family and the hidden race of powerful Inhumans, whose genetic development was both strictly enforced and enhanced by Terrigen Crystals that transformed the populace when they reached a certain age.

Ahura Boltagon was exposed to the Terrigenesis process after already developing some powers, which further increased his abilities. Ahura briefly suffered from the same madness that affected his uncle Maximus, though he recovered and joined the Future Foundation with other gifted youth.

8 Ian Rogers Was Raised By Captain America To Become Nomad

Steve Rogers/Captain America was trapped by his enemy Arnim Zola in Dimension Z for years where he first encountered young Leopold Zola. Leopold was the artificially created son of the robotic Zola, who was fired as an infant and raised by Captain America, who named him Ian Rogers.

While Captain America returned to Earth after he thought Ian had been killed, the young Rogers had actually grown up under the supervision of Rogers’ love Sharon Carter. Ian Rogers returned as the newest Nomad and began working alongside Sam Wilson’s Captain America before he found himself lost in the multiverse.

Captain Mar-Vell was a Kree soldier who fell in love with the people of Earth and chose to become the first Captain Marvel, inspiring a number of heroes and making lasting friendships before he tragically succumbed to cancer. Mar-Vell had found love with a Titan named Elysium, who created a son using Mar-Vell’s genetics that she named Genis-Vell and artificially aged to maturity.

Genis took on a few superhero names including Legacy and his father’s Captain Marvel before moving to Photon. Genis-Vell’s instability from his cosmic awareness saw him destroy and recreate reality at one point, which resulted in the birth of his sister Phyla-Vell in the same process that created him.

6 X-23, Daken And The Multiversal Jimmy Hudson Are Wolverine’s Kids

Wolverine has lived a long time, thanks to his mutant healing factor that repairs his body and slows his aging, which has led to a number of relationships in his long life that produced quite a few offspring over the years. Laura Kinney was created using the genetic material from Logan and raised as the weapon known as X-23 before she took over as the All-New Wolverine.

Daken was the natural child of Logan and his murdered wife Itsu who was raised in secret hating his father to become a bitter enemy until his rebirth on Krakoa. Jimmy Hudson was the son of the Ultimate reality’s version of Wolverine, who was transported to the 616 reality before he was transformed into an alien Poison and disappeared.

5 Kevin Masterson Followed In His Father’s Footsteps As Thunderstrike

Eric Masterson was chosen to fill in for Thor for a short period of time in the 90s that resulted in Odin granting him his own enchanted mace to become the powerful Thunderstrike, though he sacrificed himself during a final battle with Bloodaxe and the Egyptian Serpent God of Death, Seth.

His son Kevin Masterson received his father’s enchanted mace from Captain America and unlocked his own transformation into a new version of Thunderstrike. Masterson hasn’t appeared often as Thunderstrike, though he did join with Angela’s Asgardians of the Galaxy.

While the mainstream version of Spider-Man has never actually had a child, Peter and Mary Jane came close in the 90s during the Clone Saga, though the baby was controversially lost during childbirth in the climax of the storyline. Thankfully, alternate reality futures were explored where Peter and MJ’s child grew up to become their own superpowered hero.

May “Mayday” Parker wore her uncle Ben Reilly’s costume as Spider-Girl and later Spider-Woman in the MC2 future, and Anna-May “Annie” Parker fought crime alongside her parents as Spiderling in the Renew Your Vows reality. They then worked together during the Spider-Geddon event and gave Peter Parker a possible glimpse into the future for him and MJ.

While the character was first teased in a non-canon appearance from X-Men: Millenial Visions, Talia Josephine “TJ” Wagner/Nocturne later appeared as a member of the multiversal team known as the Exiles that were tasked with fixing broken timelines. Nocturne’s parents in her home reality were alternate versions of Nightcrawler and Scarlet Witch who had fallen in love.

This led to TJ growing up alongside her father’s X-Men before she joined the Exiles. Nocturne’s heritage resulted in her blue-skinned appearance as well as her blended abilities that allowed her to possess others while also firing concussive hex-bolts from her father’s Brimstone Dimension.

Danielle exhibited unspecified powers early as an infant during the Secret Invasion storyline, though a future version of the character appeared that had inherited her parent’s abilities along with the shield of Captain America to become the new Sentinel of Liberty.

1 Speed & Wiccan Are The Reincarnated Twins Of Scarlet Witch & Vision

Wanda Maximoff and the synthezoid known as The Vision fell in love during their time on the Avengers and were married, which ultimately resulted in the birth of their twin boys Thomas and William thanks to Wanda’s magic and pilfered pieces of Mephisto’s soul that the demon eventually reclaimed.

The souls of Wanda and Vision’s twin boys were eventually reincarnated as Billy Kaplan and Tommy Shepherd, who became the Young Avengers known as Wiccan and Speed, respectively. The young heroes took after their mother and uncle and shared similar powers, though they only discovered their true lineage after they became costumed heroes.

NEXT: 10 Children Who Are More Powerful Than Their Superhero Parents


Next
10 Ways Naruto Ruined His Likability

Entertainment reporter, writer, and all-around geek, Scoot Allan has written for print and online media sources like Geek Magazine, GeekExchange, GrizzlyBomb, WhatCulture, RoguePlanet.tv and the Urban 30 before joining CBR, ScreenRant, GameRant and The Gamer as a staff writer. He enjoys salad but prefers french fries.

Mob Psycho 100: Will Season 3 Ever Happen? | CBR
The 2nd-Best-Selling Console Of Each Generation (& How It Could’ve Been #1)
Knockout City Season 2: What Players Can Expect | CBR
Blood Red Sky, Netflix’s ‘Vampires on a Plane,’ May Be a Sleeper Hit
Marvel: The Most Powerful Characters Not Yet Seen In The MCU