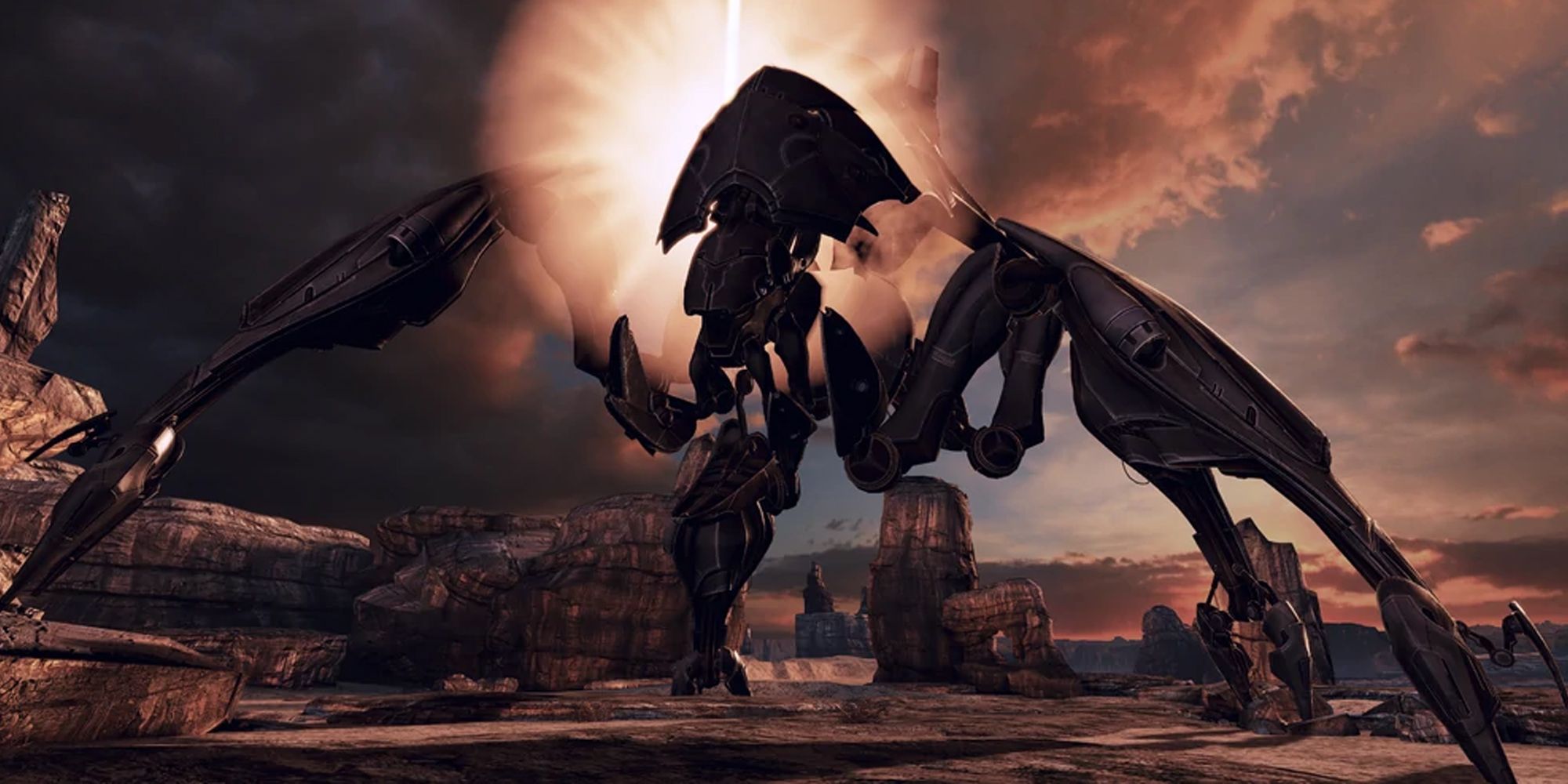 In Mass Effect 2, Commander Shepard could either discourage the Quarians from mounting an attack against the Geth or encourage them to fight and take their home back. Regardless of Shepard’s recommendation, the Quarians launched a full-scale attack on the Geth in an effort to reclaim Rannoch. When the Reapers arrived in Mass Effect 3, the Quarians were nowhere to be found until they reached out to Admiral Hackett and the Alliance for aid.

When Shepard met with the Quarian Admirals, the absolute chaos they discovered in the Perseus Veil was more disturbing than expected. The Geth, regardless of whether Shepard rewrote the Heretics, allied themselves with the Reapers because they feared extinction, and the Reapers gave them major upgrades to ensure their victory against the Quarians. Even after disabling the signal on the Geth Dreadnought, the Reaper Base on Rannoch had to be infiltrated so the Normandy could target and destroy it from orbit to break the hold the Reapers had over the Geth. It fell to Shepard to save both the Geth and the Quarians — but doing so wasn’t easy, and, in some cases, not even possible.

Mission: Infiltrate the Reaper Base

To launch this mission, players must complete either the side mission “Rannoch: Admiral Koris” or “Rannoch: Geth Fighter Squadrons.” It’s not necessary to complete both, but the incomplete mission will no longer be available once the mission to take back Rannoch starts. If Tali’Zorah is still alive, she is a required squadmate, but if she is not, Admiral Xen will act as outside support over the comms and Shepard can choose both squadmates without restrictions. If Legion is still alive, it will accompany the squad, working ahead of them to disable certain functions in the base. If Legion was given to Cerberus or did not survive the suicide missions, it will be replaced by Geth VI.

Legion/Geth VI drops out of the shuttle to scout ahead, and when Shepard and squad land, there is a cutscene with Tali where some morality points can be earned while she basks in the glory of her homeworld for the first time in her life. After Shepard hands her a piece of stone from Rannoch to carry with her always, the squad heads toward the base, where they are instantly met with Geth hostiles. The first Geth can be taken out from the ridge before descending into the valley and toward the base. A second wave of Geth begins attacking, and once they’ve been eliminated, the blast doors leading into the base close, and three more Geth drop into the fray.

After dispatching them, grab the SMG High Caliber Barrel upgrade on the right of the blast doors. Then, climb up the tubes to take out the Geth on the platform above. The wave of Geth up here includes Rocket Troopers and Troopers. After eliminating them, pick up the Assault Rifle Piercing Mod and the Kassa Fabrication Gauntlets before climbing up to the next level. After taking out the patrol below, eight Rocket Troopers drop into the fight in packs of four. Destroy them and head toward the doors, salvaging the Reaper Tech along the way for 10,000 credits, then heading up the ramp.

As a blast shield closes over the signal, come to a crossroads in the path. Head left to pick up the SMG Ultralight Materials and then return to the right and battle through multiple waves of hostile Geth, which can include up to 18 Troopers to reach the Assault Rifle Stability Damper. When they are eliminated, pick up the Geth Plasma Shotgun and salvage the nearby data for 5,000 credits.

Related: Mass Effect 3: How to Save the Council from the Cerberus Attack

Take the elevator to the next platform, but prepare for another big fight. Three Geth Primes guard the area Shepard needs to reach. There is a Geth Spitfire on the floor, so pick it up and use it to eliminate the Primes more quickly. Using tech abilities like Sabotage will help take down their shields before turning the Spitfire on them. After they have been destroyed, proceed to the nav-point on the screen to set up the targeting laser that will destroy the base.

Activating the laser is a simple matter of holding down the trigger to help narrow in on the point so the Normandy can hit from orbit. Make sure to keep Shepard out of the blast zone radius, otherwise they will be killed when the bomb is deployed. Once it is deployed, the explosion will knock Shepard and their squad from the ramp they were on just as a massive Reaper begins to ascend from the blast hole.

In the cutscene that follows, Legion has secured transport and Shepard and crew race to reach the vehicle, but seeing the Reaper and knowing the destruction it will cause, Shepard refuses to just run away. Instructing everyone else to step back, they stay behind to face the Reaper.

Using the targeting laser, Shepard needs to line up the target and signal the Normandy to fire on it while the Reaper’s opening to fire its own laser. Taking too long to fire on the Reaper could result in losing both the Geth and the Quarians, prompting the Game Over screen and forcing a restart. After hitting the Reaper the first time, it will turn its attention and its beam on Shepard. This means dodging left or right to avoid its path while lining up the targeting laser to damage it.

Shepard will need to dodge and strike the Reaper three times with the laser before triggering a final, more powerful laser strike that gathers power from both the Normandy and the Quarian Flotilla ships combined. This blast destroys the Reaper, but not before it can taunt Shepard, speaking about Harbinger and promising futility, despair and ultimate defeat.

There is a morality opportunity for conversation here, with a Paragon Shepard firmly stating that Organics can win. Renegade Shepard will brutally promise Reaper defeat before taking one last targeted shot at the defeated Reaper. There is also a non-morality-based option to ask the Reaper to help Organics understand what they want.

Mission: Saving the Quarians and the Geth (or Not)

In the aftermath, the Geth have been weakened and temporarily disabled, which prompts the Quarians to start plotting their next move. Legion/Geth VI will argue with Tali about not wanting the destruction of its people, and when it proposes uploading the Reaper Code to the Collective, Tali is terrified of the implications. There is a very high morality check to follow when Shepard intervenes that can save the Geth, the Quarians or both.

If Shepard allows Legion/Geth VI to upload the Reaper Code without a high enough morality score and they attempt to rally or warn the fleet, the rally will fail. The newly upgraded Geth will wipe out the Quarians, resulting in Tali’s suicide and Legion’s sacrifice to upload the code. If Shepard’s Paragon/Renegade score is high enough here, the force of their argument will convince the Quarians to back off, ceasing the threat against the Geth and fostering a new era of peace that will help both races grow and coexist together on Rannoch.

In the event that Shepard does not allow Legion/Geth VI to upload the code, it will resist and turn on them, forcing Shepard and Tali to fight and kill it through a sequence of Renegade interrupts. Regardless of Shepard’s choice, Legion will die, either through self-sacrifice or at Shepard’s hand.

Artist, writer, avid gamer, lover of comics, manga and anime and all around nerd, Jennifer has been creating online content for numerous websites for over 15 years. She can generally be found on Tuesday nights playing Drow Warlock Zaelien Vel’rai in the So Many Levels D&D campaign on Twitch!