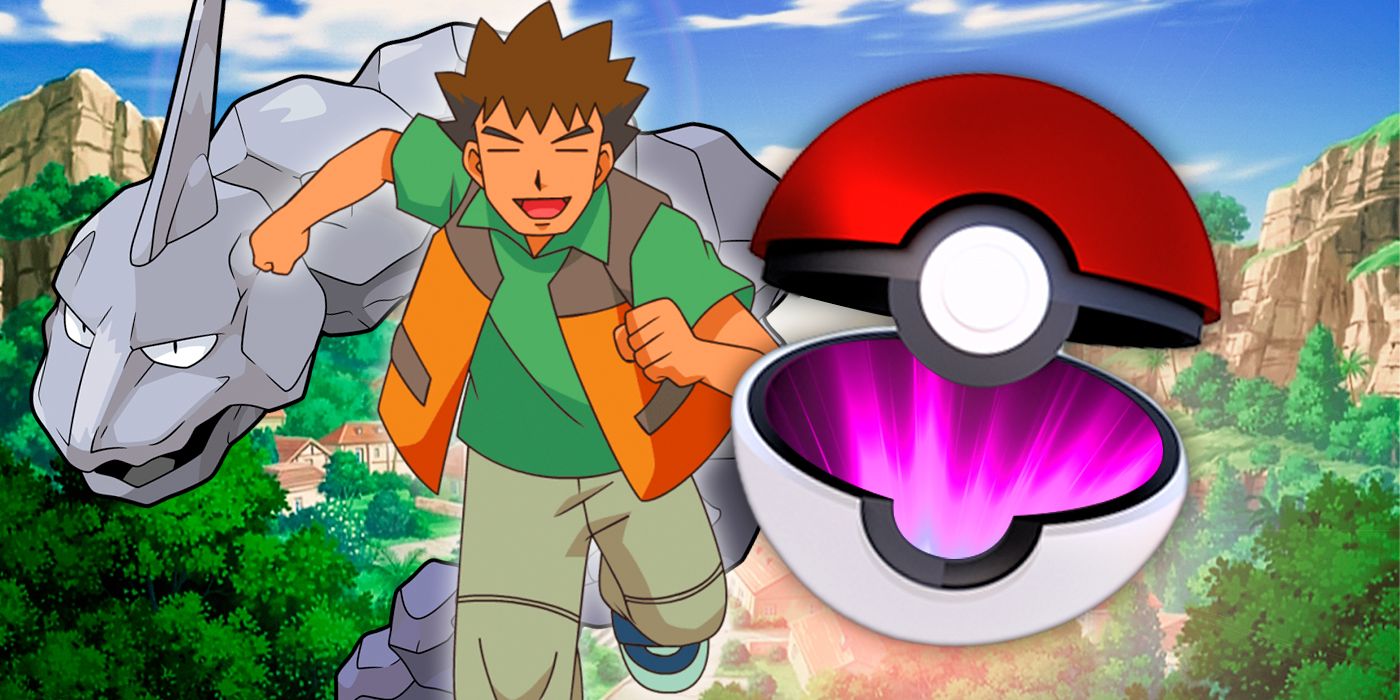 During his long tenure on the Pokémon anime, Brock has had a history of collecting tough, rugged Pokémon. From Onix and Geodude to Sudowoodo and Croagunk, his Pokémon have always been strong and reliable fighters. However, the title of Brock’s strongest Pokémon actually goes to his cutest one. Hatched from an egg, his Happiny puts the rest of his Pokémon to shame with its outrageous strength.

Brock’s Happiny is an absolute unit. Apparently possessing the strength of 10,000 men, one of the first things it did after hatching was literally bench press its trainer before tossing him hundreds of feet into the air. Brock’s Onix, now evolved into a Steelix, might be his signature Pokémon in Gym battles, but can it lift an entire frozen lake? Happiny can.

When Happiny isn’t tossing several tons of ice over a cliff, it uses its Bewear-like strength for various purposes. When Ash’s Grotle, a Pokémon that weighs 213lbs, was too tired to walk, Happiny effortlessly carried it over its head with just one hand. When the group was helping in the construction of a bridge, Happiny was able to carry more stone blocks with one hand than a Machamp could manage with four.

Surely this means anyone playing the games could beat them with just Happiny, right? Considering all forms of matter are little more than paperweights to the tiny pink powerhouse, one of these adorable monsters should be unstoppable. Ironically, Happiny is actually tied for the lowest base Attack stat, 5, of all Pokémon. The even greater irony is that it is tied with Chansey, its evolved form.

Happiny’s final evolutionary stage, Blissey, has a reputation for being a tank in competitive battling. With its HP capable of topping out at over 700, this Pokémon can take a hit or two. Despite that, it’s not a heavy hitter, having a pretty low Attack stat. So, the strength displayed by Brock’s Happiny doesn’t appear to be related to its species. As Pokémon does frequently, Happiny’s strength is an anime-only trait.

Not to say that Happiny is simply a gimmick, as it saved the day more than a few times. It once saved Brock and another trainer from falling off a bridge by grabbing Brock and tossing them both to the other side of the ravine. The former Gym Leader frequently uses Happiny to catch people and/or Pokémon that are plummeting to the ground, usually as a result of a Team Rocket encounter.

RELATED: At What Point Does a Pokémon Trainer Become a Master?

Happiny’s tremendous physical strength is most likely just a way to make it more interesting, considering it was crucial to Brock’s character development. Once it evolves into a Chansey, a Pokémon that is iconic for its role as Nurse Joy’s helper, it assists Brock in caring for a number of sick Pokémon. This event was the catalyst that pushed Brock toward ending his adventures with Ash in order to become a Pokémon doctor.

The Pokémon anime will always play by its own rules, rather than the rules established by the games. While in some cases this may be bothersome, Happiny’s super strength is delightful enough to be worth the absence of logic. After all, the games don’t have to go the extra mile to give individual Pokémon distinct personalities. Credit where it’s due for Pokémon giving Brock’s Happiny the strength to even carry the show.

KEEP READING: Pokemon: Ash Should Have Won the Sinnoh League

One Piece: Two Supernovas Are Gearing up Against Big Mom – but Can They Beat Her?
Related Topics

Ryan is an avid fan of the movie and entertainment industry, especially interested in the creation of content. Some people need a white noise machine to relax at night, Ryan needs an audio commentary. Making a living by simply talking about the movies and shows he loves is his dream. You can find him complaining about Rise of Skywalker on Twitter as @RickeySpanish because even his Twitter handle is an American Dad reference.