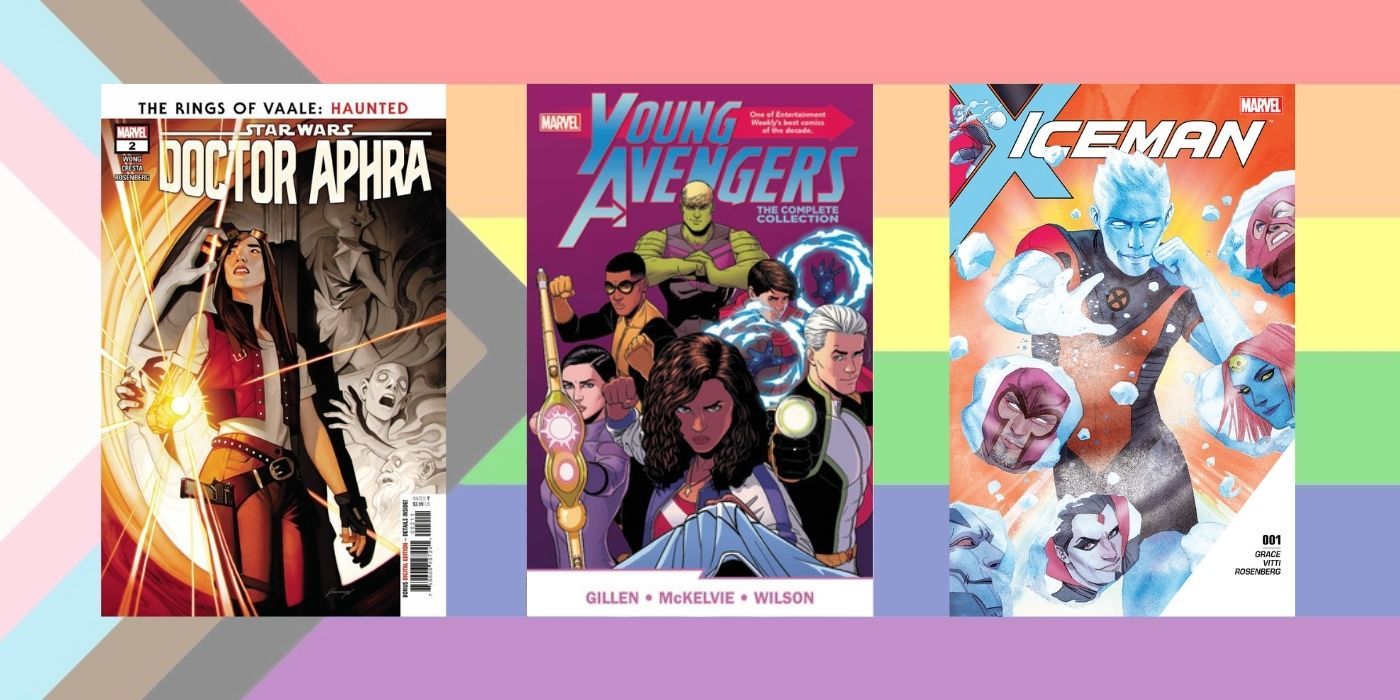 Marvel Comics rose to prominence because it had a sense of realism to it that fans immediately connected with. Stories were not set in fictional cities like Metropolis or Gotham but took place in New York. Likewise, Marvel’s heroes were rooted in the events of the real world. And with time, this led to increased representation of different marginalized groups.

RELATED: 10 Non-Superhero LGBTQIA+ Comics to Celebrate Pride All Year Round

Admittedly, it took a while for the company to take a stand and show meaningful LGBTQ+ representation. But over the years, more and more queer heroes have appeared at the forefront of major Marvel comics.

There have been numerous runs of Young Avengers, and all of them have been queer-inclusive. The original Young Avengers series by Allan Heinberg and Jim Cheung came out in 2005 and introduced two openly gay characters, Wiccan and Hulkling. It remains one of the greatest Avengers stories ever published.

The 2013 Young Avengers series by Kieron Gillen, Jamie McKelvie, and Mike Norton added such young heroes as America Chavez, Noh-Varr, and Prodigy to the team’s roster while exploring different facets of gender and sexuality. It is also pure fun with some of the most innovative uses of art in storytelling that can be found in any comic.

9 The Runaways Had Teenaged Lesbian Heroes

Like with the Young Avengers, Runaways was a series designed to focus on a team of teenaged heroes that included LGBTQ+ characters front and center.

The original Runaways series was written by Brian K. Vaughan and drawn by Adrian Alophona, and its first issue was released in 2003. Vaughan has made his commitment to diversity and allyship core to his writing, and so he included the character Karolina Dean as a lesbian. Sadly, representation was pretty limited in 2003 and this was initially only hinted at. However, Karolina would later enter into a same-sex relationship with her teammate Nico. While modern readers might not think much of this, it was a huge deal at the time.

8 Return Of The Valkyries Shows That Love Never Dies

In Norse religious traditions, Valkyries walk the battlefields and select the fallen warriors, designating half of them to go to Odin’s hall of Valhalla and the other half to Freyja’s hall of Folkvangr. Their name means Choosers of the Slain.

Marvel’s Valkyries were wiped out during The War of the Realms. However, the series Return of the Valkyries was about them coming back. One of these divine warrior women is a new character, Runa, who still dreams of the woman she loved in ages past.

Kitty Pryde is one of the most beloved characters among X-Men fans. Her creator, Chris Claremont, always intended for Kitty to be queer. Unfortunately, Marvel was prone to the same censorship and queer erasure commonplace in the past, so Claremont was forced to use queercoding rather than explicit references to her sexuality.

At long last, Kitty has gotten her due! In Marauders #12 by Gerry Duggan and Matteo Lolli, Kitty (now going by Kate) got a new tattoo, then kissed the female tattoo artist. Fans have waited forty years for this in-universe confirmation of Kitty’s sexuality. The rest of the series deals with her adventures as a pirate, her hatred of the nefarious Sebastian Shaw, and a team-up with her long-time frenemy, Emma Frost.

Star Wars was founded on the idea that a scrappy and diverse group of Rebels could band together and overthrow a fascist Empire. In Marvel’s 2015 Star Wars by Jason Aaron and John Cassaday, that diversity began to include queer characters in prominent roles.

One such character, Doctor Aphra, was actually introduced in the Darth Vader series by Kieron Gillen and Salvador Larroca before crossing over into the main Star Wars title, while another character who began as part of the main series was Aphra’s ex, Sana Starros.

Doctor Chelli Aphra is by far the most popular character to emerge from Marvel’s Star Wars comics. After her appearances in the Darth Vader series, she received an ongoing series of her own. It ran for forty issues before coming to a close. Then she starred in yet another series, this one written by the prolific Alyssa Wong and still ongoing at this time.

RELATED: 10 Star Wars Comics That Flesh Out The Original Trilogy

Aphra is basically a slightly darker version of Han Solo, but she is also Indiana Jones. Like Indie, she’s a rogue archaeologist and treasure hunter who gets into scraps, causes trouble, and gets the girl. Also like Indie, she leaves a lot of broken hearts and chaos in her wake. She’s not exactly a “good” character, but she’s fun. And she is definitely trying to be better. Mostly. Sort of. Unless there’s treasure involved. Or shiny new robotic weapons. Or one of her many, many enemies.

The 18-issue miniseries Avengers Arena by Dennis Hopeless and Key Walker follows young heroes who were kidnapped and forced to fight one another to the death. Some are established characters. Others are new.

One of the characters is Cullen Bloodstone, a member of the great Bloodstone family of monster hunters. His journey to come out to the guy he likes is one of the sweetest parts of this very intense story of blood sport, betrayal, and survival. The resolution is also satisfying while defying the usual cliches.

The original 2017 America series by Gabby Rivera and Joe Quinones took the Latina lesbian superheroine on as a new adventure of personal discovery. This book was met with a massive backlash from bigots (which might be all the more reason to read it.)

Miss America is a great hero in her own right, able to move at incredible speeds and punch holes in reality to pass between dimensions. This is part of why she received a second series, entitled America Chavez: Made in the USA. Written by Kalinda Vasquez and drawn by Carlos Gomez, this book is a great jumping-on point for new fans.

Both Spider-Man and Deadpool are beloved characters with great senses of humor and fun powers. While Spider-Man is straight, his biggest fan is Deadpool, who is very open about his pansexuality.

Honestly, many of the Deadpool comics from the past decade have some reference to his love of men, but there is something great about seeing the Merc with a Mouth open up about his feelings to his best frenemy Spider-Man.

There was a really uncomfortable scene some time back where Iceman was outed from the closet against his will by Jean Grey after she telepathically read his mind. He was one of the original X-Men team, and yet he had never come out as gay in fifty years of X-stories.

Since then, there have been two Iceman comic series that came out in 2017 and 2018 respectively, each of which was nominated for a GLAAD Award. The first series (by Sina Grace and Alessandro Vitti) involves the character learning to celebrate and embrace his sexuality. He also teams up with other heroes like Hercules and even his time-displaced teenaged self. The 2018 series by Grace and Nathan Stockman has him engage in another superhero team-up, this time with the psychic mutant Emma Frost. The two eventually enter into Iceman’s own mind, exploring his growth over the years and the reasons for his journey. Both are extremely fun and moving stories.


Next
Marvel: 10 Most Villainous Teams

Theo Kogod is a freelance writer, educator, researcher, and activist. He helped found the magazine 3 Feet Left as its Resident Writer while working as an English teacher in Japan. Since then, he’s written for various online publications, including CBR, Screen Rant, The Gamer, and The Comics Vault. His published fiction includes the prose superhero story “Typical Heroes” released by Diabolical Plots and the sci-fi story “Antediluvian” in the anthology A Flash of Silver-Green. He currently lives in North Carolina with his spouse, two adorable cats, and an ever-growing book-hoard.

You can also watch his videos on YouTube under the name Theo Kogod, where he posts sporadically.