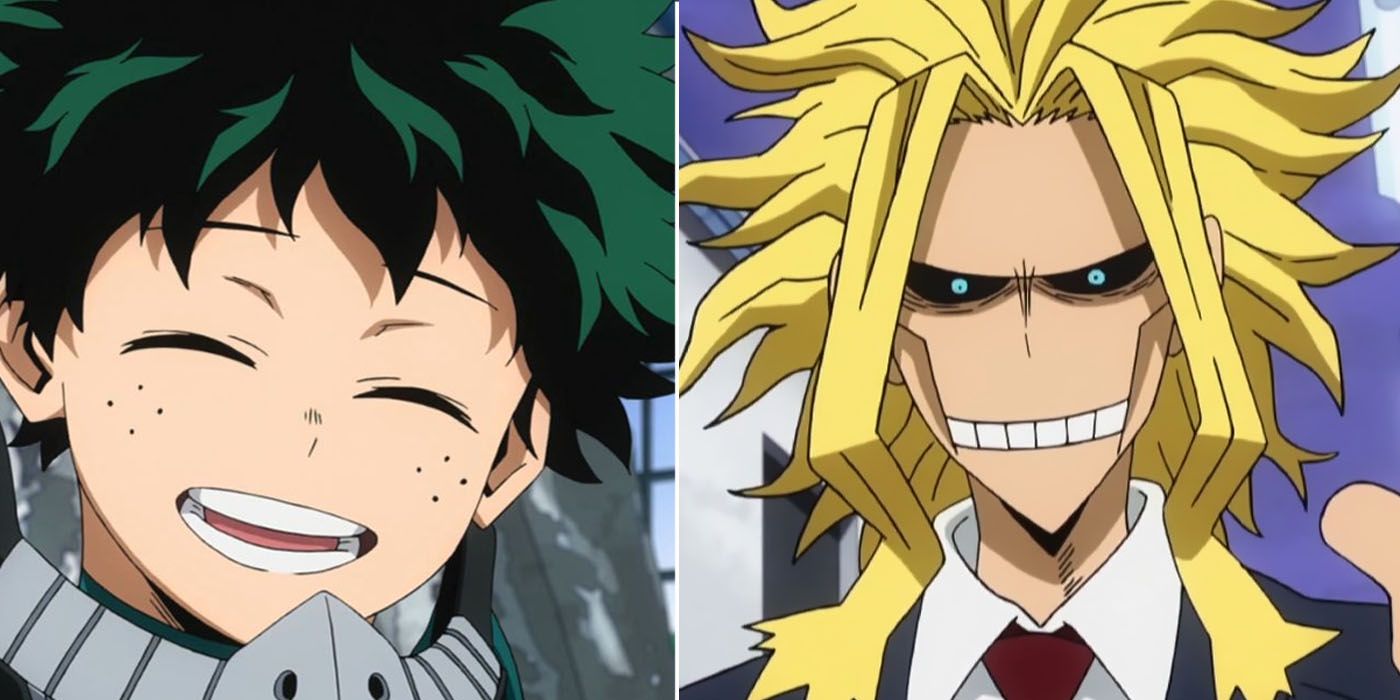 All Might saw a lot of himself in Deku when he first met him. Although Deku was very clumsy and Quirkless, he had all of the qualities of a good hero in My Hero Academia. He was studious and selfless, his instinct making him rush to help someone no matter the situation.

RELATED: My Hero Academia: 10 Ways All Might Impacted The Series

They shared a lot in common, making All Might an ideal mentor for Deku. However, Deku truly made the power of One For All his own due to his unique experiences. Thanks to the fact that his body has yet to adjust to the power of his Quirk, Deku had to think of many ways to utilize the Quirk without completely destroying himself in the process.

10 Same: They Were Both Heavily Injured In Battles

Both heroes are the type of people who would sacrifice their own well-being in order to save more lives. All Might was brutally injured in his first fight against All For One, his form becoming withered and his side bearing a permanent scar. He was even willing to sacrifice the rest of his power to subdue the villain.

Deku injured himself on many occasions, but his most noticeable injury is the one on his right hand, and his hero costume was tailored to support various parts of his body that have yet to heal.

All Might, Gran Torino, and Nana Shimura all faced All For One, but even with their efforts combined, they lost. As a result, Gran Torino told All Might to flee to the U.S. where he would be out of All For One’s reach.

After graduating, All Might heeded Gran Torino’s advice and went to the States to train. Deku has never fought All For One personally, given that he was more focused on saving Katsuki Bakugo and obeying the school rules. He also hasn’t graduated from U.A. yet.

8 Same: They Were Both Quirkless Successors of One For All

Both All Might and Deku started off completely Quirkless, something that is rare in their world. All Might told Nana about his ideals and his desire to become a pillar that society could rely on, and trusting his word, she bestowed her power on him.

Deku touched All Might by selflessly trying to save Katsuki Bakugo despite having no power of his own. This inspired All Might to be a better hero.

Deku is known for being one of the biggest fans of All Might, next to Sir Nighteye. His room is filled with all kinds of All Might merch, and the pro hero was Deku’s inspiration. He closely followed All Might’s career and even modeled his fighting style and actions after his for a long time.

All Might doesn’t seem to have a fan-like devotion to anyone, although he sees his mentor, Nana Shimura, like a mother.

6 Same: They Both Became The Number One Hero

For many years, All Might kept the title of number one hero due to his impressive feats and strength. He became a pillar of society that everyone felt that they could rely on, making everyone feel safe and lowering the number of crimes that happened in Japan.

Although fans have yet to see Deku become the number one hero, he already confirmed that it will happen in the future through narration.

5 Different: They Have Their Own Fighting Styles

All Might is known for his punches, many of which have names inspired by the different states of the U.S. Deku tried to copy All Might’s style by relying more on his punches, but his training under both Gran Torino and Sir Nighteye taught him to rely less on punching, especially since it was taking a major toll on his body.

He now uses his strength to blast air at his opponents, relies on his speed, and is slowly gaining more Quirks from the previous One For All users.

4 Same: People Have Asked Them To Stop Being Heroes

Being a hero comes with many risks. All Might’s sidekick, Sir Nighteye, foresaw All Might’s demise and begged him to retire. However, All Might refused his request. He was determined to continue to be the Symbol of Peace until he found a successor.

RELATED: Does All Might Die In My Hero Academia? & 9 More Questions About Him, Answered

Deku’s mother asked Deku to retire because she was worried sick about him, especially considering the fact that he consistently faced the League Of Villains and got injured so frequently.

All Might’s civilian identity was a complete secret, given that no one would have ever suspected that the muscular and powerful Symbol Of Peace would look so withered most of the time.

Although All Might did an excellent job of keeping up the façade of being just fine in hero mode, the rest of the time he was coughing up blood. Most heroes do not have a secret identity since they need to be licensed to work as heroes.

2 Same: They Comfort People By Smiling

All Might is known for smiling widely while doing hero work. This inspires confidence that he can save others without fail, which is why a great number of people like him. A smile is also comforting, as people who need to be saved also need to be comforted as well.

After returning to Japan, All Might worked with Sir Nighteye, who served as his sidekick until their falling out years later. Deku, having yet to graduate, does not have a sidekick. Instead, he often works alongside the other aspiring heroes in his class.

Whenever he has a conflict with someone else in his class, unlike All Might, he resolves the conflict very quickly. All Might spent a long time being too embarrassed to approach his former comrade.


Next
One Piece: 10 Theories About Blackbeard That Could Be True