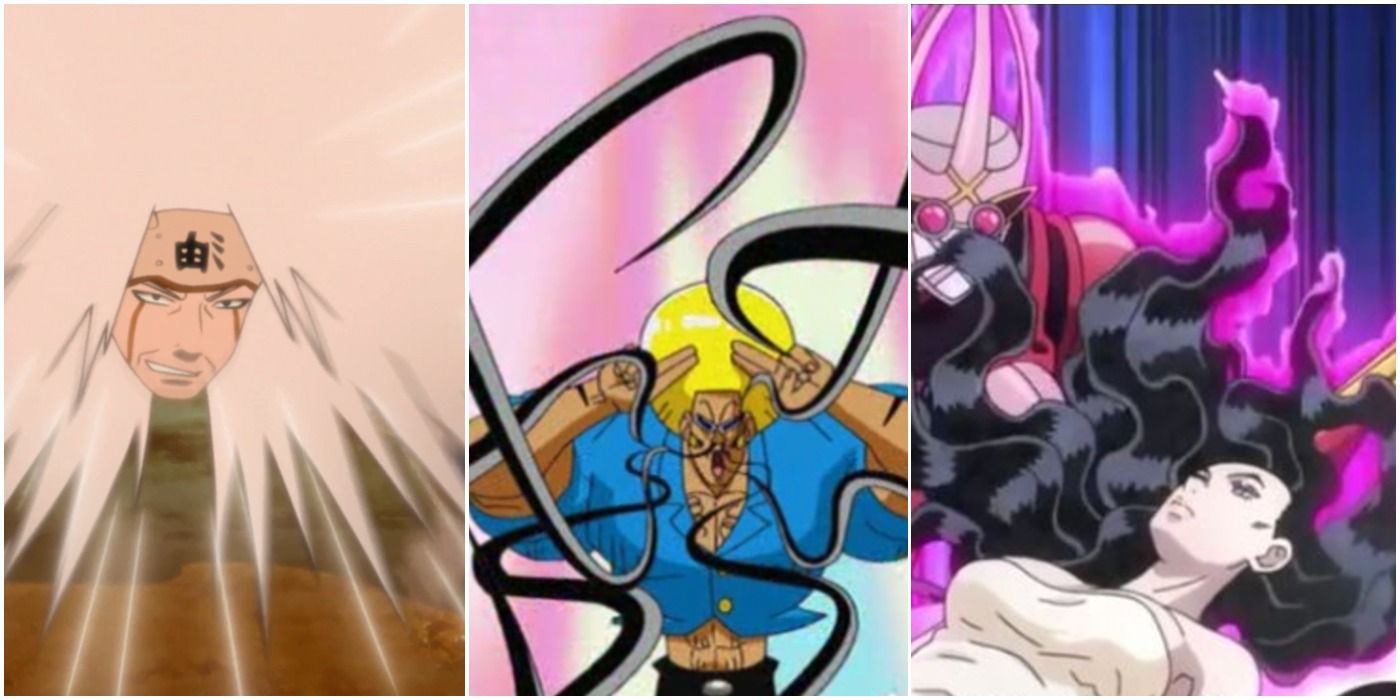 There are all sorts of mediums of entertainment that feature exceptional storytelling, but anime is something that feels truly limitless when it comes to what’s possible. Anime has a commendable reputation for hyperbolized stories that feature unbelievable fighters who engage in even more ridiculous demonstrations of power.

RELATED: 10 Of The Strongest Anime Weapons (That Aren’t Swords)

There are multiple genres of anime that specifically cater toward sensational battles, and often there are surprising and atypical tools that can be the catalyst to the entire series. Arduous training and special abilities are crucial in anime, but sometimes a character’s strongest weapon is even closer than they think and literally connected to their heads.

Bobobo-bo Bo-bobo is one of the very best and most absurd gag anime series of all time, and it’s lampooning of shonen anime is practically unparalleled. The titular character functions as a parody of many anime protagonist archetypes, right down to his signature ability. Bobobo fights with his hair, but it’s specifically his nose hairs that do the heavy lifting here. Bobobo utilizes the legendary “Fist of the Nose Hair” fighting style to make sure that his follicle-based attacks are as powerful and ridiculous as possible.

Naruto is full of powerful ninja who all demonstrate eclectic abilities, but Jiraiya’s means of defense are certainly some of the most creative in the series. Jiriaya has a mighty mane of hair that serves plenty of practical purposes beyond just looking fashionable. Jiraiya can release projectile energy through his hair and turn them into needles or he can also adopt a more intuitive fighting approach with his Wild Lion’s Mane Technique. Jiraiya has put in the work to make his hair the ultimate weapon, and it becomes an even deadlier means of attack once he’s in Sage Mode.

8 Sunny’s Hair Provides A Rainbow Of Opportunities In Toriko

Toriko is a foundational series out of Shonen Jump that should have the same reputation as Dragon Ball or One Piece, but it’s oddly remained more of a cult title outside of Japan. Sunny is a Toriko character who would garner a lot of attention over his hair even if he didn’t fight with it.

RELATED: 5 Anime Weapons We’d Love to Use In A Fight (& 5 That Are Useless)

Sunny is blessed with rainbow locks that are easy to get lost in, but his hair can also administer serious damage. All of the different colors in Sunny’s hair serve unique purposes, which leave him quite prepared for whatever gets thrown at him.

A lot of the characters here utilize their powerful hair in comparable ways, but Fairy Tail’s Flare Corona of the Raven Tail Guild is easily one of the most resilient and elaborate examples of hair-based fighters. Flare Corona uses magic to manipulate her hair in limitless ways. Flare Corona’s hair can grab, impale, or form bullets to use against the enemy. Additionally, Flare Corona can adjust the durability and temperature of her hair, which allows it to become impenetrable armor or literally something that she can use to set people on fire.

JoJo’s Bizarre Adventure is one of the most creative shonen series of its kind and the franchise has evolved in impressive ways since its debut in the 1980s. There are so many deadly Stand users in JoJo’s Bizarre Adventure that it’s only inevitable that a hair-based fighter would make an appearance. Yukako Yamagishi is from Diamond is Unbreakable and initially seems like a romantic interest for Koichi, but unfortunately, her cumbersome hair is the biggest obstacle between them. Yukako is sometimes prone to more intense behavior, which often seems to get amplified by her renegade hair’s actions.

Bayonetta is a breakout video game series that centers around hyperbolic action and the chaotic combat of deadly witch, Bayonetta. The action series is a perfect fit to translate into an anime, and Bayonetta: Deadly Fate accentuates the grandiose opponents and apocalyptic battles that come Bayonetta’s way.

RELATED: 10 Most Powerful Weapons In All Of Anime

The Bayonetta character exudes style and sassiness, and she only becomes more memorable due to her unconventional attacks, which involve turning her hair or boots into executioner tools. Bayonetta has many ways to take out her enemies, and it’s a guarantee that however it happens, it won’t be predictable.

4 Jasdevi Is A Grim Fusion Who Turns Hair Into A Murder Weapon In D. Gray-Man

D. Gray-Man is an incredible examination of life, death, and everything in between that ran for over 100 episodes during the mid-2000s. The anime explores familiar territory, like the importance and weaponizing of souls as well as powerful exorcists who can fight these darker forces. Jasdevi is one of D. Gray-Man’s most terrifying creatures, and it’s a combined version of Jasdero and Devit, two twins. Jasdevi can make his hair razor-sharp and impale people with it, but the follicles will also gain a life of their own and independently fight if they get cut.

Black Cat is an anime that follows dangerous bounty hunters in an increasingly lawless world where bio-weapons and nanotechnology may be the key to a safe future. Eve is one of these bio-weapons, and she’s an incredibly capable killing machine. Eve’s unassuming appearance is part of what makes her such a threat, but this principle gets taken even further through her various transformations. One of these perks gives Eve complete dominion over her hair, which usually results in her turning it into a multitude of weapons, whether they’re needles, hammers, or even giant fists.

2 The Hair Of Recca’s Mother, Kagero, Comes Alive When Exposed To The Right Elements

Some of the most iconic shonen anime series come out of the 90s, yet Flame of Recca is a concise and satisfying property that’s ideal for a modern remake that reminds audiences why it’s so important. The anime revolves around Recca Hanabishi’s unlikely indoctrination into a world of supernatural abilities and ninja skills, but his mother, Kagero, is also an important figure. The use of a special orb turns Kagero’s hair into deadly needles that she’s used to kill some powerful demons. Kagero is no match for her son, but her special hair would definitely give him pause.

One Piece has featured hundreds of intimidating villains, and the diverse effects of Devil Fruit have led to some extremely interesting pirate warriors. Kumadori is a One Piece antagonist who doesn’t look like a normal fighter due to his extremely long pink hair. However, Kumadori’s hair is his greatest asset and he uses his sprawling hair to bind and strangle his opponents. Kumadori is a little more restricted with his hair than some of the other hair-based fighters in anime, but he shouldn’t be underestimated as he nearly takes out Nami through these unusual tactics.

NEXT: 10 Anime Characters Who Can Weaponize Sound, Ranked

Daniel Kurland is a freelance writer, comedian, and critic, who lives in the cultural mosaic that is Brooklyn, New York. Daniel’s work can be read on ScreenRant, Splitsider, Bloody Disgusting, Den of Geek, and across the Internet. He recently completed work on a noir anthology graphic novel titled, “Sylvia Plath’s The Bell Noir: A Rag of Bizarre Noir and Hard Boiled Tales” and he’s currently toiling away on his first novel.