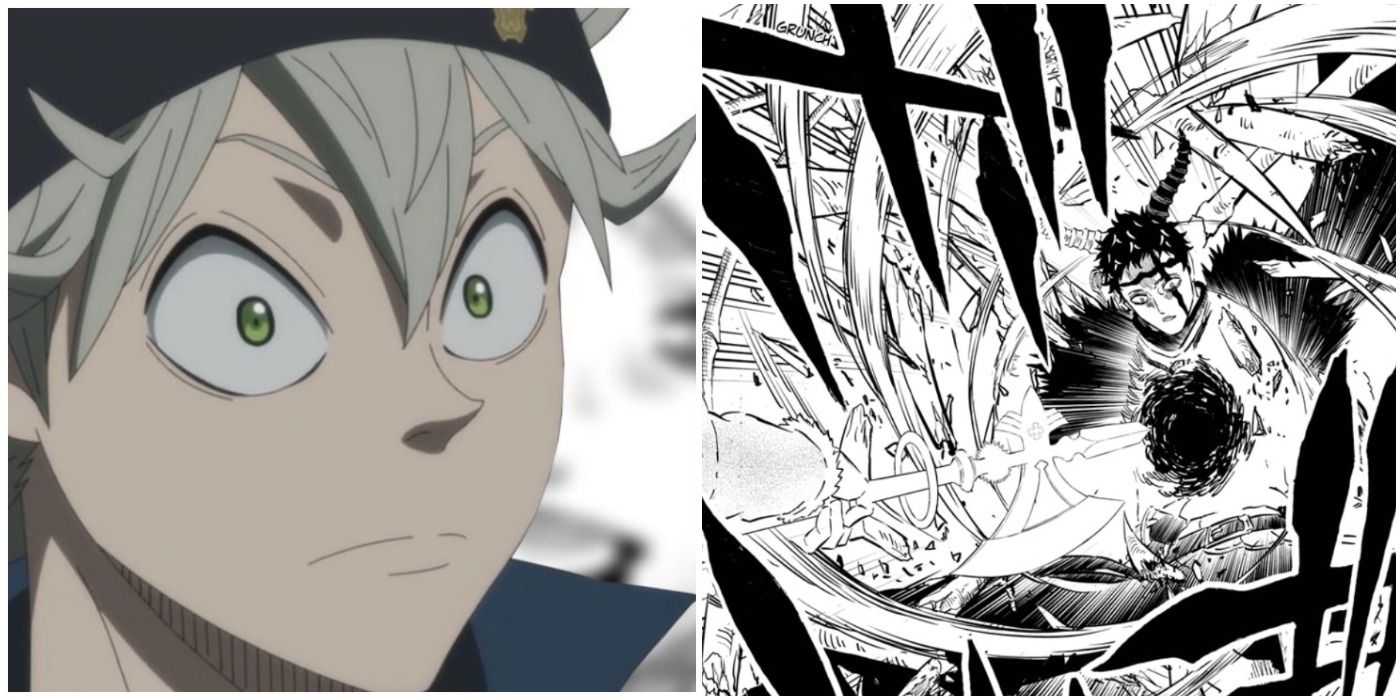 Though Black Clover has come to an end as an anime, the manga is still going just as strong as ever.  As anime fans are aware, the characters experienced a brief six-month time skip which gave the characters time to prepare for the newest threat to their Kingdom.

Of course, anime time skips are used as a plot device that offers the creator a chance to shake things up and show growth in their characters without having to do multiple arcs to explain how they got so good.  While Black Clover had a relatively short time skip compared to other shonen anime, there have still been plenty of developments in the series that might make some lapsed fans want to check-in.

One of the first things the manga establishes after the time skip is just how powerful Asta has become. After six months of training, he runs into some members of the Spade Kingdom attempting to drain some innocent citizens of their magic.  Though the group is meant to be quite powerful, Asta arrives at the scene while actually riding his sword and dismisses them with ease. He displays the ability to fight three high-level elemental mages at once, dispatching them in a matter of seconds.  Later, he fights a mage who attempts to poison them and not only absorbs that magic but also cuts their fortress in half with his Demon Slayer Sword.  This version of Asta is not only more confident but far more skilled than he’s ever been.

The entire point of the Golden Dawn is being the Magic Knight faction that’s the most powerful in the entire Clover Kingdom.  Despite all the Black Bulls’ efforts, the Golden Dawn prove to have not only a larger group but also a more powerful collection of mages overall.  However, events during the time skip show weakness in not only Yuno but all of the Golden Dawn.  The group finds themselves under attack by some of the Spade Mages, who obliterate the Golden Dawn’s base and destroys their number while looking for William Vangeance.  Even Yuno’s powers pale in comparison to what their leader Zenon has available, and the entire guild is left decimated.

Fans were wondering exactly what kind of person the Black Bulls’ Vice Captain was for several arcs now.  Every other guild had long shown off their vice captain’s identity and what their role was in the group, but Yami never even brought up the fact that they had a Vice Captain, with some fans speculating that their group’s Vice Captain was actually Zora. However, after Yami is kidnapped by Zenon, Nacht makes his appearance. A character wielding the power of demons, Nacht knows more about the Spade Kingdom’s powers than anyone else and is part of the reason why the Clover Kingdom is able to lead an assault on the Spade Kingdom.

7 Noelle Learns About Her Mother

Since the beginning of Black Clover, one of the mysteries has been what happened to Noelle’s mother. All that was known was that she was a powerful, yet gentle warrior who was beloved and respected by all.  But no one knew how she fell in battle until the time skip, where Noelle meets the woman responsible for taking her life — Vanica Zoegratis. Vanica’s habit of kidnapping people to make her opponents take her more seriously resulted in a battle with Acier, the aftermath of which would take Acier from Noelle. Now more than ever, Noelle has her motivation to become powerful.

6 Asta Is Placed On The Same Level As Yami

Much of Black Clover‘s storyline is Asta learning how to fight on the same level as the first man who ever put trust in his abilities, Captain Yami.  Throughout the series, Asta watches and learns under Yami’s unique tutelage and gradually develops techniques based on Yami’s fighting style.

RELATED: Is Black Clover Good? & 9 Other Doubts About The Series, Cleared Up

But when the group faces Dante, they have no other option but to have Asta stand at the same level as Yami. He’s forced to beg for power from the demon inside of him, but he manages to fight nearly at that level, displaying how far his training had brought him since their last time working together.

Asta’s story has been shrouded in mystery from the beginning.  While before the time skip it was explained where Yuno came from when he was given up, fans were still left in the dark with the series protagonist.  But finally, the series explains who Asta’s mother is after Liebe, the demon inside Asta, is summoned. As it turns out, Asta’s mother was a woman with the unique ability to drain magic from anyone she was close to, so she gave her son up to the orphanage to avoid hurting him. Afterward, she discovered Liebe and raised him as her own until one of the devils took her from him, leaving both Asta and Liebe with a reason to defeat the Spade Kingdom.

4 Mereoleona Becomes Even More Powerful Than She Was Before

Of all the things that could happen in the Black Clover world, no one was expecting Mereoleona to become even more powerful than before. The uncrowned, undefeated lioness proved herself to be one of the most capable Captains in the Magic Knights from the moment she was introduced.

RELATED: Every Character’s Age In Black Clover After The Timeskip

She managed to stand against five elves at the same time and still wasn’t defeated, and yet she found a way to increase her power even more in a recent arc. With the help of training in a volcano, Mereoleona now knows how to absorb Fire Magic to make her strong enough to fight a giant demon with relative ease.

3 The Elves Have Become Allies To The Human World

After going through so much betrayal, the elves realized what had been done to them by the demons and gave up their enmity toward humanity. Instead, they left the Clover Kingdom and found a neutral area to live in.  The group found a location named Elysia, a village they made their own.  But rather than completely abandoning contact with the rest of the world, the elves are also responsible for saving several members of the Clover Kingdoms’ Magic Knights after their defeat at the hands of the Spade Kingdom’s best soldiers.  They also agreed to help all of them grow strong enough to fight back against the Spade Kingdom, officially making them allies of the humans.

2 A Ticking Clock Is Introduced To Raise The Stakes

In most of Black Clover‘s arcs, it’s simply a matter of defeating the villains and everything is fine. But during post-time skip, the stakes have been raised considerably. The Spade Kingdom’s aims are nothing less than to break the barrier between the human world and the demon world.  To do that, the group has kidnapped Yami Sukehiro and William Vangeance, intending to use them to open the gate in a ritual.  The group collectively has until the ritual is finished before the gate opens, which doesn’t give them much time to gain power-ups for the last fight.

1 Asta Learns How To Fuse With His Partner Liebe

Asta has been slowly learning how to use his Anti-Magic power, but the current arc needed him to completely figure it out in a matter of days. Nacht is fortunately around to push the issue, having mastered exactly the right method to bring out Asta’s power. He starts by forcing Asta to confront Liebe, the devil he’s been working with. And after Asta wins that fight, the two of them become friends, with Asta gaining the ability to use Liebe’s power in his Unite Form. After spending several more days mastering this form, Asta has never been more powerful.

NEXT: Black Clover: 10 Things You Didn’t Know About Julius Novachrono


Next
Demon Slayer: Mugen Train – 4 Hashira That Could Have Beat Akaza (& 4 That Would’ve Died)

Lover of all things obscure, Sage Ashford has also written for Comicon.