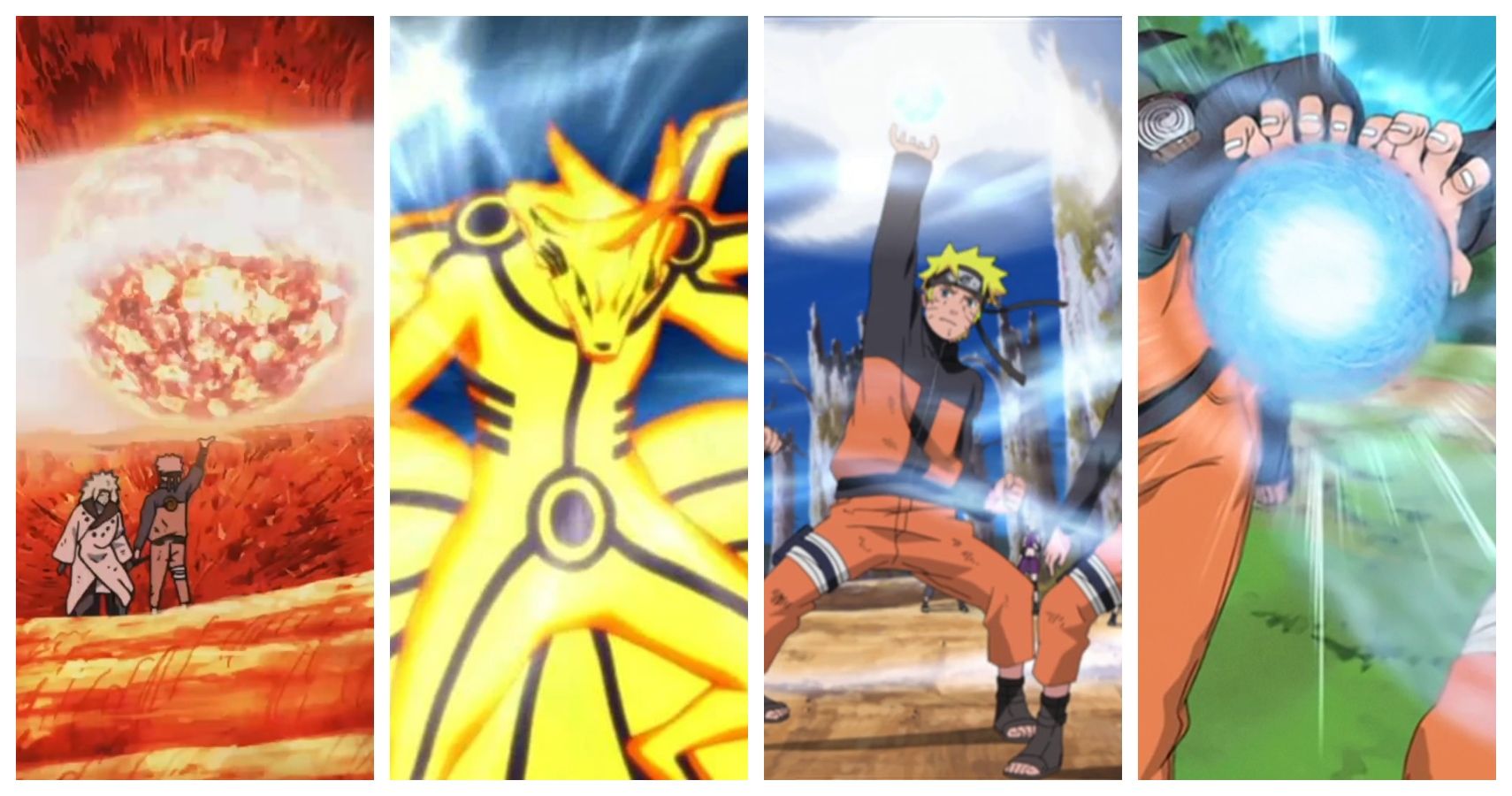 Naruto Uzumaki is one of the strongest shinobi to have ever existed in the entire series of Naruto. The son of the Fourth Hokage, Minato Namikaze, and Kushina Uzumaki, Naruto went on to become the Seventh Hokage himself and fulfill his dream in the process. Although he has already achieved his dream, he continues to work hard and get stronger, and as such, his Jutsu arsenal keeps on getting larger as well. From being inept at Ninjutsu to becoming one of its most extensive users, Naruto has shown tremendous growth throughout the show.

RELATED: Aang VS Naruto: Who Would Win?

Updated October 6th, 2021 by Olivia Subero: With the recent progression of the Boruto: Naruto Next Generations, Naruto’s jutsu repertoire has steadily increased. On top of the variations of the Rasengan, Naruto has collaborated with Kurama on a brand-new jutsu that shocked even his longtime friend, Sasuke. There was also a jutsu Naruto has mastered that not many fans may have known about, something that occurred earlier in his ninja career.

On the surface, it isn’t as powerful as even a basic Rasengan, but Naruto’s Multi Shadow Clone technique has proven indispensable on several occasions. One of the most memorable instances is during Naruto’s fight with Pain, where Naruto unleashed countless copies of himself to help pacify the deadly Deva Path of Pain. On top of that, Naruto’s shadow clones can do almost anything Naruto himself can do, provided they have enough chakra to do it. This means that Naruto’s Shadow Clone technique technically has no upper limit in usability.

This is a larger iteration of Naruto’s traditional Rasengan, though it’s only as big as the Fourth Hokage’s Rasengan. Also known as the Big Ball Rasengan, the Oodama Rasengan was first unleashed upon a copy of Itachi during the mission to rescue Kazekage Gaara. It is worth noting that Naruto’s “regular” Rasengan became as big as the Oodama Rasengan during the Naruto: Shippuden series.

This is a two-handed version of Naruto’s traditional Rasengan, allowing him to wield a Rasengan with each hand. Naruto unleashed this attack when he emerged in Sage Mode after being trained by Ma and Pa Toad. He used this attack against Pain, proving to be a far more effective attack than Naruto’s regular Rasengan.

This was the first significant improvement upon the initial Rasengan technique. This skill reshaped the Rasengan to resemble a giant shuriken and was forged after Asuma Sarutobi helped Naruto master his control over the wind element. He unleashed it first upon the Akatsuki member, Kakuzu. The main hitch that made Rasenshuriken so effective is that it cut its target on the molecular level, and it proved effective in that fight against Kakuzu.

Naruto also released this attack during his fight with Pain. The quirk of this attack is that the Rasengan ball was formed to be as large as Naruto’s body. This is technically an expansion on the Oodama Rasengan but even larger. In other words, the bigger the Rasengan, the more destructive it is.

Unveiled during the initial phase of the Fourth Great Ninja War, the Planetary Rasengan is an advanced technique that utilizes three to four different Rasengan at once. As Naruto Uzumaki forms a big Rasengan in the palm of his hand, it is further surrounded by 2-3 smaller Rasengan that revolve around it. Its power is such that just a single hit from this technique incapacitates a shinobi as strong as a Kage. The Planetary Rasengan is a fearful technique that no shinobi would want to get hit with.

The Super Big Ball Rasengan Barrage is one of Naruto’s most powerful techniques, primarily because it makes use of the Sage Chakra. As explained in the series, mastering Sage chakra gives one a significant boost in all their strengths.

For Naruto, using this potent form of chakra together with his Big Ball Rasengan Barrage makes this Jutsu exceptionally powerful. While it hasn’t been utilized a lot, it holds enough power to subdue even a Tailed Beast, which says a lot about how destructive it can be.

As a disciple of Mount Myoboku, and master of Sage Mode, Naruto is well-versed in the Frog Kata style of taijutsu. This fighting style allows users to take advantage of the natural chakra around them and coat them in a chakra cloak. Like an animal, their heightened senses give them quicker reflexes, making them more aware of their opponents’ upcoming attacks. This provides the user with a better opportunity to counterattack.

Created during the Fourth Great Ninja War, the Super Odama Rasenshuriken is an enhanced version of the regular Rasenshuriken. In this technique, Naruto uses his shadow clones to magnify a Rasenshuriken exponentially, making it highly lethal. Although this jutsu requires a lot of time and, of course, chakra to prepare, it is just as effective when used because it rarely allows its target to escape alive. Naruto usually relies on Kurama’s chakra to make it stronger, which gives this jutsu the required boost to crush whatever stands in its path.

The Baryon Mode was recently introduced in the most recent episode of Boruto. This new jutsu fuses Kurama’s and Naruto’s chakras, producing a new, rarer form of energy unique to only the Nine-Tails and its Jinchuriki. Naruto’s reflexes, speed, and overall power increase to unbelievable levels making his attacks more lethal. His growth in power greatly weakens Isshiki Otsutsuki; with every punch or kick exchanged, the opponent’s chakra and lifespan drain significantly. However, there is a heavy drawback to this new jutsu, which is the mirror effect it has back on the user.

As a disciple of Mount Myoboku, and master of Sage Mode, Naruto is well-versed in the Frog Kata style of taijutsu. This fighting style allows users to take advantage of the natural chakra around them and coat them in a chakra cloak. Like an animal, their heightened senses give them quicker reflexes, making them more aware of their opponents’ upcoming attacks. This provides the user with a better opportunity to counterattack.

Employing the use of Naruto’s very first Kekkei Genkai in the series, the Lava Release Rasenshuriken makes use of Son Goku’s Lava Style chakra to amplify the destructive power of the Jutsu. Using perfect chakra control, Naruto creates a large Rasenshuriken and adds Son Goku’s chakra to it, making it strong enough to cut apart Madara Uchiha in his Six Paths state and destroy the God Tree in the process.

Naruto Uzumaki again uses this technique against Delta in Boruto. However, it is absorbed by her advanced mechanical eye. Since it employs the Tailed Beasts’ power, Naruto only has access to it during his Six Paths state.

Derived from Naruto Uzumaki’s Ultra Big Ball Rasengan, the Super-Ultra-Big Ball Rasengan is a far more powerful version of the technique mentioned above. It is accessible to Naruto in his Six Paths Sage Mode, which means it employs the Six Paths chakra, making it one of Naruto’s strongest techniques. Its sheer destructive power is such that Delta couldn’t absorb it completely, and as Naruto finished her off, it left a massive crater on the surface of the Earth. Naruto was holding back severely since he didn’t want to kill her, implying the full potential of this jutsu remains to be seen.

The Tailed Beast Rasenshuriken was developed by Naruto during the Fourth Great Ninja War, thanks to his Six Paths Sage Mode in which he has access to 9 Truth-Seeking Balls. These orbs have both offensive and defensive capabilities, with them being strong enough to disintegrate anything on contact. Using the Truth-seeking Balls,  Naruto creates multiple massive Rasenshuriken and hurls them at his enemies. Its power is magnificent enough to match a meteor shower and utterly crush them, making this technique one of Naruto’s strongest.

Naruto Uzumaki’s strongest jutsu, the Ultra Big Ball Rasenshuriken, was expanded to counter Sasuke’s strongest Jutsu, Indra’s Arrow. This jutsu is accessible to Naruto in his Six Paths Kurama state; he releases the massive amounts of stored sage chakra at once to create two huge Rasenshuriken with destructive capabilities. When fired, it completely changed the planet’s atmosphere and drained every ounce of chakra from his body.

NEXT: Avatar: 5 Characters Who Would Pass The Chunin Exams (& 5 Who Would Fail)


Next
Attack On Titan: All 9 Titans, Ranked By Design

Rei Penber is an avid fan of anime and manga. He is the author of some of the articles here that you liked, and others that you didn’t. When he isn’t writing, he is often reading all sorts of manga. His other hobbies include exploring the beauty of nature when he can. You can connect with him on his email: reipenber17@gmail.com