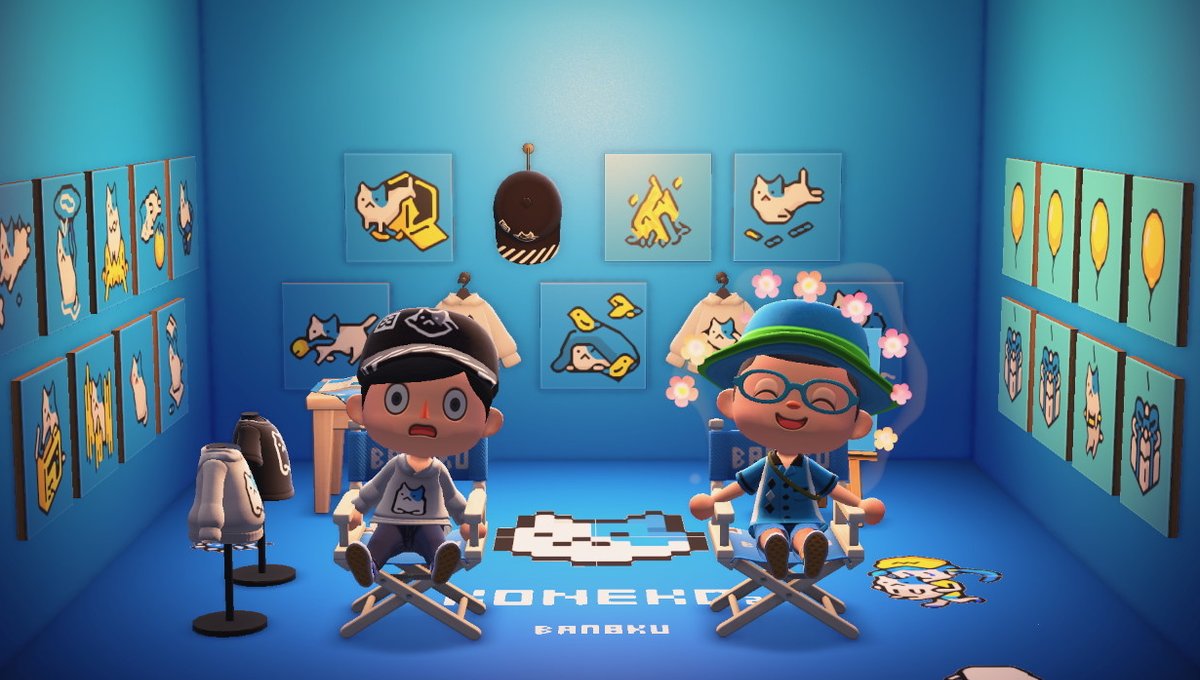 Everyone, are you playing Animal Crossing: New Horizons? It’s a Nintendo Switch game that came out in March! It’s an adorable game that lets you cultivate an uninhabited island as freely as you want for a fun life.

The pixel artist BAN-8KU took advantage of just how free the game lets you be by opening his very own art exhibition within the game: the Koneko Exhibition! (Koneko means kitten.)

In the game, each Nintendo Switch has one island. One of the game’s biggest charms is seeing how creative each player is with their island, so you can visit other islands and enjoy how they have it set up or otherwise get frustrated that your island isn’t as nice as other people’s.

The game also offers a custom design feature that you can use to customize items inside the game with your very own pixel art. Real-life pixel art artist BAN-8KU used that feature to open a pixel art exhibition on his island.

We were really excited about the idea, so we asked if we could interview him at the exhibition on his island. That’s how we were able to make this report for you guys!

The exhibition itself is over, but we hope this report will make you feel like you were able to attend.

I’ve arrived on BAN-8KU Island! I didn’t expect for things to be this detailed!

Here I am at BAN-8KU Island! When I stepped on the port, I was immediately greeted by the Koneko that is the artist’s icon. It immediately felt like I was on an art island!

I wandered around the island to see art displayed here and there. Is this the true definition of public art?

Even on the beach there was a Koneko art piece. Apparently it had rained the day before, so he had put a leaf umbrella over it because he felt bad. BAN-8KU, you’re completely immersed in the world of your own art, huh?

This doghouse was given to him by someone who came to see the Koneko Exhibition. It looks pretty ferocious…is the cat okay?

I can’t keep BAN-8KU waiting, so I head for the plaza in the center of the island to meet him.

The person on the left is BAN-8KU. Oh! He’s wearing a Koneko hoodie! I think his hat is also original. I immediately want it…

Lots of exhibits and photo spots are set up in front of the exhibition venue on the right. Say cheese!

It’s finally time to go inside! I can’t wait!

When I entered the Koneko Exhibit, a surprising space awaited me!

Amazing! This is beyond what I had imagined!

It really is an exhibition! Each and every piece is a full picture. Isn’t this wild? He made this inside a video game! No wonder he looks so smug. I would, too.

The lineup is varied from canvasses to apparel, all featuring different Koneko pieces. They’re all so cute…

Even the magazine on top of the table features Koneko.

He prepared a set for us to use during the interview and he designed the chair to have his name on it! I want this a lot, but in real life.

It’s time to sit in this chair and begin our interview!

TOM: Please introduce yourself for the readers.

BAN-8KU: I’m BAN-8KU, an artist who works mostly with pixel art. I work on a variety of projects such as my own artwork, corporate promotions, and illustrations.

TOM: Thank you very much. Every year, you work with us on our Tokyo Game Show T-shirts. Congratulations on opening the Koneko Exhibition. Everything is more detailed and complex than I expected, so I was really surprised!

BAN-8KU: Thank you very much. The game only just went on sale, so I spent two days making it all.

TOM: What? Did you plan to do this before the game even came out?

BAN-8KU: At first, I thought that I could fill my house with my own art when I heard that Animal Crossing made the custom design feature specialize in pixel art. Then, when I finally started playing the game, the custom design and the furniture arrangement features were beyond my expectations. For example, I can rearrange the room to the smallest features and even display a lot of artwork high up on the walls. It surprised me and it made me think that I could make a unique space like an exhibition.

TOM: That’s true! I was able to enjoy this as though I was at a real exhibition. Since this is the Koneko Exhibition, what is the “koneko” character to you?

BAN-8KU: When I was a child, we had a lot of cats, but since I was a latchkey kid, I spent a lot of time alone. Video games and cats mean a lot to me.
I really love the behaviors that cats have when humans aren’t watching them, so I wanted to express that in my art and it became Koneko.

TOM: The shots of Koneko playing with the radio or oranges are really cute.
How do you feel about this exhibition? I think that having an exhibition within a game is a groundbreaking idea. Did it go as you expected it to?

BAN-8KU: At first, I thought that maybe just people I knew would come, but it got more impressions than I expected and a lot of people came. A lot of folks from Twitter tried to come, but an island can’t hold more than 8 people at a time, so I saw a lot of tweets from people who tried to visit for more than an hour but weren’t able to visit.

TOM: How did you spend your time as guests looked around the exhibition?

BAN-8KU: I used the game’s Reactions and the chat function to greet them and explain Koneko. It wasn’t much different from when I hold exhibitions in real life (laugh).

TOM: Remote work! You must have been pretty busy. Please tell us if you had any memorable reactions or messages from attendees.

BAN-8KU: I was really happy that a lot of people said Koneko was cute.
Some people outside of Japan came to my island, so I was thrilled at being able to talk to non-Japanese people since I usually don’t have the chance.

TOM: Did you talk to them in English?

BAN-8KU: I used an online translator to chat with them (laughs).

TOM: I see. It’s really wonderful that a Japanese artist like you could have attendees from around the world to your exhibition since it was held within a game.

BAN-8KU: I was really surprised that foreign artists that I’ve only seen on Twitter came since it’s pretty difficult for us to meet in real life.

TOM: It is, isn’t it? Please tell us if there are any other stories that left a mark on you during the exhibition.

BAN-8KU: I only realized it after the exhibition ended, but the island has a bulletin board and a lot of people left comments and their own Koneko illustrations. That made me really happy.

TOM: This is pretty moving! How long did it take for you to realize the bulletin board was there?

BAN-8KU: About three days (laugh). I remembered that I’d heard about a bulletin board and when I went to look at it, I was surprised by how much had been written.

I also thought it was interesting how naturally people would leave things as souvenirs. I got things like the doghouse and a cat tower, as well as a lot of items I could easily customize, like a drawing set and papers.

TOM: This is the last question, but is there something you’d like to say to the fans who came and to the people reading this article?

BAN-8KU: I’m delighted that many people were able to see Koneko and my art through Animal Crossing. I think it would be really interesting if more projects in real life and within games could be connected like this. If I come up with any more ideas, I’ll put up some art or information about them on social media, so I hope you keep an eye out for that.

TOM: We’re looking forward to it. Thank you for joining us for today’s interview.

That’s the end of our Koneko report.

What did you think?

The world is going through a difficult time right now, but even so, people are coming up with fun ideas that are giving other people energy and joy. As that chain of happiness connects throughout the world, it made us feel like we could spread that message as we finished looking around BAN-8KU’s exhibition.

As a single link in the chain, we hope we were able to make you smile even if it was just for a moment. If you did, then surely that made BAN-8KU on his wonderful island happy, too, along with all the Koneko cats.

This is a Tokyo Otaku Mode original article.