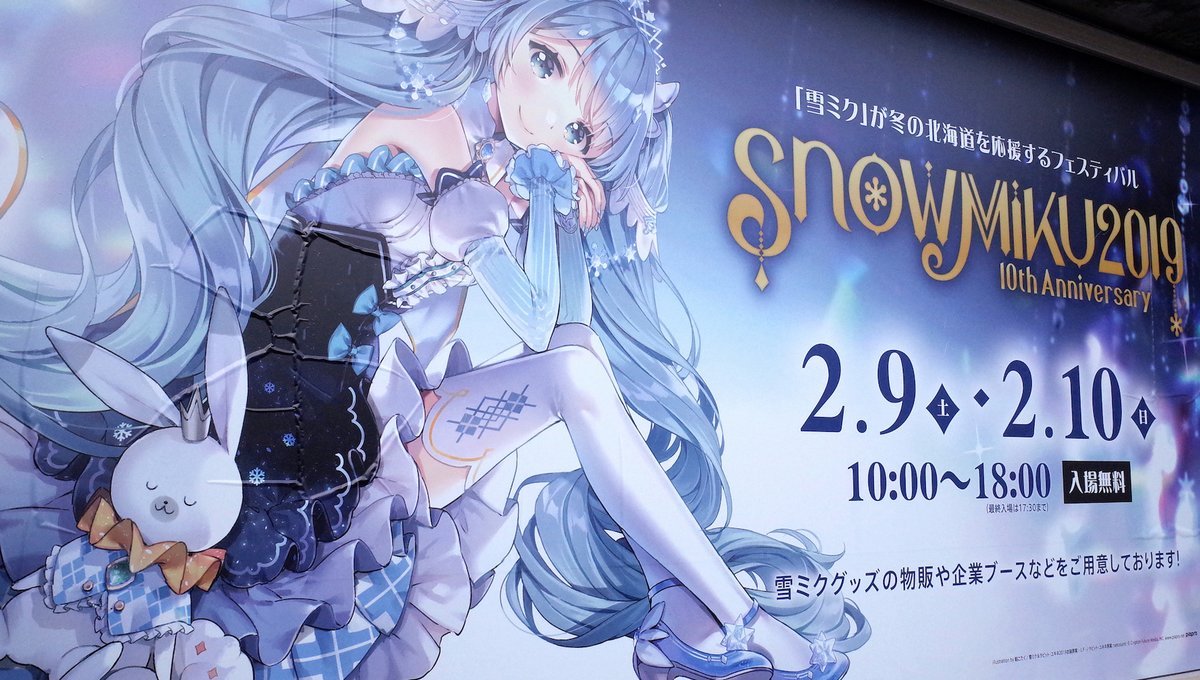 We went to SNOW MIKU 2019, held during the same period as the Sapporo Snow Festival! Tokyo Otaku Mode’s biggest Hatsune Miku fan lives in Sapporo and went to take photos and write this report for everyone!

SNOW MIKU 2019, the Snow Miku festival, was held between February 4 and 11, 2019. During the festival, Sapporo is covered in Hatsune Miku as far as the eye can see! The exhibition and merchandise sales at the main venue (SCARTS) and Sapporo Factory were conducted on February 9th and 10th.

Official merchandise and industry booths were lined up inside the venue. Banners featuring past Snow Miku designs were also on display.

The venue was filled with an air of excitement as fans were able to get their hands on the Snow Miku merchandise they had yearned for.

Just like last year, a Miku Car exhibition was held at the Sapporo Factory Chimney Plaza by Daihatsu and Miku Car owners. Plenty of Miku merchandise was displayed in the Miku Cars’ driver and passenger seats, giving the exhibit a lovable atmosphere.

At Sapporo Sosei Square, a new landmark that was completed at the end of 2018, merchandise sales, exhibitions, live shows, and workshops were held in the Sapporo Cultural Arts Community SCARTS. On the first floor, there were various SNOW MIKU 2019 illustrations, figmas, Nendroids, and other products on display. It’s Snow Miku’s tenth anniversary, so there were also huge panels, Nendroids, and plushies of past Snow Miku designs exhibited, too.

On the 2nd floor, workshops like the O-MIKU workshop, which was raved about at MIKU EXPO held overseas, and 4-panel comic coloring workshops were held. All the participants took their coloring seriously!

SNOW MIKU is an event that Hatsune Miku fans shouldn’t miss, so why not think about stopping by next time?

The next article will be all about SNOW MIKU LIVE! 2019! Make sure to check it out!

This is a Tokyo Otaku Mode original article by Usaco.

A New Class of Teen Mutants Shakes Up DAWN OF X in CHILDREN OF THE ATOM
Best Shots Rapid-Fire Reviews: AVENGERS #29, THE BATMAN’S GRAVE #4, More
Best Shots Advance Review: GUARDIANS OF THE GALAXY #1 (8/10)
MARVELS: SNAPSHOT Puts a Spotlight on CYCLOPS, CAPTAIN AMERICA, and More In April
Why HUGO WEAVING Wasn’t in AVENGERS: ENDGAME – and Why He Won’t be in THE MATRIX Sequel