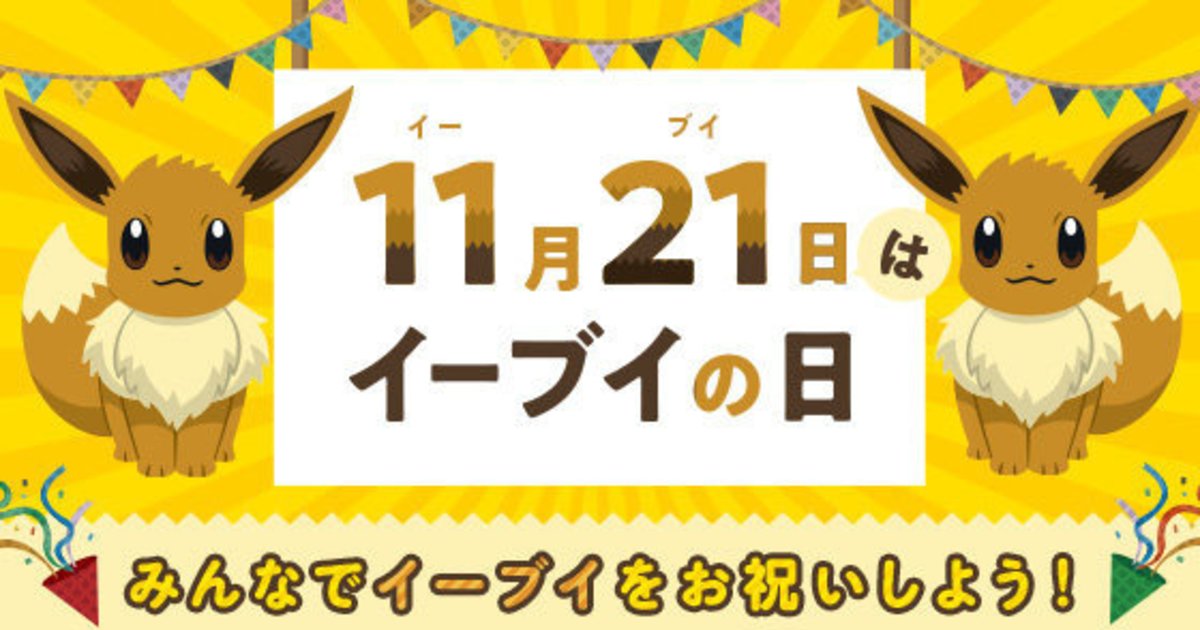 From now on, fans of the much loved Pokémon Eevee should make sure to clear their diaries every year for Nov. 21, because there’s now an officially recognized Eevee Day!

Formally recognized by the Japan Anniversary Society this year, Eevee Day plays on the Japanese pronunciations for the iconic Pokémon plus the numbers one and two.

This first Eevee Day has plenty of celebrations, including a special Twitter campaign in which 100 fans will be able to get their hands on prizes like the Nintendo Switch game Pokémon Let’s Go! Eevee and Eevee plushies. For a chance of winning, fans should follow the official Project Eevee account and add the #イーブイの日 hashtag to a Tweet featuring a celebratory message to Eevee, thoughts and memories, or photographs or illustrations and so on.

The campaign runs from Nov. 21 until Nov. 30 and there will be three different prize levels on offer each unlocked by reaching a certain number of Tweets with 121 Tweets unlocking Eevee ring files (70 available), 1121 Tweets unlocking sets of three Eevee Plushies (21 available), and 11210 Tweets unlocking the big prize of a Let’s Go! Eevee Poké Ball Plus set (nine available) signed by voice actress Aoi Yuki, who played Iris in Pokémon: Best Wishes!.

Eevee also took over Shibuya with special Eevee videos playing on public screens throughout the area and two branded Eevee trucks driving around the city.

With so much to enjoy for the first official Eevee Day, what do you think is in store for future celebrations?

Mob Psycho 100: Will Season 3 Ever Happen? | CBR
10 DC Characters Darkseid Has Never Beat In A Fight | CBR
Why It’s Important DC’s Nubia Is Both Powerful and Sexy | CBR
Skyrim: How to Find the Headless Horseman | CBR
The 10 Funniest Quotes From Rick & Morty | CBR