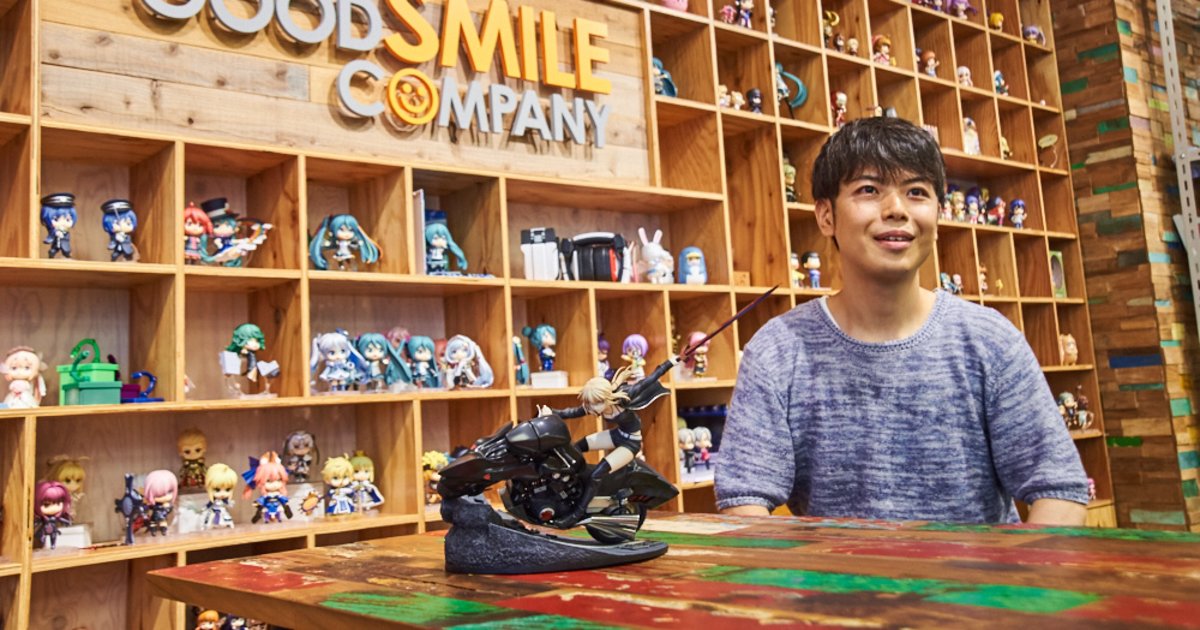 In the latest entry of “The Art of Figure Making”, an interview series that brings you stories behind the creation of your favorite figures, we hear from Shutarou Hirase of Good Smile Company. From coloring to posing and the creation of the base figure itself, Mr Hirase’s latest figure of Saber/Altria Pendragon (Alter) & Cuirassier Noir is truly a labor of love. Read on to learn about the process behind it!

Hirase: My name is Hirase, and I work in Good Smile Company’s Planning Department. I turn 32 this year and I’ve been at Good Smile Company for eight years now. Currently I’m in charge of products from the Fate series, Touken Ranbu – Online-, and Capcom works like Mega Man and Monster Hunter. And… I do a variety of things.

—Were you part of the Planning Department from the start?

Hirase: Yes, it’s the department I entered when I joined the company.

—This may be a personal question, but how does GSC divvy up the different series among everyone? I feel like you’re in charge of a lot of top content. You must be one of the aces of the department.

Hirase: (laughs) It’s on a case-by-case basis, but usually we volunteer for it. We tell our bosses if we want to do a specific series, and it’s decided after some discussion. Of course, sometimes they tell us it might not be possible, but luckily, I usually get the opportunity to try new things for most of the titles I’m responsible for. Usually our company supports the spirit of challenging new things, which makes it very rewarding, and I feel that it suits me very well.

—That’s amazing. How many products do you handle a month?

Hirase: About 3-4 products, including Nendoroids and scale figures.

—I have the image that GSC is always pushing forth different products for different titles at the same time.

—I’d like to ask about the figures that you were responsible for.
There are a number of characters in the Fate series named Altria Pendragon, so I’d like to know why you chose the one from “Singularity Subspecies I: Malignant Quarantined Demonic Realm: Shinjuku: Shinjuku Phantom Incident”.

Hirase: I saw the trailer for “Singularity Subspecies I” right when the first part of the main story had ended. We still didn’t know what Part 1.5 was going to be like, and in the midst of that excitement, known Servants and unknown Servants appeared one after the other in the trailer. Then Altria (Alter) showed up in her personal clothes, a different outfit to her usual armor. When I saw that, I was like, “Whoa, what’s this?” Then, Cuirassier showed up racing down the highway in her black outfit, making me feel confused and surprised by how I both knew and didn’t know what was going on. The trailer made me really want to bring it into 3D, so I chose this character.

Hirase: All the time (laughs). Not a day goes by where I don’t login. I play it so much that my AP (stamina points) never get filled up all the way.

—I’m sorry to bring up something unrelated, but the person in charge of FGO products of a different company also plays it all the time. He said he didn’t know how much money he’s spent on it (laughs).

Hirase: I believe it! (laughs)

—We get the impression that FGO is really well-known throughout the industry and a lot of people play it.

Hirase: A ton of people play it. Even when I’m in meetings with licensers that aren’t related to FGO, we’ll talk about the current gacha (random character or item drop). There are plenty of people within the industry who like FGO and play it even if it has nothing to do with their jobs.

—Let’s go back to the topic at hand (laughs). I’m sure creating a figure of Altria Pendragon was rather complicated. How did you decide on the pose?

This version of Saber is an Alter. I imagined how this Alter version of her would be riding the Cuirassier with skill.
The Saber in Fate/ZERO wears a suit and quietly burns with fighting spirit, but this time I wanted to see her wildly riding the bike like a horse and doing a wheelie.

“Singularity Subspecies I: Malignant Quarantined Demonic Realm: Shinjuku: Shinjuku Phantom Incident” is set in Shinjuku. I imagined that there were probably sections of the road throughout the ruined city that have torn up asphalt and rubble. By making the broken road the pedestal of the figure, I was able to get her wheel to lift up in the air to make her look like she was riding wildly.

The Cuirassier is rushing through the city toward some enemies. I was able to expand my mental image of the figure to have her racing forth with Excalibur Morgan in her hand as she slices through them.

Since I didn’t have an illustration to base the figure on, I used various action figures, such as figmas, to create the pose through trial and error and looking for the coolest angle possible.

—I feel like there’s a lot of information packed into this figure. If you had to choose, is there a specific part that you really focussed on?

Hirase: From the very beginning, I wanted to put the most effort into Altria herself. I had already thought of the Motored Cuirassier as the finished base for the bike, after all.

When I first started creating the mold, I went through a lot of trial and error figuring out the angle of her arm and how far she was leaning, but I realized that the angle of the bike was quite important. At first, the bike was higher in the air and the front wheel was more parallel to the ground, but I realized that it didn’t pack much impact. What gives the figure its intensity is how far the bike is leaning and the angle at which Altria is riding the bike. I was extremely particular about those two points.

—It feels like GSC puts a lot of effort into racing figures. After all, the bike in this figure is constructed so beautifully. Please tell me more about it.

Hirase: I used the Fate/ZERO version of the bike as the mold. That figure was developed by Kawahara Takayuki, who has an extraordinary passion for bike molds. As a result, the mold for the Fate/ZERO version of the Cuirassier was already extremely high level.
The YAMAHA V-MAX was the original model for the bike, so I looked over the balance of the body and other points again and also added the fictional exterior parts.

This version of the bike, the Cuirassier Noir, has a part that’s been redecorated from the older version. The new handle has a slightly different angle, and I adjusted it some more to make it show off Altria (Alter) at her strongest. At the original angle, she would have had to have the arm gripping the handle stretched out to its max, so I made her upper arm closer to her body.

I was also very particular with the coloring. At the beginning, I gave the Cuirassier Noir a glossy coating. The reason behind this is that I wanted it to gleam when it came to the customer’s home. When I showed it to the publisher, they pointed out that it looked too realistic. They said, “**FGO** is a fantasy. We want you to make it look as if it would be swallowed up by darkness so that it fits perfectly with the word “pitch-black” .” I incorporated their opinion into the figure and presented them with another version that wasn’t as glossy. The final version is a lot more matte than the original. The black is more toned and it looks like it would swallow up everything, even light itself.

Since I made more parts matte, the red and clear parts look better now. When it was very glossy, the clear parts tended to fade into the background, but the contrast of the current version expresses it better.

—How long did the process take between suggesting the idea and completing the prototype?

Hirase: It took more than a year and a half…

Hirase: Regular scale figures also take more than a year, but for this, we didn’t have any illustrations to use as a base. Of course, we had designs and illustrations for the Cuirassier and Altria’s clothes, but from there on the posing was completely original. I created the pose using action figures like figmas through trial and error and got permission for that from the licenser. Then, I had to create figures for the basic body using putty. If I didn’t like the angle I would cut off the part and make it lean forward a little more and so on… I repeated the cutting off and reattaching of parts countless times. I think creating just the protoype took close to a year.

—From what you’ve told us, I feel like the exchanges between you and the licenser went pretty smoothly.

Hirase: When I said I wanted to create a figure with motifs that would be the opposite of the Fate/ZERO Saber, they willingly OK’d it. However, Aki, the president of GSC, told me that I should make her look wilder when I said that I wanted to make it with opposite motifs. I thought that it was already enough, but Mr. Aki offered opinions like leaning the bike forward more to give it more momentum, and we held many discussions about it. After the project began to progress, we continued to brush up various parts throughout the entire process.

—You mentioned Mr. Aki – so he was involved in discussions from the beginning of the project?

Hirase: Yes, he was. Aki liked the Saber from Fate/ZERO and he worked hard on that product. Making a figure that’s the complete opposite of a product like that is a lot of pressure and I knew that I had to discuss it with him. That’s why I carried the project forward by telling him at the beginning that I wanted to make a figure that had motifs that were the exact opposite of the Fate/ZERO Saber.

—To conclude, is there anything you’d like to say to overseas fans? Incidentally, this figure is among the top-selling figures on the TOM Shop.

Saber/Altria Pendragon (Alter) & Cuirassier Noire is a product that I’d been waiting to release until the time was ripe. I think every FGO fan has their own picture of Altria (Alter). This figure uses original motifs without any preexisting illustrations as its base, so I thought it would be bad if it was inconsistent with the image of Altria (Alter) that everyone holds. Since I’m an FGO fan myself, I’m confident that I spent enough time developing the figure so that it doesn’t stray from the character’s nature and so that it shows in the figure itself. I would love for you to pick it up yourself. I believe that anyone who buys it won’t have any regrets.

—Thank you very much.

This is a Tokyo Otaku Mode original article.
Interview by Hiwatashi
Photography by Takemori